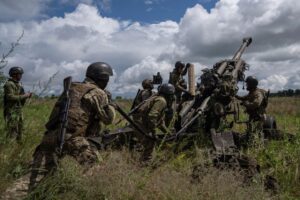 The Pentagon has launched a wide-ranging push to speed up sales of U.S. arms to foreign allies in an effort to better compete with China and refill the arsenals of friendly nations that have given military gear to Ukraine.

The Pentagon last month created a task force of senior officials to examine longstanding inefficiencies in U.S. sales of billions of dollars of weaponry to foreign countries. The so-called “tiger team” will look at ways for the Defense Department to streamline parts of the program, according to a senior defense official, with the aim of putting coveted American drones, guns, helicopters, tanks and other weaponry into partners’ and allies’ hands faster, officials said.

Increasing tensions with China and Russia’s invasion of Ukraine have brought urgency to the review, which began within the Pentagon about a month ago, officials said.

The Pentagon executes much of the foreign arms-sales program but it is overseen by the State Department, which uses the $45 billion in annual weapons sales as a foreign-policy tool to spread American influence. Congress ultimately approves all foreign military sales.

U.S. officials who work with countries on initial requests for new drones, for example, could be trained to help those countries to draft those letters better, removing roadblocks that pop up because the initial request was too broad or triggered other security concerns, the defense official said.

“It’s about the mechanical steps in the process,” said a senior defense official. “How can we do a better job of bringing inefficiencies out of the system that will apply to all of the countries that we work with?”

What must the Pentagon do to fix the foreign arms-sales program? Join the conversation below.

Additionally, with certain systems, the Pentagon approves contracts only once a year, so orders that miss that deadline are held until the next cycle, the officials said. The State Department, which ultimately oversees foreign military sales, is providing input to the Pentagon-driven assessment.

The foreign military sales program has long been seen by lawmakers, industry and government officials as risk-averse and sluggish. Concerns about selling a piece of sensitive technology can slow a sale for years. Officials can scrutinize a country’s military to see if it has competent troops to operate the equipment and safeguards to keep it secure.

That slow pace can leave some countries unsure if the U.S. really wants them as partners and risks sending countries with whom the U.S. wants to stay close elsewhere to shop for arms. Officials in Washington say they must deepen their relationships in a global competition with China that is often measured by who can sell the best, most sophisticated military gear the quickest, and at the cheapest price.

Former Secretary of the Navy Richard Spencer said he welcomed the Pentagon review but warned the Pentagon often applies Band-Aids instead of conducting an overhaul.

“The building has to get agility,” he said. “We are sclerotic, we are arthritic, we have to get over it.”