America Could Face Its Own Gas Crisis, or Worsen Europe’s 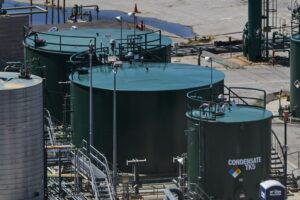 The summer heat isn’t quite over in the U.S., but a peek at domestic natural-gas stockpiles is a chilling reminder of price spikes that could surface during the winter—and of even more danger for Europe.

U.S. natural gas inventories inched up by 61 billion cubic feet in the week ended Aug. 26, according to data released Thursday morning by the Energy Information Administration. That leaves stockpiles 11.3% lower than their five-year average—a gap that has widened throughout the so-called injection season, when natural-gas inventory builds up ahead of winter.
The largest driver of natural gas demand growth this summer has been power, which accounts for roughly 37% of U.S. consumption. Hot weather drove much of that as households and offices cranked up air conditioning. Its pull on natural gas was particularly high this summer because there was less switching to coal, which itself has seen a price surge, according to Jack Winters, North American natural-gas analyst at S&P Global Commodity Insights.

There are still two months left in the seven-month injection season, but natural-gas prices are already at levels last seen in 2008, a year when the U.S. was producing 43% less of the fuel than it did in 2021. U.S. natural gas benchmark Henry Hub futures briefly touched $10 per million British thermal units last week. Prices edged up slightly after the EIA’s storage report on Thursday morning to roughly $9.17 per MMBtu. The sticker shock is far worse in Europe, where front-month natural-gas futures are trading at the equivalent of roughly $70 per MMBtu as Russia chokes off supplies.

With Europe facing actual physical shortages, the wild yet less-extreme price action in the U.S. could appear overdone since markets are so disconnected. While the U.S. is the world’s largest exporter of liquefied natural gas, the maximum amount of LNG it could send off to Europe and Asia is capped around 13 billion cubic feet a day, or roughly 11% of domestic natural gas production.

Rational or not, the early price action shows that domestic natural-gas prices are highly sensitive to headlines abroad. This could portend severe natural-gas price volatility this winter that will not only depend on weather conditions here but also on the whims of the Kremlin.

There are some unpredictable wild cards from Mother Nature. A hurricane could sway natural gas storage numbers either direction—depending on whether it disrupts natural gas production or shuts off demand. And a cold winter could deplete storage rapidly.

On the margins, natural gas pricing could also move based on when Freeport LNG, a liquefaction terminal that shut down after a fire in early June, comes back online. If Freeport LNG had kept liquefying 2 bcf/d of natural gas at full capacity through the summer, the latest storage gap relative to the five-year average would be 16% instead of 11%. Henry Hub prices fell after Freeport announced last week that its facility would only start liquefying and exporting natural gas in mid-November, later than the October restart date it telegraphed earlier.

And then there is the potential for resource nationalism that could compound Europe’s woes. Last year, an industry group representing manufacturers urged the Energy Department to require a reduction in LNG exports to allow the U.S. to fill up more natural gas in storage. Although the DOE hasn’t commented on LNG exports thus far, Energy Secretary Jennifer Granholm did send a letter to oil refiners urging them to focus on building U.S. inventories.

Even the best friendships can be chilled when the mercury drops.

0
2022-09-02
sc
Previous: The Army urgently buys winter clothing after running out of stock due to shipment to Ukraine
Next: Pentagon Aims to Speed Arms Sales to Allies to Better Compete With China
Subscribe
2 Comments
Oldest
Newest Most Voted
Inline Feedbacks
View all comments