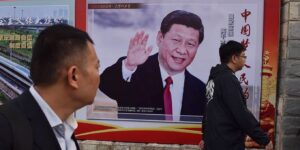 Since the days of Deng Xiaoping, economic growth has mattered more than anything for China’s leaders. The 10% annualized hyper-growth from 1980 to 2010 was widely seen as the antidote to the relative stasis of the Mao era, when the economy grew by only about 6%. But under President Xi Jinping, the pendulum has swung back, with 6.6% average growth from 2013 to 2021 much closer to the trajectory under Mao than under Deng.

Some of the slowdown was inevitable, partly reflecting the law of large numbers: Small economies are better able to sustain rapid growth rates. As China’s economy grew – from 2% of world GDP in 1980 at the time of the Deng takeoff to 15% when Xi assumed power in 2012 – an arithmetic slowdown became only a matter of time. The surprise was that it took so long to occur. It is possible to quantify the foregone Chinese output from the slowdown. Had annual real GDP growth remained on the 10% trajectory under Xi, rather than slowing by nearly 3.5 percentage points since 2012, the Chinese economy today would be a little more than 40% larger than it is. Yet the China slowdown is far more than an arithmetic event. Three powerful forces are also at work – a structural transformation of the economy, payback for past excesses, and a profound shift in the ideological underpinnings of Chinese governance. The structural explanation puts an optimistic spin on the slowdown by framing it as the byproduct of a strategy aimed to improve the quality of economic growth. By staying the course of hyper-growth for too long, China became increasingly afflicted with the “four uns” of former Premier Wen Jiabao – an economy that was unstable, unbalanced, uncoordinated, and (ultimately) unsustainable. Rebalancing was the only way out – especially if it led to greener, consumer-led, and services-intensive growth that addressed the twin goals of balance and sustainability. If slower growth was the price, it was well worth paying it. For a while, the structural slowdown appeared to be on track. Services-led growth boosted job creation and urbanization provided a powerful impetus to real incomes. Even though consumption was still lagging due to a weak social safety net that spawned excess precautionary saving, there was good reason to believe in the likelihood of a structural transformation. But the case for a structural slowdown was not without its downside – especially a worrisome weakening in Chinese total factor productivity growth, as well as stiff demographic headwinds from the one-child family-planning policy in effect between 1980 and 2015.

But there is good reason to believe that China’s slowdown may also be more of an unavoidable payback for the excesses of the hyper-growth era. This line of reasoning was, in fact, telegraphed in 2016 by a high-profile interview with an “authoritative person” published on the front page of the Communist Party’s organ, People’s Daily, which warned of the potential Japanization of an increasingly debt-intensive, bubble-supported Chinese economy. An overly leveraged Chinese property sector fits this script, as does the debt-fueled expansion of state-owned enterprises since the 2008-09 global financial crisis. For China, this became the case for deleveraging, well worth the short-term price to avoid the longer-term stagnation of Japan-like lost decades. Finally, a major reversal in the ideological underpinnings of governance is also at play. As the revolutionary founder of a new Chinese state, Mao emphasized ideology over development. For Deng and his successors, it was the opposite: De-emphasis of ideology was viewed as necessary to boost economic growth through market-based “reform and opening up.” Then came Xi. Initially, there was hope that his so-called “Third Plenum Reforms” of 2013 would usher in a new era of strong economic performance. But the new ideological campaigns carried out under the general rubric of Xi Jinping Thought, including a regulatory clampdown on once-dynamic Internet platform companies and associated restrictions on online gaming, music, and private tutoring, as well as a zero-COVID policy that has led to never-ending lockdowns, have all but dashed those hopes. Equally important has been Xi’s fixation on national rejuvenation, an outgrowth of his so-called Chinese Dream that has led to a far more muscular Chinese foreign policy, in sharp contrast to Deng’s more passive “hide and bide” stance. Not by coincidence, this has fueled the trade and tech wars with the United States, given rise to China’s “unlimited partnership” with Russia, and stoked tension over Taiwan – all of which point to the unwinding of globalization, which had long benefited China more than any other country. My mistake was to give China too much credit for devising a structural antidote to Wen’s “four uns.” That led me to place too much weight on the benign forces of rebalancing as a rationale for higher quality economic growth. I worried a lot about Japanization risks, but mainly as symptoms of a failed rebalancing. That led me to double down on rebalancing, arguing that structural transformation was China’s only real option.
My biggest mistake was to minimize the consequences of Xi Jinping Thought. Xi’s focus on ideology speaks much more to the resurrection of Mao’s legacy than to continuity with the Deng era. Under Xi, China’s new era is more about the supremacy of the Party, with an associated emphasis on power, control, and ideological constraints on the economy. Unlike the China of Mao, when there wasn’t much growth to sacrifice, there is far more at stake today for the world’s second-largest economy. With the upcoming 20th Party Congress likely to usher in an unprecedented third five-year term for Xi, there is good reason to believe that China’s growth sacrifice has only just begun.

0
2022-08-29
sc
Previous: Wall Street predicted Russia’s economy would collapse after it invaded Ukraine. These 3 charts show that hasn’t happened.
Next: The war in Ukraine in the last two months is primarily responsible for the increase in energy prices, says economist Matesová
Subscribe
0 Comments
Inline Feedbacks
View all comments