Premier: I will propose the suspension or reduction of CO2 emissions charges 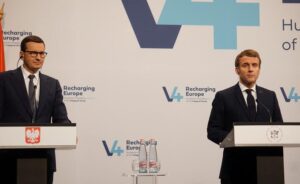 Prime Minister Mateusz Morawiecki said, that he will once again propose a suspension or reduction, To the level 25-30 euro per ton, fees for the right to emit CO2. Emmanuel Macron receives Prime Minister Morawiecki on Monday – informs the Elysée Palace

Security topics, energy themes, cooperation topics – these are threads, which we will be moving – Prime Minister Mateusz Morawiecki said on TVP Info when asked about the upcoming meeting with the President of France, Emmanuel Macron.

Also read: Prime Minister's meeting with Macron, the topic of conversation is security

He considered economic issues to be particularly important – translating, that the war in Ukraine completely destabilized the entire European Union, many economies are shaking, and societies are protesting. He stressed, that, in his opinion, this "putinflation" is also hitting the French and the Germans.

I want to propose to President Macron, to hang, at least for a while, or at least reduced to some acceptable level, 25-30 euro per ton, fee for CO2 emission allowances – Prime Minister Morawiecki said. He recalled, that he had already proposed it last year, because Putin's gas blackmail began in the fall, even before the outbreak of the war.

We want to work together to change the energy system yes, that European industry does not leave Europe – handed over by the head of government.

Another topic of talks is the military strengthening of Europe.

I hope, that here too President Macron will stick to the principle, that NATO is the most important, North Atlantic Pact, which gives us security – said the prime minister. "We are a member of the strongest military alliance in human history" – added. He remarked, that it is important to strengthen this alliance, also by strengthening our army.

President Emmanuel Macron receives Prime Minister Mateusz Morawiecki on Monday, to discuss support for Ukraine in the face of Russia's aggression and the consequences of the conflict for Europeans – announced the Elysée Palace on Thursday night.

In addition to the war in Ukraine, leaders at a meeting at the Elysee Palace in Paris will discuss the challenges of European sovereignty in the field of defense and security, as well as cooperation for the full security of Europe's eastern flank, said the Elysée Palace, cited by the AFP agency.

The AFP agency recalls, that “Poland is one of the most unconditional supporters of Ukraine's membership in the EU, and also to the countries most critical of Russia, unlike Germany and France, whose positions were sometimes more cautious ".