Boualem Sansal : “Thanks to Putin, Algeria has found a way to force France to permanent repentance and humiliation” 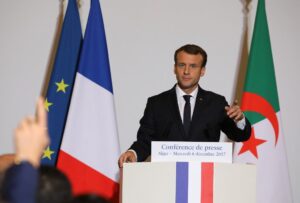 Emmanuel Macron must go from 25 August in Algeria for a three-day trip aimed at “reviving bilateral relations”. How badly do they need it ?

Boualem Sansal : In the facts, none, but for cinema and secret files, it's useful. New Algeria, this is the new name of the country, you absolutely have to keep it, which succeeded the Obscure Algeria of the Bouteflika Brothers, is built on the fierce hatred of France and the permanent denunciation of its colonial and postcolonial crimes. The deposit has been dried up for half a century but the new power has chosen to ignore it, he exploits it without profit, with heavy repercussions on the environment.

The problem for him is that to denounce France, force him to silence, to permanent repentance and humiliation, we must have the means to constrain it and, stroke of luck, New Algeria has them in abundance thanks to Putin's divine intervention against the depraved West, thirsty for wealth : it is the commercial contracts that it waves at the end of the line and the hydrocarbons without which France will not pass the winter. What the new Algeria wants from this meeting with Macron is that he help it very effectively to build the reputation of a country that counts., which succeeds better than Morocco, and that he aligns himself with his positions in the Western Sahara file to shock Morocco and Spain. We are really in deep psychology.

President Macron responds to the invitation of his counterpart, Abdelmadjid Tebboune, but does the power in Algeria really seek to ease the tensions ?

Macron is not naive, he knows very well that the leaven of the new Algeria is aggressiveness, the threat, the strategy of tension on its partners to dissuade them from interfering in its affairs. But Macron himself needs to strain the power of New Algeria to exhaust it., to lead him to compose as responsible adults. Under cover of the European Union, he will put friendly pressure on her to encourage her to reform, to modernize oneself, lift the foot on repression, release political opponents and journalists. He knows that New Algeria is very keen to show that it is a virgin, that she is a pure victim, and that she has the right to give moral lessons to the whole world.

In the current situation, and in particular in view of the way in which the Algerian regime plays to the full on the “memorial rent”, is it realistic to believe that the relationship can calm down if France tries to calm things down ?

But who wants to ease the tensions ? Nobody. Now is not the time to let our guard down. When you can't resolve a crisis, you have to push the fires and make it worse as much as possible to reshuffle the cards and change the balance of power. I believe that Macron plays chess well but the new Algeria plays dominoes excellently. We will see who will win.

It must be taken into account that New Algeria has broken with the West, with Africa weathervane and the Arab world fascinated by Israel, she joined the BRICS :: only big ones, to which she will bring a lot. And receive from them, of course.

Is it still possible to improve Franco-Algerian relations on a sound basis? ? What could this be going through ?

Between Algeria and France, it is perfectly possible and more than desirable. There are many things that bring them together, and of course some that oppose them, but between intelligent people, it's child's play to find the right path. But between France and New Algeria, I do not believe, it will all end badly. Firstly because France does not believe in this Algeria, news by who knows what miracle, that must be brought into line and because New Algeria sees in France only colonial France to be humiliated.

Would seeking to appease relations at all costs be a mistake in the current circumstances?, in view of what the Algerian power is ?

For the new Algeria, Macron's visit in a repentant costume is all for the benefit. The context is all right. Algeria crushed Spain, muzzled Morocco, lectured Tunisia, gas money is flowing, the people are calm, the army is watching, and the second term of New Algeria promises to be a small formality.

For Macron, it's pretty dangerous. It's a bit like going to Canossa, the case feels a bit like a trap. If he returns without at least these two results, he will have a hard time showing himself before long, but the start of the school year is here, he will be challenged on all sides. 1) acceptance by Algiers to receive a substantial number of OQTFs ; 2) increase oil and gas production to relieve Europe, starved by Putin.

0
2022-08-25
sc
Previous: Gas crisis: to understand the reasons, one must not look at the war in Ukraine but at China and India
Next: Does Ukraine Have Hope of Recapturing Russian-Held Kherson?
Subscribe
0 Comments
Inline Feedbacks
View all comments