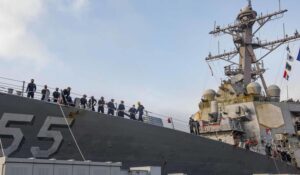 he Pentagon calls China its primary “pacing challenge” and Russia a major threat to the world order, but the Navy may be facing an even more formidable and insidious challenge to its fleets from within: rust.

The U.S. Navy is fighting a never-ending battle against the unsightly reddish-brown streaks and patches caused by the destructive combination of steel hulls, oxygen and seawater. Despite the millions of man-hours and billions of dollars spent combating corrosion in the fleet, some fear rust is winning the war.

The Navy’s top admiral has acknowledged how crucial the anti-rust campaign is for the service, militarily and aesthetically.

“Appearance is important. You’ve got to look sharp,” Adm. Mike Gilday, the chief of naval operations, said in April at the Washington-based Center for Strategic and International Studies. “We’re the world’s premier navy, [and] we’ve got to look like it.”

A rust-stained destroyer or supply ship might be an eyesore, but the problem is far more than cosmetic. If left untreated, rust can cause serious structural damage to a ship.

“It’s a necessary function. If you don’t take care of your hull, you shouldn’t be shocked when it falls apart,” said retired Navy Capt. Carl Schuster, who teaches history and international relations at Hawaii Pacific University. “Rust has less than a third of the strength of regular steel.”

Critics say the Navy needs more ships to operate at a much faster mission tempo. They blame environmental concerns about abatement practices and say the COVID-19 pandemic has prevented vessels from pulling into ports for maintenance.

“This has changed the way we have approached the maintenance of our ships,” said retired Navy Capt. Jerry Hendrix, a senior fellow with the Sagamore Institute. “These ships are accelerating in their degradation.”

The Navy denies neglecting shipboard preservation. Cmdr. Arlo Abrahamson, a spokesman for the commander of naval surface forces in the Pacific, said the command’s crews devote “considerable time and energy” to balancing operational requirements and maintenance needs of their warships.

“We take a methodical approach to preserving our ships, synchronizing efforts with other maintenance requirements to ensure ships are ready and fully mission-capable,” Cmdr. Abrahamson said in a statement to The Washington Times. “We address these preservation challenges quickly at sea, after ships return to port, and during maintenance phases.”

Cmdr. Abrahamson pointed to the example of the USS Benfold, a guided-missile destroyer whose captain created a full-time maintenance group focused on preventing external shipboard corrosion, even while at sea.

“The team is hands-on busting rust, priming or painting every day except Sunday,” said Petty Officer 1st Class Alexander Polk, who is part of the Benfold restoration team. “Every week, we conduct a job review board and discuss upcoming jobs.”

Keeping a ship looking good doesn’t come cheap. Recent estimates are hard to come by, but a 2014 Pentagon study put the cost of keeping the rust off of Navy ship hulls at $3 billion a year — a quarter of all maintenance budget costs. Navy officials say the war with rust is a “never-ending challenge.”

Most navies operate in their own waters and stay closer to shore, allowing more time and opportunity for maintenance, but the U.S. Navy deploys fleets around the world. The rust problems also affect how other countries see the U.S. Navy, Capt. Hendrix said.

“It’s having an impact on our standing in the world. That’s something the Navy really needs to come to grips with,” he said. “Influence is greatly tied to perception. If the perception is that your ships look terrible, that’s the perception of the country: ‘Our fleet is old and it’s tired and that we as a nation are old and tired and appear run down.’”

Like other military branches, the Navy is contending with serious recruiting and retention problems. Capt. Schuster said he is concerned that the problems have resulted in a lack of internal discipline and a sense of complacency.

“If you’re not willing to maintain the ship and preserve the hull and superstructure, what else are you ignoring in terms of maintenance?” he asked. “What else are they not taking care of?”

He said the Navy “lost its way” after the collapse of the Soviet Union and the end of the Cold War.

“You never knew when the Russians were going to war. But now, for 30 years, we haven’t had an opponent at sea,” Capt. Schuster said. “The Navy got away from the fundamentals because we didn’t have to worry about the fundamentals.”

Veteran naval journalist Chris Cavas was even blunter in a commentary last year for the military news website Task and Purpose. “We have become the worst-looking Navy in the world — with no competition,” he said. “When you look at a ship from a European navy or the Chinese navy, for example, they will make that ship pristine before it deploys.”

Indeed, photos of gunmetal-gray U.S. Navy vessels with reddish lines of rust streaming down their sides have become something of a subgenre on military-themed websites and social media.

The dry cargo ship USNS Washington Chambers gained some unwanted fame when it was caught on film pulling into San Diego Bay in December 2020 with rust seemingly eating away at the length of its hull from the deck to the sea line. The Navy had put it into service just 10 years earlier.

Navy Command Master Chief Andrew Thomasson, the senior enlisted sailor aboard the USS Benfold, said his sailors take great pride in the condition of their ship.

“When a ship looks pristine, new and looking her best, our enemies hesitate to mess with us because when we’re looking our best, we obviously must be performing at our best,” he said. “And just the opposite when we look dirty and rusty. When a ship is looking her best, just look at it as saving lives.”

Capt. Hendrix said the appointment of Carlos Del Toro as secretary of the navy is a good sign for shipboard maintenance. Mr. Del Toro spent 22 years in the Navy and was the 1st commanding officer of the USS Bulkeley, a guided-missile destroyer.

“The reputation of that ship while he was in command was superb — both in performance and appearance,” he said. “He understands the importance of the material condition and appearance of ships.”