Ukraine war concern for internal security: The Office for the Protection of the Constitution warns of Russian "false information" about gas shortages 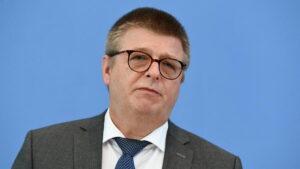 The President of the Federal Office for the Protection of the Constitution, Thomas Haldenwang, has warned of the effects of the increasing crises on internal security in Germany.

Observe his authority, “that a radicalized minority of right-wing extremists, delegitimizers, Reich citizens and conspiracy believers position themselves, about issues like the war in Ukraine, rising prices, to occupy inflation and the corona pandemic and to abuse it for mobilization", said Haldenwang on Wednesday in Cologne. "It's aggravating, that Russia uses instruments such as cyberattacks and disinformation as hybrid levers, to divide society in Germany.”

In particular, Russia is targeting issues relating to Europe's energy supply. According to the Cologne Federal Office, Russian actors are trying, with the “targeted dissemination of false information” about gas shortages and price increases, for example, fear of a potentially existentially threatening energy- or fueling food shortages in Germany.

The background is the uncertainties about Russian gas supplies. That this could subsequently lead to social upheaval and political disputes, recently triggered concern in politics. Bundesinnenministerin Nancy Faeser (SPD) warned of radical protests and attacks on gas terminals and other critical infrastructure.

According to Haldenwang, so far there have been “no signs of widespread anti-state protests or even violent mass riots”.. Nevertheless, the Office for the Protection of the Constitution sees increasing risks for internal security. "The Russian war of aggression against Ukraine and its possible effects on the economy and supply situation in Germany harbor a high potential for instrumentalization for extremist groups and state influencers", explained the authority.
Russia also uses “fears and measures, associated with the corona pandemic, for appropriate propaganda activities". The Federal Office assumes so, that Russian propaganda in the extremist milieu is likely to increase and fuel conspiracy narratives with the aim, "to drive a wedge in our society".
According to the Office for the Protection of the Constitution, various actors in Germany are already focusing on the content of the Ukraine war, to use its effects for mobilization. For example, in the right-wing extremist spectrum of parties, the aggravated economic situation is attributed to a "supposed incompetence" of the democratic parties, and price increases would be presented as a result of globalization. "The goal is, To instrumentalize resentment and growing problems in the everyday life of the population, all the more trust in the state in the long term, to undermine government and democracy”, state the constitutional protectors.

The regional party “Freie Sachsen” is pursuing such a strategy., which, in addition to criticism of the corona protection measures, is gradually increasingly addressing social issues. “The party thereby constructs an alleged alienation of the democratic parties from the population and tries, to present themselves as a socio-political alternative.”

According to the secret service officials, the AfD is currently taking up the topic of inflation more and more, classified by the Office for the Protection of the Constitution as a suspected right-wing extremist. New right-wing organizations also refer to the topic, who are close to the AfD, like the association “One Percent”.
Security officials have repeatedly expressed concern, that extremists might try, to exploit protests for their own ends, such as the Reich citizens in the corona pandemic. Brandenburg's head of the Office for the Protection of the Constitution, Jörg Müller, warned against this, that extremists could take advantage of the energy crisis and high inflation. But there are also warnings about it, that organizations could be infiltrated.

Hamburg's head of the Office for the Protection of the Constitution, Torsten Voss, said recently, he is concerned about a change in strategy in the post-autonomous scene. these attempts, to sneak into organizations about widely discussed topics. “The violence-oriented interventionist left must be mentioned in the forefront, the popular topics such as sea rescue, Commitment against environmental destruction, Right-wing extremism or high rents exploited for themselves.”

The Federal Office for the Protection of the Constitution observes, that in the left-wing extremist scene the field of action "anti-militarism" has "gained in importance" since the start of the Russian war of aggression. "Especially defense contractors, but the armed forces and political parties are also the focus of violent left-wing extremists.", states the Federal Office. The first property damage had already occurred. Blockades and acts of sabotage must also be expected.

The continued use of fossil fuels also plays a major role for left-wing extremists. “The scene tries, to link well-known narratives with the topics of climate protection and sustainability and to radicalize legitimate democratic protest", explains the protection of the constitution. Corresponding activities against the fossil infrastructure are in view.

0
2022-08-18
sc
Previous: Comment, in Africa, Paris has lost the "information war" against Moscow
Next: Syria received stolen Ukrainian grain, According to the Embassy of Ukraine
Subscribe
0 Comments
Inline Feedbacks
View all comments