"final text" tactic | Iran and Russia are not "oil rivals". | A condition for revitalizing the JCPOA | China welcomes the unraveling of the JCPOA 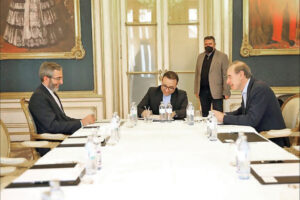 The special emphasis of the western parties in the JCPOA negotiations that the negotiations have come to an end and now is the time for Iran to make a decision, rather than a deadline for the end of the talks, is considered to be another reason to put pressure on Iran with the aim of falling short of its rightful positions.. fellow-citizen- Alireza Ahmadi: The former diplomat of our country told Hamshahri about the latest status of negotiations: The fact that Josep Borrell, as the foreign policy official of the European Union and other western parties use the keywords "final text" and "sufficiency of negotiations", their goal is to put pressure on the Islamic Republic and somehow warn our country if this agreement and text is not accepted. There will be no negotiations, and in fact the dialogue programs in Vienna will be closed; An approach through which they try to influence Iran's behavior by exerting pressure to accept their conditions..

Mohsen Pakayin added: The use of these keywords shows that the western side seeks to impose its ideas on the negotiators of our country and plans to use the created psychological atmosphere to accept a "bad agreement" from Iran and somehow impose it on us..

He continued: The point is that the Islamic Republic considered the agreement effective from the first day if both parties are committed to its implementation; That is, from the beginning, we were looking for "implementation of the commitment against the implementation of the commitment".. The Americans withdrew from the JCPOA and did not fulfill their obligations and re-imposed sanctions against our country and added extra-JCPOA sanctions.. After some time of waiting and patience, we suspended our JCPOA obligations and in a logical move based on JCPOA and legal provisions, we abandoned our nuclear commitments and reduced the imposed restrictions..

The former president of our country said: The approach adopted by Iran against the other side's bad faith was our "right" and with such a logical view and approach, we entered the new round of JCPOA negotiations in Vienna and we are following up the talks in the same framework.. It is on this basis that we do not accept any imposition and Iran fulfills its obligations only if the American side also cancels the sanctions and guarantees that it will not apply JCPOA and post-JCPOA sanctions again. It does not create the purpose of investing and starting economic activities in Iran.
Pakayin clarified: If this is achieved, then it can be said that a "mutual agreement" has been reached that both parties will benefit from.. In fact, once again we will accept the nuclear restrictions and they will also cancel the sanctions and the economic relations of the Islamic Republic with the world will return to normal..

He said that some speculations that "China and Russia do not want to sign an agreement in the current situation" have no basis in reality.: This is also a part of the strategy of the Americans who intend to take the responsibility off the shoulders of this country and try to hold other countries responsible for the possible failure of the negotiations.. Pakayin added: This is despite the fact that if the economic relations of the Islamic Republic with the normal world and the sanctions are canceled, China can make more extensive investments in Iran.. In fact, a special situation will be created for this country that can invest in Iran, and in such a situation, both parties will benefit and benefit.. He continued: Therefore, China also welcomes the untying of the JCPOA and the removal of existing obstacles, because Beijing is currently under pressure from the United States to cooperate with Iran, and under normal conditions, this pressure will also be removed from their shoulders, and they can more easily make more profitable investments in Iran. to be.

This international issues expert said: Regarding Russia, definitely after the lifting of sanctions on Iran, more economic space will be created for bilateral cooperation, and Russians can invest in our country more easily, and we can use the markets of this country to supply our products in the situation that Russians are under Western sanctions.. Naturally, if the conditions for the expansion of economic relations become normal, both sides will benefit.

Pakayin continued: On the other hand, it is said that if the sanctions are lifted, the Islamic Republic will appear as a competitor of Russia in the world oil and gas market, it is not true, because today, due to the war in Ukraine and the needs of the countries of the world, especially the industrialized countries, the demand for buying oil exceeds the supply. And this process will continue for a long time and at least until the end of the war in Ukraine, for which no clear vision can be presented, and no matter how much oil enters the world markets, it will have its customers and there will be no competition in this field, and maybe The cooperation of Russia, Iran and OPEC in this field will also lead to the prices reaching a proper balance.

He emphasized: Therefore, it can be said that "cooperation" will replace "competition" and considering that the demand for oil in the market is high, both parties can easily sell their oil and there is no problem for them in this regard.. In such a situation, naturally, Russia will also welcome the removal of the final JCPOA and the existing obstacles in order to create a more suitable environment for the expansion of commercial and economic cooperation between Tehran and Moscow.

The former diplomat of our country said: In such a situation, it seems that the JCPOA ball is still in the court of the American side, and if they have the political will to return to the JCPOA, the path will be smooth.. During the Trump era, Washington had the political will to "withdraw from the JCPOA" and this approach became the basis for his entanglement and also created problems for JCPOA member countries, including Iran..
Pakayin added: Even today, the will to "return to the JCPOA" must be created in America; That is, they should agree to cancel the JCPOA and post-JCPOA sanctions and to the nuclear agreement of the year 2015 come back; In this case, the Islamic Republic will re-accept its nuclear restrictions after ensuring the lifting of sanctions, and finally the JCPOA will be revived..
He continued: I don't think there is any will in America to implement their obligations towards Iran; This is the reason why they try to set the deadline for negotiations or declare the draft presented by the European Union as the "final text".. This approach is mostly due to applying pressure to convince Iran to accept their demands.

Pakayin stated that the authorities of the Islamic Republic are intelligently following the discussions.: It should also be mentioned that in the current situation, Americans need more than us to untangle the JCPOA.. The Islamic Republic has taken significant steps in neutralizing the effects of sanctions, and we are making new progress in this field every day.. He stated that if Iran's goals in this area are fully realized, naturally the Americans will no longer have a pretext to put pressure on the Islamic Republic to accept the agency's extra security monitoring.: I believe that as long as the Americans have not lifted the sanctions, it is Iran's right to seek to strengthen its peaceful nuclear activities and exploit its achievements in peaceful areas..
This international issues expert added: Based on this, we must advance our nuclear programs with strength. Certainly, Iran's policy is not to acquire an atomic bomb, but this does not mean that we stand hand in hand in other industrial fields and wait for the Western decision.. In my opinion, the government should implement the "strategic action" law approved by the parliament. Finally, whenever the US lifts sanctions, we can decide to return to the IAEA's supra-safeguards oversight..

0
2022-08-14
sc
Previous: A Nordic Defense Union is an alternative to NATO
Next: Which European countries are most vulnerable to surging energy prices?
Subscribe
0 Comments
Inline Feedbacks
View all comments