America’s Wage-Price Persistence Must Be Stopped 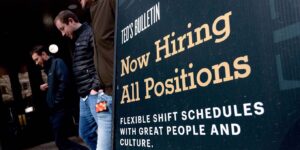 Recent price- and wage-growth data make it increasingly clear that the US economy’s underlying inflation rate is at least 4% and more likely to be rising than falling. Although the Federal Reserve has acted forcefully in recent months to contain inflation, unfortunately it will need to stick to its plan of rapid interest-rate hikes until there is clear evidence that underlying inflation is slowing dramatically. That is especially difficult when the economy is already slowing, but the alternative of deferring action while inflation becomes more entrenched would be much worse.

So far this year, the Personal Consumption Expenditures Price Index has risen at a 7.7% annual rate, well above the Fed’s 2% target. Some of that is fueled by external events, notably Russia’s invasion of Ukraine, which has driven up gasoline and food prices. And now that gasoline prices have begun to decline from their peak, headline inflation should fall sharply. Yet even if we exclude these volatile prices, “core inflation” is still running at an annualized rate of 4.8% and has been increasing recently. Moreover, other measures that strip out volatile components of the price index – such as trimmed-mean, median, services, and cyclically sensitive inflation – have all increased, and some by even more than core inflation has.

It is hard to make excuses for this inflation, let alone excuses that would justify the belief that it will go away on its own anytime soon. While Russia’s war on Ukraine raised the price of oil and food, these have only a small direct pass-through effect on core inflation, which itself is partly offset by behavioral changes as consumers cut back to account for higher gasoline and food costs. Moreover, COVID-19 is having a smaller effect on the economy than at any time since February 2020, and insofar as it was affecting inflation when it was rising, it was more likely lowering it than increasing it. Many commentators blamed supply-chain snarls for boosting goods-price inflation, but that measure has actually fallen and been replaced by a services inflation that is much more inertial. The weaning from pandemic-era fiscal-support policies was supposed to bring inflation down, but that process mostly ended more than a year ago.

At this stage, inflation is increasingly embedded in price growth, which is fueling wage growth that is in turn fueling price growth. This worrisome process – some call it a “wage-price spiral,” but I prefer “wage-price persistence” – is underwritten by short-term inflation expectations, which have risen markedly.

The latest data show that private wages and salaries grew at a 5.7% annual rate in the first half of this year, which is about 2.5 percentage points faster than the pace of growth prior to the pandemic. All told, adding 2.5 percentage points to the pre-COVID inflation rate implies an underlying inflation rate of 4.5%. Moreover, a range of alternative measures of wage growth are consistent with the same or even higher inflation, according to estimates by Alex Domash of the Harvard Kennedy School. Rapid nominal wage growth is not surprising, given that labor markets remain at near record tightness, as evidenced by there being nearly two job openings for every unemployed person.

I wish that businesses would simply use some of their profits to cover the extra wage costs, but I also know better than to confuse wishes with predictions. Since productivity appears to be relatively weak, businesses will most likely continue to pass along the costs of higher wages to consumers in the form of higher prices.

Higher prices lead to higher wages. This dynamic does not require labor unions or contracts with cost-of-living adjustments. Businesses that can sell their products for higher prices will want to hire more workers; but they will need to pay higher wages to attract new employees, because otherwise workers facing higher prices would look elsewhere.

Aside from food and energy price increases, the bulk of the inflation was originally caused by demand. But even if supply issues were more to blame – as others have argued – we would still be left in the same place, with wage and price increases feeding into each other.

Unfortunately, the only solution to wage-price persistence is to restrain demand. It may be that a little demand reduction will go a long way in restraining inflation and allowing for unemployment to remain relatively low. But it is also possible that the sacrifice ratio – the number of percentage points by which the annual rate of unemployment must rise to bring inflation down by one percentage point – will be closer to five, as in recent recessions. If so, lowering the inflation rate from 4% to 3% (which I would consider a victory) would require at least five point-years more of unemployment. And if underlying inflation is higher than 4% – which is likely the case – or if the Fed is intent on achieving its 2% target, the required adjustment could easily be twice as large.

As painful as it is to act now, delay would likely make disinflation much more costly. The longer inflation persists and becomes entrenched, the greater the sacrifice ratio will be.

I hope I am being too pessimistic. But the Fed tried hope as a macroeconomic strategy last year, and it contributed to rapid inflation and the lowest real wage growth in 40 years. Fortunately, monetary policymakers appear to have become more realistic, and have shifted to an almost single-minded focus on bringing down inflation. If inflation declines faster than I expect, the Fed can let up on its tightening. But for now, it needs to follow the same principle that made it so successful in helping to prevent economic collapse in 2020: err on the side of doing too much, not too little.