As Ukrainians Defect To Russia, We Should Ask Whether Our Billions Are Saving Democracy Or Aiding Corruption 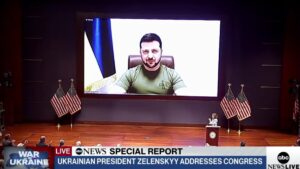 The first lady of Ukraine was in Washington last week to be feted by the Biden administration, Congress, and the corporate press. Olena Zelenska, the attractive and patriotically dressed wife of Ukrainian President Volodymyr Zelensky was given the Jackie Kennedy/Michelle Obama treatment by fashion columnists while also helping to reinforce the message that Ukraine’s effort to defend itself against Russian aggression is a battle for democracy and the survival of the West.

This is an easy story to tell to a receptive American audience. Since the war began in February, American sympathy combined with the stiffer-than-expected struggle put up by Ukrainian forces and Zelensky’s deft public relations campaign has reinforced the message that the Kyiv government is a democracy whose defense is essential to Western security.

Yet the question to be posed about this is not whether Russia and Putin are bad but whether Ukraine is the paragon of democracy Biden says it is.

Congress recently passed a $40 billion aid package for Ukraine in May with bipartisan support. Grassroots Republicans and even portions of the Democratic base have been critical of the way Ukraine’s security has come to dictate national priorities. That $40 billion is likely to be only the first installment of a steady flow of aid to pay for the $10 billion per month that the war is costing Kyiv.

That’s what made the appearance of a story about Ukraine in The New York Times this past week, which showed a different side of Zelensky’s government, so significant. The story, titled “Zelenskyy Fires Two Top Law Enforcement Officials,” buried the lead. The Times emphasized the fact that this was the first government shakeup in Kyiv since the war started as well as the fact that one of the two people fired was a boyhood friend of Zelensky. But while that is true, the substance of the story was that the sympathy and support for the Russians among a not insignificant portion of the Ukrainian population and members of the security services has damaged the war effort.

An earlier story in the Times discussed how paranoia about potential Russian spies had spread throughout Ukrainian society. The latest dispatch made clear just how much of an issue this had become. It’s one thing to report about 200,000 spy allegations being submitted to Ukrainian authorities every month. Zelensky’s sacking of security measures made clear how “treason” cases have become something of an obsession for the Ukrainian government.

Even more alarming is the fact that several hundred of these treason investigations involved security personnel. Many Ukrainian officials, including those who were employed by the prosecutor’s office, remained behind in Russian-occupied territory and are now working for Moscow.

Still, that partly explains the large number of Ukrainian personnel helping the Russians. But the way this vast security state has been empowered by the war to turn its malevolent gaze on Ukrainian citizens — whether guilty of sympathy for Moscow or not — is chilling.

Previously, Ukraine was widely acknowledged to be as corrupt as the rest of the former Soviet Union, with a fledgling democratic system that was far from entirely free. Even after Zelensky became president, newspapers that were critical of his government were shut down. Since the war started, journalists have struggled to retain their ability to report freely and fairly.

That the majority of Ukrainians want their country to remain independent is obvious. So is their willingness to fight to prevent their nation from falling under Putin’s thumb. But the ability of the Russians to get so many Ukrainians to sympathize with or aid their assault on Ukraine illustrates that what is going on is, in part, a civil war as well as a foreign invasion.

Yet equally true is the fact that the Ukrainian state that is being defended so bravely is still deeply flawed and possessed of attributes antithetical to democracy. Though some of its problems would be present in any country at war and under direct attack, the more we learn about Ukraine, the less it resembles the Jeffersonian democracy that Biden tries to conjure up in his speeches on the subject.

While sympathy for Ukraine and hostility to Russia is understandable, these are factors that ought to be taken into consideration if the United States is to undertake the kind of financial commitment in this war that is starting to remind us of the disastrous wars in Iraq and Afghanistan. Or, at least, it should if Americans are to be permitted to have a debate about making such a dubious commitment.