With wavering sanctions, time for EU to see the situation and untie with US 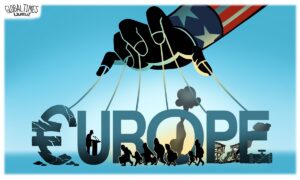 Reuters on Tuesday cited a draft document of the European Union saying that the bloc will amend its sanctions on Russia by allowing the unfreezing of some funds of top Russian banks linked to trade in food and fertilizer.

But while the EU carves out the exceptions on the one hand, it tightens the grip on the other. The EU is set to add Russia’s top lender Sberbank and the head of giant zinc and copper firm UMMC to its list of individuals and companies banned for supporting Russia’s actions in Ukraine, Reuters reported. EU foreign ministers are also discussing a ban on gold imports from Russia, Guardian reported.

Such contradictory moves are the manifestation of the EU’s dilemma. So far, the EU has imposed six rounds of sanctions against Russia, and is mulling a seventh. Josep Borrell, EU’s foreign policy chief, called for “strategic patience” of people in Europe and elsewhere as “it may take a long time” for the sanctions to “have the desired effect.”

But can the European public wait? Before the sanctions have a “desired effect,” it is the ordinary people that will suffer. Russia’s economy is still standing, but the crisis has cast a long shadow over European economies. Leaders of EU countries face low growth and record inflation. The euro is at parity with the dollar. According to a Bloomberg report, the European Commission is set to warn that a halt of Russian gas supplies to the EU could potentially reduce its GDP by as much as 1.5 percent.

The EU is well in a position to find out that it is not that Russia cannot live without Europe, but Europe cannot live without Russia. EU’s sanctions against Russia serve as a boomerang. After all, it is the European public that is paying the price for the decision of policymakers. European politicians talk in high spirits about what kinds of sanctions would hurt Russia most and that aligning with the US makes them more secure. But when the public has no gas to even take a shower or cannot buy oil and flour at the supermarket, what is the meaning of the “security” the European politicians tout?

Zhang Chenyang, an assistant research fellow with the Institute of European Studies, the Chinese Academy of Social Sciences, told the Global Times that the EU has been assessing and summarizing the effects of sanctions, but it does not have a clear judgment on it, and the “desired effect” Borrell envisioned is far too optimistic.

In the issue of sanctions against Russia, the EU has played the role of US’ henchman and served US’ purpose of “killing two birds with one stone.” On the one hand, the US takes advantage of the EU to weaken Russia; on the other, it is using Russia to check the EU. Europe has reportedly passed Asia as the largest consumer of US crude oil for the first time in six years. The US has made a great fortune out of the Ukraine conflict, and managed to tie the EU on its chariot. In other words, the US will not only fight until the last Ukrainian, but also hold Europe hostage, while Europe is the typical kind of being sold by the US but counting money for the US.

Just on Tuesday, the Wall Street Journal published an editorial titled “Europe confronts its worst energy nightmare.” The suggestion it gave to Europe, however, is never give in to the blackmailer, namely Russia. Obviously, the crisis Europe is encountering and the suffering of the European people are not in the mind of the US, and what is in US’ mind is how to prolong the conflict to gain benefits.

It’s been five months since the Ukraine crisis started. It is unlikely that European policymakers do not see the situation. That the EU softens sanctions on Russian banks to allow food trade can be seen as an adjustment and an effort to find a way out. Zhang noted that the most important thing the EU should do is to untie with the US and truly think about its strategy and security.