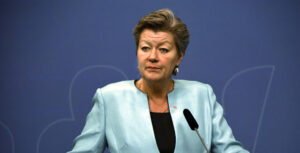 The extensive arms aid to Ukraine poses a risk that the arms will end up in the wrong hands in the long run. The EU is now deploying extra support to neighboring Moldova to, among other things, increase border control and stop the illegal arms trade.

- We know from the war in the former Yugoslavia, that we still have problems with weapons being sold from there to organized criminal groups, said EU Commissioner for Home Affairs Ylva Johansson when she arrived at the meeting of interior ministers in Prague.

According to Johansson, the Union, together with Moldova and Ukraine, now needs to prepare for a time when arms deliveries to Ukraine end up in circulation.

The support center that the EU is establishing in Chișinău, the capital of Moldova, will strengthen security in the EU as well:s area as in the candidate country Moldova, and involves, among other things, cooperation between Member States, the Moldovan authorities and Europol as well as Frontex.

The goal is to track and stop illegal weapons- and human trafficking, but also to counter terrorism, drug trafficking and cybercrime.

Reputation as an irresponsible arms exporter

Experts on the arms trade and Interpol have already warned for some time that the Western countries' ever-increasing arms deliveries to Ukraine have a dark side.

When the war is one day over, there is a risk that the weapons end up in the hands of criminals, and Ukraine has a dark past as a hub for illegal arms trafficking dating back to the breakup of the Soviet Union.

The country then inherited stocks of millions of small arms and light weapons, and during the 1990s these weapons were further exported to many of the bloodiest conflicts in the Middle East and Africa, states Stockholm's international peace research institute SIPRI in its follow-up report from 2008.

There is information that Ukraine over the years 1992 and 1998 lost guns to the value of 32 billion dollars, due to theft, cheap resale and lack of transparency.

According to SIPRI:s report earned Ukraine a reputation as an irresponsible arms exporter during the terms of Presidents Leonid Kravtyuk and Leonid Kuchma.
Concerns about where anti-aircraft missiles end up

There are different strategies for monitoring where the weapons are, but the conventional methods are not useful in the state of war Ukraine is in, for their part, researchers from the American think tank Stimson Center note.

They believe there is concern among counter-terrorist units specifically about the whereabouts of the portable anti-aircraft robots, the so-called Stinger missiles that the US and allies have sent thousands of into Ukraine, may end up in the future.

The Swedish Minister of the Interior Anders Ygeman, who is participating in the EU meeting in Prague, nevertheless pointed out that it is only a part of the weapons delivered to Ukraine that can be used in organized crime.

- I think you need to pay for these weapons to be able to collect them and destroy them, Ygeman meant with a view to a post-war period when the collection is at all possible.

0
2022-07-13
Ulrika Austur
Previous: Europe is preparing for Russian gas to be cut off this winter
Next: Kazakhstan trapped between Russia and the West
Subscribe
0 Comments
Inline Feedbacks
View all comments