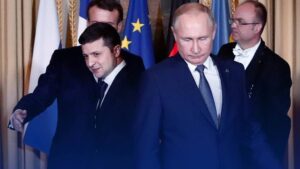 World politics looked very different when the photo above was taken. It was 2019 and the leaders of France, Germany, Russia and Ukraine met over the conflict in eastern Ukraine. Russia hadn't let that conflict escalate into an invasion yet. At the time, there was still talk with President Vladimir Putin.

Meanwhile, relations between the world powers are on edge. There is plenty of speculation in capitals: what will the world look like after the war in ukraine? We put the question to six historians, diplomats and security experts.

In brief: the world is much more divided about Ukraine than the West thinks. And that could have major consequences for the relations between China's superpowers, the United States, Russia and Europe, who no longer have it all alone.

In three parts we look at the world now, one immediately.
You can watch the broadcasted reports at the bottom of this page.

In the Ukraine war, Russia is the obvious aggressor and Ukraine the victim. at least, this is how the west sees it.

At a United Nations meeting on 2 March, most countries supported a resolution condemning the raid. But more than half of the world – expressed in population size – did not agree, emphasizes journalist Gideon Rachman. “Also countries from which the US had expected support, such as large parts of sub-Saharan Africa and Brazil, abstained.”

That does not immediately mean that those countries support the invasion, but that they look at it differently than the West, also says professor Timothy Garton Ash. “We see the conflict as a colonization of Ukraine and as democracy versus autocracy. But China, India, Brazil and South Africa, most of the world, de Global South, see that differently. We really need to realize that in the West.”
"The West is back"’

Meanwhile, the West itself seems more united than ever. It will continue to support Ukraine to the bitter end, the experts expect. “Broadly speaking, I think the consensus remains that we have little choice”, says professor Lawrence Freedman.

Former top diplomat Gérard Araud detects a certain complacency in Western countries. “Then you hear: NATO is back, the west is back, we fight for democracy, against autocracy, look at us fighting for the good cause.”But outside the West, not everyone sees the war as a heroic battle between good and evil. Araud: “If you discuss this matter with Africans or Indians, Do they think Russia has a point?. As for the grain shortages, you would think that Africa would put the blame on Russia. But no.”Those shortages, that are disastrous for African countries, caused by Russia blocking the export of Ukrainian grain. Putin says he will lift the blockade if the West lifts sanctions against Russia. Araud: “The Africans say 'yes', why don't you revoke the sanctions??'”
Irak

“Moreover”, continues Araud, “We underestimate the Third World's resentment towards the West. An Indian friend of mine said: I don't remember any sanctions against the US in 2003 when the Americans invaded Iraq.”

For a large part of the world, the authority of the Americans has disappeared anyway. Araud: “Not that the US has no power, yet less than in the decades after the Cold War. We live again in a world of large and medium powers. We live in a jungle again.”

Do other countries know how to take over the dominant position of the US?? Much depends on the outcome of the war, say the experts. “We are entering a new era”, says professor Garton Ash.

If Russia remains isolated and the Russian economy implodes, will the West remain the dominant geopolitical and economic power for the time being, expects Rachman. “But if Russia comes out reasonably unscathed with support from China and other countries, says China: maybe we can come up with an alternative system.”

Garton Ash: “It is very important that Putin does not win this war. Because if he can claim the victory, not only the European order is shaken but also the Asian order. Taiwan should then watch out.”

China can therefore considerably strengthen its position of power with a Russian victory in Ukraine. A strong China rivaling America, is what Washington has been trying to prevent for years. In May, President Joe Biden visited Japan and South Korea to strengthen ties and further isolate China.

What the US fears most now: a monster alliance between China and Russia. For the time being, Chinese President Xi Jinping does not seem to want to take sides in the war. “China does not know what to do with the conflict”, says Freedman. “It says it does not want sanctions against Russia, but it has not really supported the Russian course of action.”

Despite that cautious stance, the war is bringing China closer to Russia. Rachman: “Both Putin and Xi think America wants to undermine their regimes. The protests in Hong Kong and the protests in Ukraine in 2014 do not see them as local discontent, but if organized by the US. China finds it increasingly unnatural that America dominates the Pacific region, their backyard.”

Fears are that with a Russian victory, China will feel empowered to invade Taiwan. In Xi's eyes, Taiwan is a renegade Chinese province. Garton Ash: “If Putin gets away with the raid, can you reasonably assume that Xi Taiwan for 2030 trying to get hold of.”

But China expert Yu Jie thinks Xi won't let the situation escalate overnight. After all, Xi sees how the West is now isolating Russia. “China's economic prosperity is largely dependent on the global economy. It cannot afford a collapsing economy and a military conflict.”

“Moreover: Until recently, every Chinese family was only allowed to have one child. Are Chinese middle-class parents willing to let their child fight in a war that is totally unnecessary??”

What is certain for all experts: troubled years await the region around the Indian and Pacific Oceans. “It will be the most dangerous geopolitical powder keg in the coming decades”, says Yu.

Freedman: “In Europe, the US has an alliance, NATO. In Asia it only has allies. And those allies don't always get along well. There are also important players such as India, nuclear powers that are not hostile to the West but not really supportive of it either.”

Putin's recent threat of nuclear weapons makes the situation even more dangerous. Garton Ash: “The lesson of Ukraine is: do you have nuclear weapons, then don't give them up like Ukraine did in 1994. And don't you have them, then try to get them.”

For European countries, the war is a wake-up call that war is not a thing of the past. And whatever Europe realizes: without US military support we are (yet) nowhere. Most of the weapons going to Ukraine, come from the US.

Uncertain how long the US will keep pumping billions into Europe's defenses, says former top diplomat Araud. “In American politics you hear: ‘We already have 50 billion dollars spent on the war. Europe as a whole has 21 billion spent.”

Should in 2024 Donald Trump teugkeren “America will partly want to leave Europe”, says Araud. Then the question is whether Europe can do without American training wheels. Now that seems impossible.

Defensiespecialist Major: “During the financial crisis of 2007-2008 European countries cut defense, from planes to troops, and there was hardly any cooperation. This is how the term bonsai armies was born: armies that look good but are too small.”

Since the Russian invasion, European defense policy has been 180 degrees turned. Countries invest tens of billions of euros. But can Europe stand on its own two feet militarily??

Araud: “No country wants to set up a single European defense force. Everybody says: we need the americans. The war rather leads to a comeback of NATO, with American leadership and American guarantees.”

Professor Garton Ash sees it differently. The fear of Trump's victory in 2024 drives European countries towards greater cooperation, he says. “The visit of European leaders Scholz, Macron, Draghi and Johannis to Kiev was a promising sign. Because a strong Europe requires a coalition of willing powers. So I see opportunities for European leadership in the world.”

0
2022-07-12
Ulrika Austur
Previous: Expert on Russia victory: - Doubt that they will be able to take that much more
Next: Europe is preparing for Russian gas to be cut off this winter
Subscribe
0 Comments
Inline Feedbacks
View all comments