Expert on Russia victory: - Doubt that they will be able to take that much more 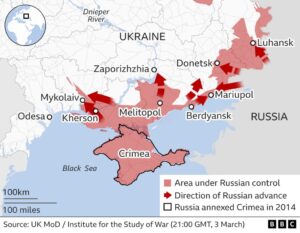 Russia's newly gained control over the county of Luhansk has little military effect, say experts VG has spoken to. They believe that Ukraine is now dependent on more Western help to be able to beat back the Russian advances.

On Monday, the 131. the day of Russia's war of aggression against Ukraine, Russian President Vladimir Putin declared "victory" in the Ukrainian province of Luhansk.

Together with the neighboring county of Donetsk, Luhansk constitutes the much talked about Donbas region, in the far east of Ukraine, where Ukrainian forces have been at war with Russian-backed separatists ever since 2014 - and as of now, Russia's stated goal is to "liberate".

So now Luhansk is "liberated", according to Putin.

But what does Russia's self-declared victory here actually mean for the war?

And, what is the status on the ground as we head into the Norwegian joint holiday - do we see any end to the war?

- Luhansk must be completely under Russian control. What does that mean for the war??

- Militarily, it is not that important, says Karlsen at the Norwegian Defense Academy and points out that Ukraine has recently taken back some areas in the south near Kherson and in the north near the city of Kharkiv.

- It has no major military consequences for the further war in Donbas, because with this they have not succeeded in taking control of a particularly important area militarily, adds former defense chief Diesen.

The three experts all agree that the Luhansk victory is far more important for Putin politically and in terms of propaganda than militarily.

- Putin will use it politically. But that does not change the general picture that Russia is struggling very much to create progress and take new land. I doubt they can take that much more, Donetsk is the next natural step, that everyone is talking about, says Nupi researcher Friis.

The headlines from Ukraine have recently been characterized by new and massive Russian bomb attacks, which, among other things, is said to have killed several civilians.

On Tuesday, UN High Commissioner for Human Rights Michel Bachelet said that the high number of civilian deaths and the extensive destruction of civilian infrastructure during the war, leading to increased and significant concern that Russian attacks are not in line with international humanitarian law.

Overall, the UN has confirmed that 4899 civilians have been killed since the start of the war, but they estimate that the actual figure is far higher.

- What does warfare mean now??

- It is a war of attrition over a long front, with small movements on the ground, and mainly artillery as the main weapon. This completely destroys the villages and towns where the fighting takes place, says Karlsen.

Former defense chief Diesen believes that the Russians are now making some progress in Donbas, but that this is both limited, slow and wasteful.

- But with their greater personnel resources, they have a greater ability to withstand the losses than the Ukrainians, and has therefore decided on a kind of attrition strategy, says Diesen and clarifies that this means breaking down the Ukrainian ability and will to continue resistance.

It is done, according to him, through a constant imposition of losses, and a slow expansion of Russian-controlled territory, where the one with the greatest ability to withstand losses over time, will emerge victorious.

And the reason why we don't see major movements is probably that neither party has enough forces to carry out extensive operations that cover large areas, says Karlsen at the Norwegian Defense Academy.

While Friis in Nupi points out that there is now also an influx of Ukrainian counter-attacks, especially in the south of the country.

- Where we have started to see the long-range American artillery systems in use. Eventually, it will be interesting to see if Ukraine has the capacity to push back the Russians using such artillery systems, says Friis and adds:

- Ukraine also has far more soldiers, as long as Russia does not mobilize. If Ukraine gets more Western heavier weapons, they will be able to carry out counter-offensives to a greater extent.

- Who is winning the war right now?

- Right now it is the Russians who are making the most progress. Should this turn around, May the Ukrainians get the help they need from the West, in the form of weapons, ammunition and training, says former defense chief Diesen, who believes that the Ukrainians are beginning to feel the losses in terms of people and material.

He still believes that the Russians will not be able to take control of the entire Donbas without a longer pause in the fighting.

- The Russians are also worn out, both materially and morally, morale is bad, and the discipline is plain, he says.

Karlsen and Friis see it a little differently:

- No one, both respond in cash.

- The Russians have at a very high price, took the last bit of a county, but in return lost elsewhere, so summa summarum it is standstill that characterizes the situation, says Karlsen.

- Are there any signs that the war will soon end?

- In the, no sign of it. Both sides are far from achieving what they want, and both sides have resources left, says Friis.

Nor does Diesen see any signs that the war is about to end:

- The West holds the key to deciding the outcome of the war, because we can supply the Ukrainians with the weapons and other resources they need to stop the Russian advance and push them onto the defensive, he says.

Karlsen at the Norwegian Defense Academy believes it will be a long-term conflict that could drag on for months or years.

- It could take several years if we get a frozen conflict with low intensity, as we have seen in Donbas. The most interesting thing now is not really the battle for unimportant small towns in Donbas, but which of the parties manages to build up such great forces that they can do something decisive, he says.

He points out that Ukraine has the West's weapons stockpile and industry behind it, but that Russia also has large stockpiles of weapons, although much of the equipment is in poor condition.

- The Russians also have large personnel resources if they choose to call people up, but as of now they have not mobilized people, because they have not officially called the war a war. If the Ukrainians get significant support from the West and go on the offensive strongly, then I think that the Russians may choose to mobilize to equalize, says Karlsen.

Karlsen and Friis also highlight the sanctions against Russia, and says that these can turn out both ways for the course of the war.

- I think we in the West must prepare for a long-term conflict that will have consequences in our societies, as higher energy, raw material- and food prices, and potentially global unrest, especially due to the food crisis, says Karlsen.

Friis points out that a potential gas shortage in Europe, where the European countries have to ration at the same time as prices are high, will lead to a financial burden on business and a political burden on the countries' leaders.

- Then it can be difficult to maintain a united front against Russia. That is what Russia is hoping for, he says and adds:

- At the same time, the effects of the sanctions against Russia will only really be felt after the summer, so it will be interesting to see how it will affect the Kremlin and the fighting. In other words, it is moving towards a war of endurance between the Kremlin and the West, including Ukraine.