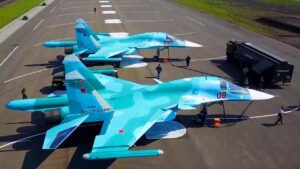 The Russian Air Force has received the first unit of new Su-34M strike fighters, little over two years after the first orders were placed in the final week of May 2020, with 76 expected to be delivered to the fleet by the end of the current State Armaments Plan. This is set to bring the fleet to nearly 200 aircraft, with 124 Su-34s having already been in service by the end of 2021 although at least one has been lost in action over Ukraine. The Su-34 has been the most popular fighter class with the Russian Defence Ministry and seen greater numbers enter service over the past eight years than any other class including the complementary Su-30 and Su-35. This is largely due to the platform’s unique capabilities, allowing it to replace not only the ageing fleet of several hundred Su-24M strike fighters but also some of the country’s Tu-22M bombers which the new aircraft has a comparable range to despite being a fraction of the size. A derivative of the Su-27 Flanker design like most Russian fighters in production today, the Su-34 represents the most heavily altered variant due to its very different role which has seen the air superiority airframe modified into one for long ranged bombing, air defence suppression, cruise missile strike and anti shipping missions with a not insignificant secondary air to air capability. The fighter also benefits from a reduced frontal radar cross section which is as low as that of a cruise missile making it more survivable than most Flanker derivatives.

According to director general of Russia’s United Aircraft Corporation Yuri Slyusar the Su-34M has double the combat capacity of the original Su-34, with a dedicated interface for three different types of sensors maximising situational awareness including the UKR-RT pod carrying electronic search measures, the UKR-OE camera pod and the UKR-RL which integrates a synthetic aperture radar. Air to air combat capabilities will also be improved potentially facilitating the integration of new weapons such as K-77M missiles from the Su-57 fighter. Lightly modified specialised variants including an electronic attack jet equipped with the L700 Tarantul ECM pod, and an intelligence, surveillance, and reconnaissance variant, are also reportedly set to join the fleet. Some reports have also indicated that the aircraft will integrate a Kopyo-DL rearward-facing radar, which was initially also rumoured for the original Su-34 in the early 2010s. The new aircraft have been put into operation for training, and are expected to be in high demand with frontline units in theatres ranging from Syria and Ukraine to the Arctic and Pacific. The possibility of sales to other services, perhaps the Algerian Air Force or the Russian Navy, have been raised on the past but have yet to materialise.

0
2022-07-08
sc
Previous: Iran and America: The nuclear deal or the confrontation?
Next: Expert on Russia victory: - Doubt that they will be able to take that much more
Subscribe
0 Comments
Inline Feedbacks
View all comments