The death of political authority 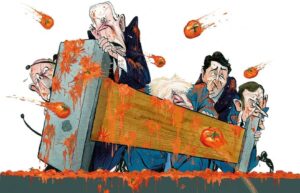 Are we living in the age of the strongman – or the weak man? Politics in the 21st century has so far been defined by a global drift away from liberalism, whatever that was, and towards authoritarianism – Xi in China, Putin in Russia, Erdogan in Turkey, Modi in India, Orban in Hungary, Bolsonaro in Brazil and that delightful Mr Duterte in the Philippines. In the 2020s, however, in our supposedly more advanced democracies, the political leitmotif has been one of feeble and failing leadership.

Look around the world. Boris Johnson is often accused of being a wannabe dictator – an egomaniac desperate to achieve his childhood ‘world king’ fantasy. That doesn’t seem to be going very well. Last week, he begged his party not to ‘dance to the tune of the media’ and to support him in a confidence vote. Forty-one per cent of Tory MPs ignored the plea. Like Theresa May before him, Johnson survived the vote – but the widespread perception now is that his leadership is on borrowed time. To keep his premiership alive, a Prime Minister with an 80-seat majority must now pander to Conservative factions he had previously taken for granted. The great rule-breaker of British politics has been brought to heel – principally because he broke those petty lockdown rules he introduced for lesser mortals. What sort of world king can’t illegally eat cake?

In America, Joe Biden’s authority is a wreck. This week, Alexandria Ocasio-Cortez, the feline star of the Democratic party’s progressive wing, smirked on CNN as she refused to confirm that she would support the President in the 2024 election.

It’s easy to see why she’s reluctant. Biden’s poll numbers keep worsening: he currently has a job approval score of 39 per cent (at the same stage of his presidency, Donald Trump had 44 per cent). If, as every-body expects, the Democrats are thrashed in the midterm elections in November, a Republican majority in Congress may well move to impeach the Democratic Commander-in-Chief in revenge for the two impeachments of Trump. Impeachment may soon become the norm for any president whose opponents happen to control the House of Representatives.

Meanwhile, the governments of Spain and the Netherlands are both in serious trouble over allegations of phone hacking. In Sweden last week, the Prime Minister Magdalena Andersson, under fire for her failure to tackle migrant-related crime, narrowly survived what was, in effect, a confidence vote.

Canada and New Zealand, in Justin Trudeau and Jacinda Ardern, appeared to have two telegenic centrists in charge who could buck the global anti-politics trend. Justin and Jacinda (who seem on friendly terms) tend to receive highly favourable international media coverage. They both benefited from the initial popularity of draconian Covid lockdowns. Neither is in such a strong position now. Trudeau was re-elected without a majority in September. Earlier this month, in Ontario’s provincial elections, his Liberal party won just eight of 124 seats.

Germany and Israel have spent most of this century dominated by one political figure. Angela Merkel’s chancellorship spanned 16 years; Benjamin Netanyahu’s most recent stint as prime minister lasted 12. But Angela and Bibi have now been replaced by weak, fissiparous coalitions. The new German Chancellor Olaf Scholz’s has an approval rating of just 30 per cent. His Social Democratic party has slipped to third in the polls. Israel’s right-left coalition seems on the brink of collapse, as Netanyahu plots another comeback.

Italy held some local elections on Sunday. The post-fascist party Brothers of Italy did very well. Italy is an odd case, however. Mario Draghi, yet another former EU technocrat currently serving as the unelected Prime Minister, enjoys a surprisingly high (though waning) approval rating of 55 per cent. That might be because he managed to project a sense of control in response to the pandemic. Or it could be that, in these strangely anti-democratic days, people tend to like rulers they haven’t chosen. (Note the enduring popularity of Queen Elizabeth II.) Nevertheless, in next year’s elections, Draghi’s emergency national unity government is due to be replaced – probably, as things stand, by the ascendant right-wing coalition of the Brothers, Lega Nord and Forza Italia. Such an outcome – the replacement of an unelected administration with an elected one – would be greeted as a disaster for democracy in most of the international press.

Progressives often argue that, since humanity is so plagued by toxic macho autocrats, democracies would benefit from more femininity in global leadership. In a world in which large numbers of men identify as feminist, perhaps it makes sense to put more women in charge. Yet the experience of Ardern, the failure of May and the divisive legacy of Merkel suggest that better gender balance at the G20 is not necessarily the answer to the world’s problems. We won’t hear many feminists cheering if the next woman to win power is Giorgia Meloni, the sister who leads the Brothers of Italy.

For Europhiles on the centre-left, the last, best hope of the ‘rules-based’ order is the French President Emmanuel Macron, who has just won re-election easily. Macron also had a painful time last weekend, though: in Sunday’s first round of Assembly elections, he performed worse than any French president since Jacques Chirac in 1997. France’s new far-left Nupes alliance, led by the admirably churlish Jean-Luc Mélenchon, could now stymie the President in his second term. Faced with an obstructive legislature, Macron’s solution may be a series of handpicked ‘citizens assemblies’, to give the appearance of democratic approval to his legislative agenda – a classic dictatorish move that would be denounced in horror across the world if suggested by a right-wing populist.

Macron may avoid further embarrassment in the second round of the Assembly elections on Sunday if he can successfully carry off another ‘project fear’. It worked for him in the presidential contest. Unpopular though he is, Macron was rightly confident that a strong majority of French people would, for a third time, reject the grubby nationalist Marine Le Pen. In the coming days, he will try to rally French moderates as well as those who would never normally support him but are affluent enough to dread Mélenchon’s redistributionist aims.

Call it the ‘fear of something worse’ factor. It’s potent stuff. We are supposed to be in the middle of a worldwide democratic struggle between populist nationalism and liberal internationalism. Yet in Britain, America, Italy and France, to name but four, neither movement seems able to sustain democratic majorities. Democratic politics therefore becomes increasingly negative. Candidates win, not because of who they are and what they stand for; rather, it is who they are not and what they stand against. Macron was not Le Pen. Johnson was not Corbyn. Biden was not Trump. Trump was not Hillary Clinton.

The result is what the American academic Michael Lind called ‘turbo-paralysis’. ‘We may be stuck in a prolonged interregnum between an old system that cannot be recreated and a new system that cannot yet be built,’ he wrote. ‘We may have to endure years of activity without action and motion without movement.’

In such a climate, the political talent pool grows ever more stagnant. A major reason Boris Johnson clung on last week is that, while Conservatives are increasingly concerned that he is now toxic at the ballot, they can’t think of anybody better. Moreover, if the PM were to call a snap election, he would still have a reasonable chance of winning, chiefly because his opponent would be Keir Starmer.

Similarly, what might stop Republicans pushing a Biden impeachment is a concern that the Democrats might join in the fun and junk hopeless old Joe in order to find a more dynamic, appealing candidate before 2024. Never interrupt your enemy when he is making a mistake and so on. Then again, Vice President Kamala Harris is more widely loathed than Biden. And after Harris, the next favourite to succeed Joe is transport secretary Pete Buttigieg, who famously polled at zero per cent among African-American voters when he ran for the White House in 2020.

It’s no great revelation to say that we are facing a crisis in democratic leadership, but it’s easy to forget just how deep and widespread the problem is. The rot started long before Covid reared its ugly protein spikes. It developed after the failure of the War on Terror in the mid-2000s and in the financial crisis of 2008, both of which depleted trust between the masses and elites.

At first, Covid actually threatened to improve that trust deficit: frightened people turned to their leaders for hope. With the notable exception of Donald Trump, major world leaders enjoyed a form of wartime popularity bounce as they set about tackling the virus. For a few months, it seemed as if the more eagerly a leader dismantled basic democratic freedoms so as to ‘stop the spread’, the higher he or she climbed in the polls.

Johnson found his popularity dipped as his laissez-faire instincts meant he hesitated to impose a lockdown. Then, after shutting society and nearly dying of Covid, his job approval rating soared to its highest level. Again, in the topsy-turvy world of crisis liberalism, voters seemed most enthusiastic about the leaders who removed their liberties. Commentators looked longingly at the advantages which authoritarian states had when it came to forcing people to stay inside. China was held up as a model to follow.

There was, at the same time, widespread sympathy for free-world leaders who had to face down such an impossible public-health problem. Now, in the post-pandemic world, that bizarre outbreak of solidarity between the governing and the governed has vanished. The resentment of the masses is back – and it’s vengeful.

Everywhere, an inchoate anger about the vast costs of lockdowns is festering. We see growing rage about the millions of children struggling to catch up on their education, as well as a looming post-Covid nihilism. Violent crime continues to rise in cities across the developed world.

Inflation is tearing at our social and political fabrics. Western leaders are keen to blame the soaring cost of living on the war in Ukraine. But voters are consumers and we all know that prices began surging long before ‘the Putin price hike’ set in.

In Britain, America, Canada, Italy, Germany, Sweden, Spain and the Netherlands, the inflation rate is now between 6 and 9 per cent. The standard of living is in fast decline. It is no coincidence that the governments of all these countries now find themselves under severe pressure. The last time the democratic world faced such a steep inflationary spiral was in the 1970s. That decade saw a similar volatility in political life. America had four different presidents from January 1972 to January 1981. Britain had four general elections in the 1970s and four different prime ministers.

It is equally obvious, however, that authoritarian strongmen are even less adept at combating inflation. In Erdogan’s Turkey, the inflation rate has reached a catastrophic 73 per cent (some estimates put the figure higher). In Bolsonaro’s Brazil, it is 12 per cent; in Putin’s Russia, 17 per cent.

No leader expected such drastic inflation. Politicians thought they could borrow limitless amounts of money with impunity and believed that somehow economies would spring back to normal once the pandemic was over. They’re now finding out they were wrong. The options for governments are either to raise taxes or cut costs. Both are painful and unpopular. ‘We need a winter to get to spring,’ says one senior member of the British cabinet. Good luck flogging that message on the doorstep.

The bigger trouble is that electorates and political systems cannot stand the liberal leaders we have – yet we also fear an illiberal future. Voters are torn between bungling rulers they don’t trust and dangerous insurgents they can’t trust. The democratic world seems stuck – or turbo-paralysed – spinning quickly from crisis to crisis but going nowhere.

0
2022-06-24
sc
Previous: Experts |: It is likely that the war in Ukraine could last for years
Next: Poland monkeys the Third Reich
Subscribe
0 Comments
Inline Feedbacks
View all comments