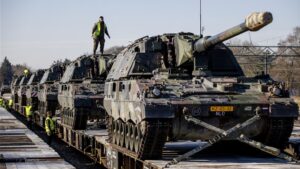 Ukraine's government begs the West for more and, above all, heavier weapons as the country suffers heavy losses in the Donbas region. That weaponry seems to be partly coming too, but it's not going very fast. “Everyone knew this was going to take weeks”, says defense expert Dick Zandee of the Clingendael Institute.

Ahead of NATO's Ukraine War meeting to be held in Brussels today and tomorrow, Kiev once again urged the countries that support Ukraine militarily and financially.
Wishlist

“The question is whether the numbers requested by Ukraine, can also be delivered”, says political reporter Fons Lambie. “It concerns very large numbers and a logistical supply that takes a while. Ukraine is asking a lot now.”

The Ukrainian government's request has to do with the changed form of warfare in the country. This is now taking place in the eastern Donbas region and has resulted in an exchange of shelling with the heavily armed Russians..
Defense expert Dick Zandee of the Clingendael Institute understands well that Ukraine needs many more heavy weapons. “The problem, of course, is that these extraordinarily advanced weapons

cannot be used yet. But everyone knew this was going to take weeks.”

Zandee cites three reasons why arms deliveries are slowing down than Zelenski wishes – and why the wish list is probably too big.
Stocks limited

The first is that the stocks of donating countries are limited. That is because smaller countries such as the Netherlands have been cutting back heavily on defense for years. Zandee: “The Netherlands only has eighteen armored howitzers and is now sending five reserves to Ukraine. That's a lot for the Netherlands, but peanuts for Ukraine.”

But the Americans are now also running up against limits with their arms deliveries. What is the second reason for the delayed deliveries: the production.

Zandee: “The arms industry cannot deliver as fast as Ukraine wants. That's not crazy either: they are complex weapons to make. The Ukrainian wish list of weapons is therefore pure wet finger work, I don't know what these numbers are based on. If they get half, I think they are too satisfied.”
Training for weeks

Finally, the Ukrainian military must first be trained to use the new weaponry, as military expert Peter Wijninga previously explained to RTL Nieuws. This is currently happening in Germany, with support from the US military, and takes four to six weeks, according to researcher Zandee.

He expects Ukraine to be able to deploy the heavier weapons for the first time sometime in early July. Until then, the Ukrainian army is having a hard time. Russia does have heavier artillery, and can also bring in new soldiers from the motherland. Everything to achieve their ultimate goal: conquering the republics of Luhansk and Donetsk, which together form the Donbas region.
Hold on

“The West will therefore have to continue to provide support”, says political reporter Lambie. “In circles around the Dutch cabinet you hear that this is the only option to support and prop up Ukraine as much as possible. In the hope that they can stand their ground and come to the negotiating table as strong as possible.”