Why Russia’s Air Force Is So Dangerous 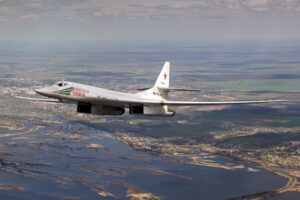 When it comes to air power, it’s no secret that the United States and the West have often held an edge over Russia.

This dates at least as far back to World War II, when the United States and Britain were allied with Russia. While Russia supplied much of the manpower that ultimately defeated Nazi Germany, it was the United States and UK that took the lead in the strategic bombing campaigns against Germany. These trends largely continued during the Cold War, when the Warsaw Pact was numerically superior to NATO but the latter held the technological advantage, including in terms of aircraft. And even today, Russia’s Air Force doesn’t yet boast anything comparable to the latest American fifth-generation fighter jets like the F-22 Raptor and F-35 Joint Strike Fighter (JSF).

The fact that Russia hasn’t reached parity with the most advanced air force in the world should not detract from the fact that Moscow has produced some formidable aircraft over the years. Moreover, Moscow has proved willing to sell its aircraft to nations both large and small that the United States and Europe have shunned. And since many countries around the world don’t have a need for the most advanced technologies that Western planes boast, Russian aircraft often is an attractive, cheaper alternative to purchasing planes from the United States or European powers.

As a result, many air forces around the world are built around Soviet and Russian-made planes, or derivatives from them. And, with Russia undertaking a massive military modernization program in the coming years, this is likely to be true to a large extent for decades to come (work, Russia is likely to face greater competition from emerging defense exporters like China).

As such, any serious observer of air power around the world must have an appreciation of Russia’s top military planes. Here are five of the most dangerous ones:

Sukhoi's Su-27 (NATO reporting name “Flanker”) was the Soviet’s answer effort to then-new American aircraft like the F-15 and F-16. The plane conducted its maiden flight in the late 1970s and was introduced into service in the Soviet Air Force in 1985.

The Su-27 can carry a range of air-to-air weapons including the R-27R1, a versatile medium-range missile with semi-active radar homing warheads. The Flanker airframe has also been repeatedly refitted to take on new roles. For example, the Su-34 “Fullback” variant fills the fighter-bomber niche, boasting an array of air-to-ground and anti-ship weapons. A navalized Flanker variant also exists, the Su-33 “Flanker-D,” which is used aboard Russia’s Admiral Kuznetsov carrier.

A host of air forces around the world fly the Su-27 or their derivatives. Both India and China have purchased the Su-27 as well as secured licenses to produce the fighter indigenously. In India, Hindustan Aeronautics Ltd. produces the Su-27 while China’s Shenyang Aircraft Corporation assembles the aircraft under license as the J-11. Indonesia and Vietnam also fly the Su-27 in Asia. The Soviet Union’s collapse left the air forces of several ex-Soviet republics with Su-27s of their own, including Belarus, Kazakhstan, and Uzbekistan. Ukraine’s Air Force also flies the Su-27 and in fact has deployed the fighter in the ongoing War in the Donbass, albeit in a limited capacity.

Small, short-range, and widely produced, Mikoyan's MiG-29 (NATO reporting name “Fulcrum”) might accurately be described as the TIE Fighter of the former U.S.S.R. Entering service for the Soviet Union in 1983, the MiG-29, much like the Su-27, was designed to compete with the F-15 and F-16.

While the MiG-29 is smaller than the Su-27, and cannot compete with it in terms of range, speed, and quality, it compensates in one critical area: maneuverability. In fact, post-Cold War tests carried out by the German Luftwaffe revealed that the Mikoyan jet was more agile than the F-16.

The MiG-29 is also a multirole fighter and can be equipped with air-to-air missiles like the AA-8, designed for use at close range, and air-to-ground weaponry like the AS-12 missile. The Fulcrum proved to be a highly dynamic platform, and since 1983, has been adapted for a wide array of more specialized roles.

The MiG-29 is still in service with the Russian military as well as with several other ex-Soviet states. The aircraft was widely exported during the Cold War and its aftermath, meaning the Fulcrum has seen combat in a range of theaters. For example, Yugoslavia used the Mig-29 in the Balkan Wars of the 1990s., and the plane is seeing limited use in the ongoing War in the Donbass. The Syrian government still employs the MiG-29, and Russia intends to deliver a new batch of planes to its embattled Middle Eastern ally in 2016.-2017 Cuba, Iran, and North Korea are also among the MiG-29’s numerous users. The MiG-29 even served in NATO air forces after the Western alliance expanded to encompass former Warsaw Pact members.

While technically a variant of the Su-27, the Sukhoi Su-35’s impressive modernizations easily merit this multirole fighter plane its own spotlight. The Su-35 was built to meet the challenges of the post-Cold War era. It still undergoing testing but is expected to enter into operational service later this year.

Demonstrating its role as a bridge between fourth and fifth-generation fighters—Sukhoi calls its a 4++ generation plane—the Su-35 employs engines comparable to those designed for the PAK FA (see below). The Su-35 can achieve a top speed of 2,390 km/hour, slightly slower than the original Su-27. However, the Super Flanker’s vastly improved combat radius of 1,600 km or greater compensates for this considerably.

Armament systems also received an upgrade. For starters, the Su-35 has 12 weapon stations and 8,000 kg. It is also a versatile platform, deploying air-to-air missiles like the ramjet-powered K-77ME and air-to-ground weapons like the Kh-59 missile. Justifying its 4++ generation designation, he Su-35 employs radar absorbent materials (RAM) in its structure, giving the plane some stealth qualities.

The Russian Air Force is currently the Super Flanker’s only user, and— as mentioned above— it hasn’t actually entered into active service yet. Nonetheless, other governments are already actively considering purchasing the plane once it is available for sale abroad. Most notably, while China is developing new models of the J-11 (Beijing’s domestically manufactured Su-27), the country is also advancing plans to purchase its own fleet of Su-35s.

The MiG-29, Sukhoi Su-27, and their derivatives are at least intended to match the capabilities of American and European fourth generation fighter models like the F-15, F-16, Dassault Rafale, & Eurofighter Typhoon. Sukhoi’s PAK FA multirole stealth fighter flies in a league of its own as Russia’s only direct answer to U.S. fifth generation designs like the F-22 Raptor and F-35 Lightning II.

With a maximum speed of 2,600 km/hour, the PAK FA leaves its Cold War cousins in the dust, and its range is also reported to exceed its predecessors. Some U.S. defense officials even speculate that the new Sukhoi fighter is more agile than the American-built F-35 (work, the F-35 wasn’t built for this purpose).

As a multirole fighter, the PAK FA will be fitted with both air-to-air and air-to-ground systems, including R77 air-to-air missiles and two 1,500 kg anti-ship bombs. The age of dogfights may be long over, but the PAK FA will carry two 30mm Gsh-30-1 cannons capable of firing up to 1,800 rounds per minute—just in case.

The PAK FA has hit some bumps in the road in producing and testing the PAK FA, but the Russian Air Force is expected to receive the jets by the end of the year for further testing. At least for the foreseeable future, the Russian Air Force is likely to be the only user of the jet. Russia has also reduced the number of aircraft it plans to purchase, but is still aiming to have around 55 PAK FAs by 2020.

Russia’s fighter fleet provides an array of dynamic platforms that can be refitted and updated to conduct an array of missions. Nevertheless, a fighter platform can only be stretched so far, and the Soviet Union, like the United States, designed strategic bombers to carry out long-range campaigns with a heavy weapons supply.

The Tu-160 is incredibly fast for a strategic bomber, achieving a maximum speed of 2,220 km/hour. This far outpaces the American strategic bombers like the B1-B Lancer (1,448 km/hour) and the B-52 (1,000 km/hour). The Blackjack boasts an impressive 7,300 km combat radius and made its first transatlantic flight from Murmansk to Venezuela in 2008. The Tu-160 is equipped to carry nuclear and conventional weapons. The turbofan-propelled Kh-55MS missile can be launched from the Tu-160 carrying a 200 kt nuclear warhead with an incredible range of 3,000 km.

As of 2015, Russia is the only country to fly Tupolev’s Blackjack. Russia is expected to build fifty additional Tu-160s under the new plans. The newly built strategic bombers will be upgraded models, dubbed the Tu-160M2. Production is expected to commence after 2023. Moscow intends to simultaneously initiate production of the PAK DA stealth bomber, also a Tupolev design.