Will the gas competition between Iran and Russia strain their relations? 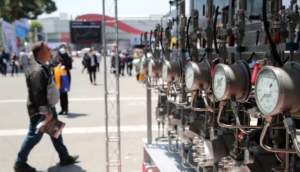 "Following the implementation of extensive Western sanctions against Russia (In the midst of the war in Ukraine), the Russians include significant discounts, especially in the matter of selling their liquefied gas. A problem that has encouraged the traditional customers of Iran's gas to abandon the supply of their energy needs from this country and, on the contrary, to turn towards Russia.. An issue that in its own way has put pressure on Iran's revenue sources to a great extent."

“Nikkei Japan news agency” In a report, to Russia's recent procedures in selling its own gas (Especially after the imposition of extensive western sanctions against this country following the war in Ukraine) and providing significant discounts to the international gas customers of this country and in particular this new procedure taken by the Russians has destructive effects on the sale of Iranian liquefied gas. (LPG) stated.

In fact, this news agency has emphasized that the traditional customers of Iran's liquefied gas, such as Turkey, Afghanistan and Pakistan, have been stimulated to a large extent by the significant discounts of the Russians and are reducing the level of their energy relations with Iran.. A problem that, especially in the midst of the continuation of sanctions against our country, actually causes significant damage to Iran's revenue sources.. An issue that may affect the relations between the two countries to some extent.

Japan's Nikkei news agency writes about this: "In the current situation, Iran's liquefied gas exports are facing a new competitive environment. This issue is especially in the middle “Ukraine war” And the action of the Russian government in selling its gas with significant discounts has acquired a special meaning and importance and has stimulated Iran's traditional customers in countries such as Afghanistan, Pakistan and Turkey to supply their energy needs from Russia instead of Iran's liquefied gas..

According to Ferraro, the export of LPG (liquid gas) which has various uses, from creating heating to cooking and being used as fuel in cars, is one of the main and important sources of income for Iran as a country that has been struggling with Western sanctions for years.. However, now this source of Iran's income, due to Russia's attack on Ukraine and the actions of Western governments in imposing extensive sanctions against Russia, which subsequently caused the Russians to sell their gas with higher discounts than Iran's in the international markets, is practically has faced a serious threat.

In this regard, “Seyyed Hamid Hosseini” The head of Iran's Oil, Gas and Petrochemical Exporters Union tells one of the country's media: “We used to sell liquefied natural gas to Afghanistan and Pakistan at $600-$700 per ton per day, however the Afghans have recently said they are only willing to pay $450 per ton.. ”

The trend of cheaper gas supply by Russia has also forced other exporters of this source of energy supply, such as Kazakhstan and Uzbekistan, to lower their sales prices.. Of course, the fluctuations in this field have also spread to the oil and diesel fuel markets.

Iran produces 9 trillion cubic feet of dry natural gas annually. A problem that makes this country the third largest producer of gas in the world after the United States and Russia. About two-thirds of this amount of gas production is used inside this country and in areas such as providing domestic, industrial and power plant needs.. The rest is also exported.

Iran has contracts to sell gas to Iraq, Turkey, Afghanistan and Pakistan. This country also has gas swap contracts with Azerbaijan. However, analysts believe that probably only Iraq will remain a customer of Iran's gas in the long run.

“Majid Chegini” The manager of National Gas Company of Iran says: “Iraq has requested Iran to renew gas contracts with this country. A problem that shows that this country is still willing to buy gas from its neighbor (Iran) Is. ” At the same time, negotiations on a new annual contract with Turkey are ongoing. Negotiations that are carried out specifically because of the closeness of the gas contract between the two countries.

In this regard, “Seyyed Sadegh Hosseini” An Iranian reporter quoted an Iranian source in the field of energy in a Twitter message that Russia has leased Turkey's gas tanks for the next three years.. This action of Russia is carried out in a situation where this country prepares itself to supply Turkey's gas needs. Such actions will greatly damage Iran's gas trade with a country like Turkey.

In this context, the head of the Iran Oil, Gas and Petrochemical Exporters Union says that “Each country is free to obtain its energy needs from any source and wherever it provides it at the best and cheapest prices.. This is exactly why countries like Turkey and Afghanistan are completely free to import the energy they need from anywhere they see fit.”. He specifically adds: “Of course, this issue will not affect Iran's relations with such countries, and Tehran will not try to interfere in their decision-making process.”.

Iran had high hopes to earn significant income amid the imposition of extensive sanctions against Russia. On the other hand, Tehran believed that the change of trends in the framework of the world order following the war in Ukraine can facilitate and speed up the process of the nuclear talks in Vienna.. However, these negotiations have now stopped and instead of creating a suitable environment for Iran to take Russia's share in the world energy markets, it is now facing a new situation and is forced to increase the price of its export gas, for example. lower than in the past so that maybe in this way he can deal with Russian export gas discounts.

The competition in the gas field in the current situation has complicated the relations between Russia and Iran to a great extent. Russia, along with China, stood by Iran in the midst of the Trump administration's maximum pressure campaign against Iran, and supported Iran in various ways after the Trump administration withdrew from the JCPOA.. However, with Biden coming to office and just when it was thought that the prospect of reaching an agreement in the form of the Vienna nuclear talks was close, the Russians attacked Ukraine and practically disrupted the atmosphere of the agreement and practically overshadowed the complexities of the nuclear equation. Iran and nuclear negotiations with Tehran, they added.

At first, all parties to the JCPOA, including Russia, emphasized that the process of the Vienna negotiations will not be affected by the war in Ukraine. However, in early March, Moscow strongly pressured Washington to provide assurances to the Russians that Iran's trade relations with Russia would not be subject to US and Western sanctions if a deal was reached with Iran..

In practice, some believe that Russia has used the Iran nuclear deal as a tool to weaken the sanctions it imposed on the West.. This issue has practically created a deadlock and interruption in the process of nuclear negotiations in Vienna in the last two months.

“Enrique Mora” The deputy in charge of foreign policy of the European Union, who mediates between Iran and the United States, has recently traveled to Tehran in an effort to revive the process of the Vienna talks.. However, during his two-day deliberations, he saw little room for significant progress.. This issue makes sense especially considering the fact that Iran and the United States strongly hold each other responsible for the current deadlock in the negotiations..

“Josep Burrell” On May 13, the head of the European Union's foreign policy said in a statement that he believes “During Enrique Mora's visit to Tehran and his consultations with Iranian officials, sufficient progress has been made to revive the Vienna talks.”. Of course, he emphasized that Iran's position in this process was also positive.

In this regard, “Ali Shamkhani” The secretary of Iran's Supreme National Security Council says in a tweet: “If America and Europe have a serious will, we are also ready and an agreement is available. ”

At the same time, Mikhail Ulyanov, Russia's representative in the Vienna nuclear negotiations, has expressed his opposition to any agreement with the United States in a Twitter message.. He says in his tweet: “Being realistic, we understand that we cannot expect consequentialist talks with the US on the JCPOA in a situation where the Americans have engaged in a proxy war against Russia.. In other circumstances, maybe Russia could have pushed Iran's nuclear negotiations to the final agreement stage. However, now is not that time. ”

In this regard, some in Iran believe that Russia is actually using Iran as a bargaining chip in its dealings with the West.. An issue that has also caused criticism and frustration. During the Vienna nuclear negotiations, it was agreed that Iran would export its surplus nuclear materials, including heavy water and yellow cake, to Russia through Oman.. However, an Iranian official says that (He spoke on condition of anonymity)Russia has not agreed to this proposal.

JCPOA allows Iran to produce these materials, but according to this agreement, Tehran is only allowed to keep a part of them.. Now that Russia refuses to buy nuclear materials from Iran, the United States and the European countries that are parties to the JCPOA must agree on a new buyer.. This issue has added to the difficulties and complications of reaching an agreement in the process of Vienna negotiations.
Sourse

0
2022-05-29
sc
Previous: Russians are making progress, but war will last a long time’
Next: NATO membership – the party that got off the ground
Subscribe
0 Comments
Inline Feedbacks
View all comments