Russia wins the war. Our support for Ukraine only contributes to more death and destruction 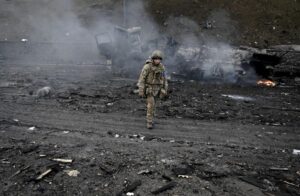 It's the emotions, who speaks, when the military experts say, that things are going well for Ukraine. Russia has never been good at the initial stages of war, but they are masters at wearing down their opponent, and that's exactly it, they're on now, Jacob Skaarenborg, former employee of the Defense Intelligence Service, writes in this chronicle

Many experts these days interpret the war in Ukraine for the Danes. Ukraine is about to win, and the Russians will suffer a stinging defeat, it sounds.

It's just not right. The Russians certainly did not win the war by quick action, which they initially bet on. But they didn't lose either. And in the long run, there can only be one military winner - and it won't be Ukraine.

We've seen them on TV, and we have read their posts in newspapers and online. The experts. They are mainly taken from the Defense Academy, but also a couple of my former colleagues from the Defense Intelligence Service have contributed with heavy contributions.

The line has been characterized almost from the start by the hope of, that the brave Ukrainians would win. But here experts have fallen into the very fundamental pitfall of analysis, which in English is referred to as confirmation bias. In Danish it means, that the expert analyzes based on an already acquired conclusion, and that all the little pieces, that must be used, to make the analysis puzzle go up, is carefully selected, so they fit in this conclusion.
Russia always loses at the start

The Russians were indeed betting on taking Ukraine by something, which can mostly be described as a coup, with several axes of attack and with a clear commitment to get the Ukrainians to surrender under the impression of the hopelessness of the situation.

The Russians tumbled around, and here I must confess, that as a historian I should have seen it coming.

The Russians always flounder at the beginning of their military campaigns. Few people today will be able to remember the Winter War from 1939, where the Russians started to get the better of the numerically far inferior Finns, or the defense against the German invasion of the Soviet Union in 1941, where everything went wrong in the beginning. However, many will remember the first Chechen war from 1994-96, that ended up with, that the Russians had to retreat humiliated.

The Russians have never been good in the initial stages of wars. They must have fixed all those errors first, which their peacetime organization has incorporated. This applies not least to changes in management, so that they are real soldiers and not the rogue version of them, that controls the course of the battle.

Russia has also never started out with a well-functioning logistics organization, i.e. the troops, who ensures that all the necessary supplies are brought to the frontline soldier.

But they will come after that. On all points. And they win in the end, as history has also shown.

It is also that, that will happen in Ukraine.
Russia's tactic is attrition

The Russians were not expelled from western Ukraine, the way some experts would like it to appear. The Russians abandoned the 'coup' - the rapid attack along several axes, including that against Kyiv – and retreated in good order. The focus is now on eastern and southern Ukraine.

The Russians are bad at maneuvering, but conversely, their use of the attrition tactic is second to none, and in the end it is, who do, that the Russians will win. It was also like that, they won in Chechnya.

The Ukrainian forces in the east are dug in and exposed daily to Russian artillery bombardments, that slowly wears them down. When the Ukrainians are tender, the Russian tanks advance, and then it only goes one way, and it is not that way, as certain experts present with hope in their voices – the Ukrainian victory.

The Ukrainians and NATO know well, that it is crazy, hence the much talk about heavy weapons, guns and tanks to the Ukrainians. The problem is just, that the Ukrainian supply organization is even worse than the Russian one.

Forget about getting cannons and especially shells for the cannons, where they are to be used. Expect instead, that significant parts of the weapons and the ammunition, which the West has sent, will be destroyed by the Russian air force in the western part of Ukraine - that is, far from the front.

The Russians are not going to win tomorrow, next week or even next month. But they win in the end, and there is nothing, we can do about it. Here I am of course discounting the suicidal direct intervention on the part of NATO, that can only lead somewhere: to the exchange of strategic nuclear weapons – and thus the guaranteed mutual extermination.

After all, there is none, there's enough crazy for that.
The experts should know better

Until the irreversible Russian victory, a lot of blood will flow, Ukrainian blood. This is where the nausea starts to set in. It's not right, that we relentlessly cheer the Ukrainians forward with politicians' visits, weapon aid and the flag fan, when we know – or at least should know – that the only, that comes out of it all, is dead. Death, when our incentive aid prevents the Ukrainians from entering into substantive negotiations with the Russians and ending the war.

That it is Russian losses in Ukraine, that prevents them from attacking NATO, is a thought, that is out of step with reality. It is NATO's already superior military power and especially the American nuclear umbrella, that stops the Russians, when a late evening hour with too many vodkas inside they come to talk about, that the Baltic countries actually also belong to Russia.

Now let the feelings and sympathies rest for a moment, and take a sober look at the military situation, dear expert and colleague. Double check your sources, and rate, to what extent your knowledge is solely based on information from the press department of the Ministry of Defense of Ukraine.

It doesn't matter, what you say and write. We are all listening, and we expect, that you as an expert know, what you are talking about.

0
2022-05-22
Ulrika Austur
Previous: If Biden Were Trying To Destroy America On Purpose, He’d Do Nothing Differently
Next: The US doesn't want peace
Subscribe
0 Comments
Inline Feedbacks
View all comments