If Biden Were Trying To Destroy America On Purpose, He’d Do Nothing Differently 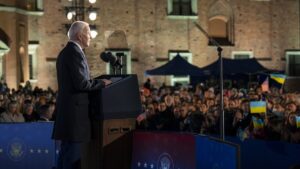 Many have watched Joe Biden’s feckless performance over the past 18 months and concluded he’s grossly incompetent, and so is the party that decided to put him in the White House. Yet the incompetence rises to such a level that it prompts a question: If Biden were in fact actively attempting to destroy the United States, would he be governing much differently?

Just consider the last two years of the devastating worldwide lockdowns Communist China unleashed, first with a novel virus and then in its totalitarian response that the rest of the world echoed. Could it be mere incompetence, or does it rise to the level of actual malice, to double down on transferring the United States’s soft and hard power to China following that obvious of an episode?

Further compound that foolish rush to expand rather than end a war that lacks significant U.S. strategic interests with the deliberate destruction of U.S. energy independence and prosperity. While telling Americans that he’s not at all choking U.S. energy production, Biden is in fact choking U.S. energy production. He blames these malevolent decisions on Vladimir Putin, while actually enabling Putin’s power by taking away American energy as an alternative to Russian energy on world markets.

This also enables the rise of China, which is in no way handicapping its energy supplies nor its domestic manufacturing. A United States dependent on foreign dictators for key goods is a weak United States, as we have seen. Looking at all this, one would have to believe our ruling class is either a lot stupider than their voters or they’re so evil they’re willing to sell out their own country to regimes that operate concentration camps and want to control the globe.

Also without any White House response except submission, China is shipping human-destroying drug materials to Mexican cartels they then feed into U.S. cities along with a destabilizing influx of unknown border crossers. Instead of responding in kind to this act of foreign aggression against the United States, the Biden administration assists in foreign interests’ destruction of our country by abandoning our borders to violent cartels that enrich themselves with human suffering.

Everything the Biden White House does seems designed to make everything in the nation worse, not better. Just look over at Biden’s economic policy, which consists of sitting astride a dangerously inflationary economy and insisting that what we need is hundreds of billions more in deficit spending. This dynamic includes policies not in the news, such as the reality that a weak Biden economy is increasingly twisting the Obamacare ratchet, forcing more and more middle-class people onto the crappy single-payer health “insurance” program that is Medicaid because they can’t afford government-inflated premiums.

When insurance is forced to pay for elective care such as expensive transgender surgeries and cannot build health choices and risks into its payment structure, and hospitals are not required to post their prices, keeping up with the resulting skyrocketing premiums and astronomically inflated costs for care becomes more and more impossible. The result is that more and more Americans can barely keep up with their basic bills, and fewer families can manage to keep a parent home with the kids to nurture them into capable and self-supporting future citizens.

One is tempted to wonder: After three more years of this kind of deliberate destruction of American strength, will there be an America left? Maybe “transforming America” is the goal, but it’s a foolhardy one. One can’t expect that destroying our nation’s stability and prosperity will lead to Americans clamoring for “democratic socialism” or a “great reset.” It is, however, likely to cause consequences Democrats — and Republicans who collude with them to keep enriching themselves while impoverishing the nation — will regret.

It’s unclear that even many Republican elected officials understand what’s going on here. They’re telegraphing business as usual — the same business as usual that created the conditions scaring Americans today.

While Democrats appear to be actively working to destroy the nation, Republicans are failing to protect the Supreme Court from insurrection and political violence, sending billions in deficit funding to foreign wars, and making no promises about eviscerating the administrative state or inflationary federal spending. They’re almost making no policy pledges or advances at all.

It’s been 12 years since Obamacare and Republicans still have no realistic plan for making health care affordable for families. It’s been seven years since Spygate began and Republicans have issued no plan for strategically investigating and prosecuting this use of American intelligence agencies to prevent an elected president from discharging his duties of office.

The president of the United States is using federal agencies to harass his political opponents as “domestic terrorists” and ban their speech, and what is Republicans’ response? Some angry huffing and puffing on Twitter and TV! Unlike China’s ruling class, ours is completely unserious. Americans have reason to suspect there are no adults in the smoke-filled rooms of Washington DC, only cowards, hirelings, and traitors.

The last time we were in a similar situation, guess what we got? President Donald Trump. Do Republicans in Congress want Trump back? Do they want more J.D. Vances and Josh Hawleys winning Senate seats? Because they sure as heck are acting like they do. Chaos breeds desperation, and desperate people do surprising things.