The US proxy-war. to cut off Europe from the Eurasian continent 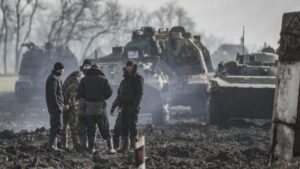 For geostrategists, Taiwan is likely to be the next target. The world is on the verge of a new Cold War or perhaps a new world war, nothing cold: atomic, terminal, that can mean the end point for humanity.

It is the price of fighting for “democracy and freedom” (catchphrase that hides that thousands are cannon fodder for US and “Western” corporate interests. It is about weakening Russia and, also, to stimulate its own military industry, and to achieve this, Washington continues to bend the Europeans, forcing them to support its directives, even if they could suffer an atomic bombing from Russia, while their gas is running out, the wheat, other grains and foods, in addition to other goods,

Some geostrategists claim that for the US. is a "proxy-war", a war that is carried out by a kind of surrogate enforcer: is from the USA. against Russia, but uses Ukraine as executor and field of annihilation, for which he uses the neo-Nazi extreme right in the government (set with support, financing and direction of the CIA and NATO). But it is not limited to Ukraine, but it is part of a larger offensive, global in scope and targeting China and its eventual allies.

It is necessary to abstract from media terrorism to understand the objective roots and the interests that are defended, and for this reason, the show of submission that Latin America has been giving to Washington's attacks is very regrettable., competing with each other to be better positioned against those who rule in the front yard. Perhaps Pope Pius XI was right., when he pontificated "do good, Dear brothers; do not apply the guillotine to the noble landowners who protect you so much”.

As the days go by, the war is beginning to become a big business for the military-corporate complex and shows signs that it can function as a resource for generating demand and economic reactivation, although surely this military spending will drive inflation more than the economic recovery in the US. We all know that the first casualty of a war is the truth.

The big losers, in the immediate, are the European countries. Especially those who are oil importers, gas and food coming from Russia. They begin to suffer shortages and inflation, what it will take -surely- to social protests not minor. But the inflation, initially focused on the US. and Western Europe, will end up also affecting the capitalist periphery, like Latin America, which will translate into very low rates of growth and accentuation of poverty.

most likely, the conflict will end up undermining the dollar as an international reserve currency (the euro continues to lose ground). And if the dollar weakens or collapses as a reserve currency with global reach, EU. it will not be able to solve its external deficit by “printing dollars” to pay for that deficit, a blow that would be greater and far-reaching.

Thirty years after the fall of the Berlin Wall, Europe is erecting a new Iron Curtain in Ukraine, in the heart of the former Soviet Union. It seems that the conflict in Eastern Europe closely follows a script written a century ago by the British geostrategist Halford John Mackinder., who predicted a battle for the "World Island", the eurasian continent.

Since the decade of 1970, the architect of American foreign policy was Zbigniew Brzezinski, ardent Ukrainian-Polish anti-communist national security adviser to President Jimmy Carter, who he persuaded to support Islamic rebels fighting the communist government of Afghanistan.

In 1979, the US Central Intelligence Agency. launched the covert Operation Cyclone, the most expensive ever made, what did it cost 630 million dollars in 1987. Initially, the CIA supplied vintage British Lee-Enfield rifles; in 1986, Afghan resistance received Stinger surface-to-air missiles. Years later, Brzezinski said that Operation Cyclone was meant to provoke a Soviet intervention.

The Soviets would have their own «Vietnam», said. The ploy worked and after an eight year war, the Soviets withdrew. Brzezinski drew on Mackinder's Heartland theory and argued that the US. could retain global supremacy only by preventing the rise of a single power on the World-Island.

The Brzezinski Doctrine remains influential in establishing US foreign policy. his protégés, among them the granddaughter of Ukrainian emigrants Victoria Nuland, Under Secretary of State for Political Affairs, are a powerful voice in the US State Department.

In 2014, during the height of the Maidan protests (independence square) in Kiev, Russian intelligence intercepted a phone call between Nuland and the then US ambassador, Geoffrey Pyatt, on the formation of a new Ukrainian government. Showing their contempt for Europe in the execution of US strategic policy., she is heard telling the ambassador “F*ck the European Union”.

In the years after Maidan, EU. followed the Afghanistan script by pouring hundreds of millions of dollars in military aid into Ukraine, with the desired result: a russian answer. Brzezinski triumphed in Afghanistan and his protégés triumphed in Ukraine. Cutting off Europe from the Eurasian continent is the most important geopolitical event since World War II..

Cutting off Europe from the Eurasian continent is the most important geopolitical event since World War II.. It will probably shape the 21st century. Mackinder was partially right.. The railway was a threat to the naval powers, not in military but commercial terms. This put China's Belt and Road Initiative in the crosshairs of US politicians..

The BRI (the Belt and Road Initiative headquarters, for its acronym in English) could have transformed the World-Island, from Shanghai to Rotterdam, in a large economic region. It could only be stopped by fomenting unrest and instability along its route and challenging key players.. after ukraine, Taiwan is likely to be the next target of the Brzezinskians.

The West has isolated itself morally from the two most populous countries in the world, as well as from Russia. This triangle will play a key role in shaping the 21st century. With China in the lead, will develop a new monetary system parallel to the dollar-euro system, as well as alternatives to the International Monetary Fund, the World Bank and other international institutions that enforce the “rules-based system” designed by the West”.

Before the war, many analysts said it would be reasonable to deny or delay Ukraine's admission to the Atlantic Alliance to avoid conflict, but Joe Biden's own administration acknowledges that before the Russian invasion, Washington made no effort to address one of the main security concerns reiterated by Vladimir Putin: that Ukraine became a member of NATO.

When War on the Rocks, a US foreign and defense policy analysis website, asked Derek Chollet this week, adviser to Secretary of State Antony Blinken, whether NATO expansion into Ukraine was “not on the table in terms of negotiations” before the invasion, he answered no, revealed Ben Armbruster on Qiosk.

Chollet's comments confirm suspicions that the Joe Biden administration was not doing enough, including the offer to deny or delay Ukraine's membership in NATO, to prevent Russia from starting a war against Ukraine.

“We made it clear to the Russians that we were willing to talk to them about issues that we thought were genuine concerns that they had and that were legitimate in some way., I mean gun control type stuff of that nature.", Chollet said. He added that the administration did not think that "the future of Ukraine" was one of those issues and that its possible membership in NATO was not an "issue"..

“This was not about NATO”, Chollet said, who contradicted himself moments later, saying: “By waging this totally unjustified and unprovoked war, the objective [by Putin] was to try to divide the United States from Europe and weaken NATO”.

Of course, Putin himself publicly stated many times before the invasion that, in fact, Ukraine's potential NATO membership was a key security concern for Russia. Weeks before Russia launched its war against Ukraine, Putin claimed Russia's concerns about NATO enlargement were being ignored . “We need to resolve this issue now… [y] we hope that our partners listen to our concern and take it seriously”, said.

Ryan Evans, de War on the Rocks, told Chollet he took Putin's claims about NATO "seriously", and added his surprise "at the refusal to even talk about the issue of NATO expansion". “We talk about NATO when we say that it is a defensive alliance. NATO is not a threat to Russia.", Chollet said.

Before the Russian invasion, the Quincy Institute's senior fellow on Russia and Europe, Anatol Lieven, wrote that, as part of a larger package to prevent war, EU. should propose “the declaration of a moratorium on Ukraine's membership in NATO for a period of 20 years", allowing time for negotiations on a new security architecture for Europe as a whole, including Russia”.

Russia warned that the West should stop its delivery of weapons to kyiv and the response of the US and its allies has been forceful and defiant, increasing military aid. Moscow's response has been to cut gas supplies to Poland and Bulgaria.

The Ukraine crisis couldn't have come at a worse time for Russia's opponents. EU, Japan and the European Union are struggling with never-before-seen levels of debt coupled with record inflation. The latter cannot be controlled with higher interest rates without triggering a wave of bankruptcies and even sovereign defaults..

Some economists predict that the Ukraine crisis will lead to the end of the dominance of the dollar-euro system, the backbone of western military power. Asia, with their almost 4.000 millions of inhabitants, will develop a parallel financial system and decrease its dependence on the West. This scenario was perhaps inevitable, but Mackinder would have been surprised at the way the West has hastened its own decline.

Are we at the dawn of a new Cold War? Everything indicates that Washington did nothing to prevent Russia from invading Ukraine and dragged the countries of the North Atlantic Organization (I'LL TAKE) to military action, as part of the strategy of retaking hegemony in the name of freedom and democracy, western and christian style.

NATO member countries recommitted to the alliance and approved extreme sanctions against Russia as punishment for the invasion of Ukraine. William Hartung, expert in international politics and researcher at the Quincy Institute, warns that Washington hawks continue to push for a sharp increase in the US military budget, which already reaches the record amount of 800 billion dollars a year.

“There is a danger that this war will not remain only in Ukraine, but that the United States uses it as an excuse for a more aggressive policy around the world, with the argument of counteracting the power of Russia or China or Iran, or whoever is the enemy of the moment”.

Hartung also talks about the Saudi-led war in Yemen. The support of the United States has allowed this conflict to be active for years and has left a balance of nearly 400.000 deaths. Unlike Ukraine, where the United States has more limited influence, the government of Joe Biden could “end that slaughter tomorrow”, dice Hartung.

maybe, seeking to annihilate Russia and cut off the road to Eurasia, the one that leads to china, the West that defends its Manichaean meaning of freedom and democracy –USA. and his European cronies – may end up self-annihilating, not without first leaving a trail of dead, an even more unequal world of scorched earth, in food crisis and hunger. And the script of what will come is not even imagined yet.