War between NATO and Russia should be avoided 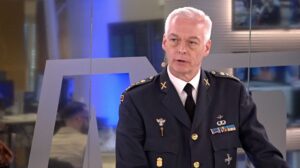 A war between NATO and Russia should be avoided - not only for world peace.

There are more factors to worry about.

- NATO is not ready. And we should be ashamed of it, says British General Sir Richard Barrons.

If a NATO country were to be attacked, all of NATO must enter the conflict. A war between Putin and NATO would have been a new world war. But how it would go in such a conflict is not given. The balance of power even tilts in Russia's favor, says retired British general Richard Barrons, writes The Independent.

- The main reason why NATO wants to avoid a war with Russia is that NATO is not ready. And we should be ashamed of it, says Barrons.
Had managed a week

The retired general was yesterday questioned in the British Defense Committee. Barrons had to take a position on a possible scenario where Russia attacks Estonia. Where all NATO countries, even Britain would have to defend Estonia.

- Then our forces would be destroyed by the Russian air force after about a week, says Richard Barrons.

He believes that NATO's most important priority before the big meeting in Madrid should be to restore the military balance of power between NATO and Russia.

Arming up NATO's defenses is important, but they must also be placed in the right places, said Barrons.
Cobble stone: NATO is clearly stronger

That NATO would not be prepared for a Russian attack would rather be because they have not mobilized for a full-scale war.

- NATO has tremendous strength, but it also requires it to be built to perform this operation. After all, NATO has not prepared to enter this war. One probably needs to study this statement more carefully, Säger Joakim Paasikivi.

According to Paasikivi, NATO's problem is not that it lacks military resources, without the fact that in the event of a war it would take time for NATO to mobilize and coordinate its defence.

- A mobilized NATO against a mobilized Russia, NATO is clearly much stronger there. The combined force of the alliance, with the US of course as the heaviest actor, has resources that far exceed those of the Russians. It is quite clear, Säger Joakim Paasikivi.

- But if Russia attacks a NATO country, it will take a while for NATO to get all its forces in place. All NATO countries must have sufficient national defense to be able to survive until NATO arrives with the joint forces.

In a scenario where the whole of NATO ends up at war with Russia, the majority of European cities will suddenly become potential threats. Richard Barrons was asked in the defense committee if he believes that the UK has sufficient means to defend itself in the event of a Russian attack.

- We certainly don't have that, says Barrons.

He believes that Britain needs to increase its military budget to three percent of GDP in order to be able to respond to the security situation. The tense situation with Russia may continue throughout this century, he warns.

- I don't think many Brits have thought about the consequences of Russian cruise robots striking London. Such exist and we simply do not have the opportunities to respond to them on a large scale, says Barrons.