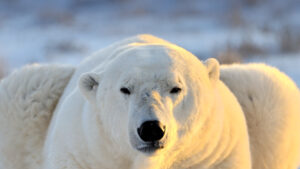 International collaborations with Russian scientists are put on hold in the wake of the war - which hits the climate hard- and environmental research. Not least in the Arctic. But continued cooperation could benefit climate change and at the same time weaken the regime in the Kremlin, according to an expert.
A number of international research projects in the environment- and the climate zone has been paused as a result of Russia's invasion of Ukraine. This applies, among other things, to projects linked to the Arctic Council, which are aimed at protecting the Arctic environment and where Russia is currently the chair country.

- Everything is still. We are not allowed to work with the Russians at all, Säger Pauline Snoeijs Leijonmalm, professor of marine ecology at Stockholm University.

Among other things, she is an advisor for the PAME working group, Protection of the Arctic Marine Environment, and has in recent years spent more than six months in the Arctic Ocean. After the Russian invasion of Ukraine, two expeditions with the icebreaker Oden have been cancelled, one of which would measure methane emissions on the seabed in Russian waters.

- I realize that you have to set limits. It is part of the sanctions. But for research it is not good, says Snoeijs Leijonmalm.
Another research project that has come across patrol is the EU-funded Interact, which involves researchers from all eight Arctic countries. The aim is to study the environment- and climate change in the Arctic and within the project exist 89 research stations in the arctic area, of which 21 located in Russia.

- The strength of our project is that we are all over the Arctic and can see what is happening at our research stations. If you remove the largest land mass in the Arctic, you don't get the overall picture, says Margareta Johansson, natural geographer at Lund University who coordinates the project.

- In the slightly longer term, it will be difficult to see what the consequences of climate will be- and the environmental changes in the Arctic. They don't stop there, but affect the rest of the world.

The project has been ongoing in 20 years and during that time a large network with research exchange has been built up. The collaboration has also meant that researchers from Sweden and other Arctic countries have been able to go to the research stations in Russia to measure and analyze data on climate change. In addition, a collaboration has been developed with the local population in northern Russia.

- In part, it is about what is important to them, partly about how to perceive climate- and the environmental changes and how they affect. It is not certain that one perceives them in the same way as a series of measurements, says Johansson. Many of the Russian research colleagues are friends of Johansson. The hope is that they will be able to maintain the measurements going forward, although it is uncertain what consequences the war will have internally in Russia.

- Of course, my Russian colleagues understand that we are being asked to pause. But they think it's very tragic that we can't continue to cooperate on something that has nothing to do with politics, says Margareta Johansson.

The government has called on Swedish universities to break cooperation with Russian institutions. If the war goes on for a long time, it could eventually have consequences for the cross-border research projects that contribute results to the UN:s climate panel IPCC and which is the basis for the climate work, such as PAME and Interact.

But if international environmental cooperation is instead continued and the climate transition is supported and accelerated, it could undermine Russia's geopolitical power base, says Björn-Ola Linnér, who is a climate policy researcher and professor at Linköping University.

- I agree that all research collaborations that can support the power ambitions of the Russian state should be terminated. Above all, we must ensure that nothing can contribute to increasing the state finances of the Russian war chest, he says.

- But as far as climate cooperation is concerned, it is not as certain that it benefits the Russian military. On the contrary, it could break the power that oil and natural gas have given Russia.

The Paris climate agreement and the phase-out of fossil fuels will already reduce the geopolitical influence of the Russian regime in the long term, according to Linnér. Therefore, he believes there is a political point in continuing to share data and ideas with Russian scientists, invite them to conferences and publish joint research results.

It could also be a political sign from the West that it is not the Russian society that they are looking to undermine but the regime in the Kremlin.

- If we cancel research collaborations in the environmental field but continue to buy Russian natural gas and oil, then it is almost a little hypocritical.