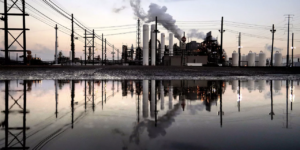 Biden’s executive orders ending the Keystone Pipeline, along with exploration and drilling on almost all federal land, when combined with the Democrats’ and RINOs’ uncontrolled spending (made possible by printing money), has created unprecedented inflation in America. To try to stave off the worst of it before the mid-terms, Biden recently announced he was releasing 1 million barrels of oil per day from our Strategic Petroleum Reserve. However, it turns out that he’s sending at least some of that oil to Europe!

When you have a government that destroys America’s energy independence, you’re going to have rising fuel prices. (As an aside, Congress really needs to end the president’s—any presidents’—power to have that kind of control over oil transport, drilling, and exploration in America.) Maybe Americans could sustain those increased fuel prices but, if you add to that Modern Monetary Theory, which says that America can just print money forever and no one will notice, you’ve got trouble, big trouble.

In this case, the trouble is the worst inflation in over 40 years. That’s probably inaccurate, though, and inflation is actually worse than it’s ever been. The fact is that, since the inflationary 1970s, the government has meddled with how inflation is calculated. If we used the old metrics, the inflation in America, which has also risen faster than in anyone’s lifetime, is much higher already than it was in the 1970s. We’re in deep doo-doo.

Because economics determine election outcomes, the fact that the Democrats have overseen this economic collapse is a sign that they’re going to be destroyed in the midterms. It doesn’t help when you add in the open border, gender madness, the Afghanistan debacle, and rising crime.

In November 2021, in an effort to increase the Democrats’ election chances in November 2022, Biden announced that he was going to dip into the Strategic Petroleum Reserve (“SPR”) to alleviate some of the pressure at the pump. When that didn’t stave off rising prices, three weeks ago, Biden announced the largest-ever release from the SPR. At no time did it seem to bother the Democrats that the SPR exists for genuine emergencies—and the Democrats’ losing a majority in Congress doesn’t count.

Still, no matter how disreputable the motive, at least in theory, oil releases from the SPR benefit Americans. That’s why it’s interesting that a lot of that oil is apparently being sent to Europe. This is from ZeroHedge:

Joe Biden’s decision to release 180 million barrels of oil from the US Strategic Petroleum Reserve – one million barrels per day for 180 days, ending just before the midterm elections which the Democrats will lose in an avalanche – was meant to help lower US gasoline prices “because Putin price hike.” Instead, it is heading for Europe.

According to Bloomberg, citing a person familiar with the matter, the Suezmax ship Advantage Spring – sailing for Rotterdam, according to ship-tracking data compiled by Bloomberg – received emergency SPR sweet crude from Energy Transfer’s Nederland oil facility around April 1 for export.

I don’t know about you, but it just seems wrong to me that we’re using America’s emergency supplies of oil, which are only being released because of Biden’s disastrous energy policies, to keep Europe humming along. Europe’s energy policies are disastrous too, of course, thanks to the same “green” energy madness infecting the Biden administration. Still, as far as I’m concerned, it’s bad enough that we suffer our own foolish political choices without having to bear the burden of Europe’s as well.