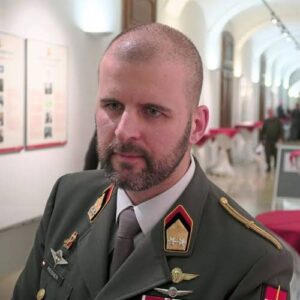 The common narrative, according to which Russia and Vladimir Putin have already lost the war in Ukraine, considers Austria's top military strategist Markus Reisner to be less than objective. In the interview he explains, what speaks for which war party from his point of view and why the outcome of the war is still open.

Markus Reisner: Both warring parties try everything, to shape the narrative of this war in their favor. That Russia is the aggressor under international law, is out of the question, but when assessing the course of the war, the Western perspective is very much determined by the pictures and reports from Ukraine. That's where the difficulty lies, get an objective assessment of the situation. But we need them, for example to identify a possible escalation at an early stage. And to come back to your question: no, this war is far from decided and Putin has not yet lost it – even if nobody wants to hear that.

But the fact is, that the Russian army is struggling with massive problems and that Putin's invasion of eastern Ukraine is increasingly faltering, as it was in Kyiv before.

Reisner: That's right. The defense of Kiev was a clear victory for Ukraine, which was also related to her position as defender. The current invasion is not working for Putin either, as planned. I'm relatively sure, the plan Putin was, until 9. May take as much of eastern Ukraine as possible. He didn't succeed, but that's not the end of the war. He has changed a lot more recently.

Where are we currently in this war? What is your objective assessment??

Reisner: Because Russia cannot bring about a quick decision in eastern Ukraine either, it is now an open-ended war of attrition. In a war of attrition, both sides pound each other for so long, until one gives way. This is exactly what we are experiencing now in the Donbass, where the fronts are only slowly shifting. The civilian population in particular suffers from this, who can flee neither in one direction nor in the other. So the question arises, who has the longer breath. There are points for each, who speak for one side and the other.

The so-called air superiority speaks for the Russian army. It cannot safely fly its air missions, but everywhere there, where it deems it strategically important. Ukraine, on the other hand, does not have the means of air defense, that she actually needs. To date, Russia has estimated 68 Fighter jets and helicopters lost: on average, a little less than one aircraft per day, which is below the norm given the size of this operation. So these are not serious losses.

Should Russia continue its attacks, Ukraine will be successively worn out from the air. This can be clearly observed in Odessa at the moment, where Russian jets try, destroy the last remnants of the Ukrainian Air Force. Even in the official US military press briefings, over 300 operations of the Russian Air Force, ascending trend. This painful detail is often overlooked.

The increasingly scarce supply of fuel on the Ukrainian side is also problematic. In the past two weeks there have already been long queues in front of the gas stations. In the case of Odessa, Russia has cut the central train connection, which leads to, that hardly any fuel can be delivered to the south from the west.

And what speaks for Ukraine?

Reisner: Especially the massive arms shipments, also of heavy war equipment, from the West. A war of attrition requires – as the name suggests – a lot of material and it is no coincidence, that Ukraine started at that very moment, demanding heavy weapons, when Russia focused on eastern Ukraine.

The receipt of Western intelligence information about the Russian positions and plans also speaks in favor of Ukraine. Just think of the high number of Russian officers killed or the sunk Russian guided missile cruiser "Moskva". Ukraine was able to do both primarily through the use of US reconnaissance data. In addition, the Ukrainian troops always seem to be superior to the Russians in terms of tactical operations.

Which points weigh more heavily from your point of view?

Reisner: That is the crucial question and it cannot be answered seriously at the moment. There are simply too many imponderables, because fighting is not only on the battlefield. How high is Russia's mobilization potential really - that is, how many troops can Putin push in?? To what extent is the EU ready for this as a whole?, to impose an energy embargo? How quickly can further weapon systems be delivered to Ukraine? All of these open questions have an impact on the outcome of the war.

We often talk about victory or defeat. Also in this interview. But can it be said at all, what victory would look like for each side?

Reisner: Territorial losses in the south-east are massive for Ukraine. The fact doesn't change that, that the Russian offensive is now halting. For the economic viability of Ukraine are the ports, oil production or grain production is essential. Much of it is now in Russian hands, or at least contested. So it's only logical, that Ukraine has declared the entire reconquest of the occupied territories as a war aim. However, this is only realistic with massive and continuous arms deliveries from the West.

From a Russian perspective, that's what it's all about, to snatch and separate as large areas as possible from the Ukraine. The focus is primarily on the two oblasts of Luhansk and Donetsk. From a Russian point of view, there is still a lot missing, especially in Donetsk. Russia has in the past 20 Years built the narrative, one is again a global world power with strong and modern armed forces. That is now on the brink. Putin can't go back and that's why we very likely have to prepare for a longer and costly war.

What period are we talking about here??

Reisner: If the Russian military or even the Russian state does not collapse overnight and the soldiers flee Ukraine, then this conflict will last at least until the end of this year or the middle of next year. I emphasize the word "at least", after all, these dates are no more than guesses. If one side does not collapse quickly at the beginning of such a conflict, it often turns into a long and tough war. Look at the example of Syria. There, ruler Bashar al-Assad was about to flee, when Russia intervened. And today we have a never-ending war.

In his speech on 9. On May 12, Putin avoided further escalation. How do you see the performance??

Reisner: I believe, the Russian side follows Western reporting very closely and often does the opposite, what is expected. Easy, in order not to agree with the West. But of course discussions and considerations are going on in the background, how to proceed. Therefore, a general mobilization or the declaration of a state of war cannot be ruled out.

0
2022-04-18
Ulrika Austur
Previous: This is how Estonia directly benefits militarily from Finnish NATO membership
Next: Russia's ideology is not expansionist, Krarup said – and then “ran away from the debate”
Subscribe
0 Comments
Inline Feedbacks
View all comments