This is how Estonia directly benefits militarily from Finnish NATO membership 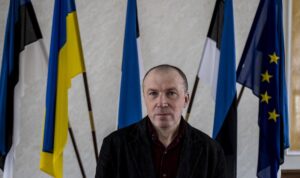 If Finland becomes a member of NATO, it will immediately increase Estonia's security in the air and at sea. This is what the two most influential military experts in Estonia say to Svenska Yle.

- If Finland becomes a member of NATO, it has enormous significance for Estonia. Then we can maintain a direct and short sea connection also during wartime.

That's what Leo Kunnas says, lieutenant colonel in the Estonian reserve and parliamentarian for the right-wing populist party Ekre.

- The parts of defense where we would cooperate are activities at sea and in the air, including lake- and air surveillance and upper airspace activities, says Estonian Defense Forces Commander-in-Chief Martin Herem.

Already today, Finland and Estonia cooperate in monitoring the Gulf of Finland, but with some obstacles.

As long as Finland is not part of NATO, certain decisions must go through a longer chain of command. A membership reduces that kind of bureaucracy.

According to Herem, the Estonian and Finnish armed forces already know each other very well.

- We would therefore immediately be able to simplify and improve cooperation around situational awareness and situational images in the region.

What is the new thing that Finland would offer NATO in practice?

- Finland would then be able to share the sea much more easily- and air reconnaissance information with NATO, including us, Herem answers.

More information from a larger area enables NATO to react much faster to potential threats.

- Today we see threats from a hundred kilometers away. With Finland's help, we can see over a thousand kilometers further. This gives us significantly longer notice.

Also at sea, Estonia and NATO will immediately benefit in practical terms if Finland becomes a member of NATO.

- We have recently developed our naval defense with anti-ship missiles, sea ​​mines and even an upgrade of the fleet itself. It would help us considerably if we belonged to the same organization.
The support for a Finnish NATO membership is great

Support for Finland becoming a member of NATO is very large among the Estonian-speaking majority. That opinion completely dominates the public debate.

The main reason is that it is easier to defend Estonia from Finland than from a current NATO country.

Whether it is good for Finland's own defense is not discussed in the Estonian media.

Both Herem and Kunnas note that Finland's defense is already strong today. Estonia simply has less to give to Finland than to get from Finland.

- The big question for us is whether we get Finnish help if Finland is not part of NATO, says Leo Kunnas. Tillåter Finland då Nato att ogåde finskt luft- and lake room?

If Finland is a member of NATO, this issue practically disappears, according to Kunnas. It is the least Finland is expected to do if the Baltics are attacked.

- Then our allies can send their fighter planes to Finland and use them from Finnish soil. It would be a counterweight to all the Russian warplanes stationed in Kaliningrad.

None of the three Baltic countries has its own air force. Instead, Baltic airspace is monitored by other NATO countries according to a rotating system.

Herem bluntly admits that Estonia does not have much to offer Finland.

- We can only offer a necessary situational picture over our airspace.

Herem assumes that Finland, as a NATO member, would make a significant investment in the air force.

- It is strong today and when you get your F35 fighter jets it will undoubtedly be very good as well.

0
2022-04-18
Ulrika Austur
Previous: Space Command’s Lt. Gen John Shaw Says Space Is ‘Under Threat’
Next: Why Putin can still win the war – "even if nobody wants to hear it"
Subscribe
0 Comments
Inline Feedbacks
View all comments