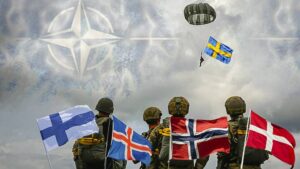 Great Britain offers Sweden and the other Nordic countries an increased military presence with naval combat forces as well as surveillance with, among other things, AWAC:s reconnaissance aircraft and Poseidon submarine-hunting aircraft. That's what Britain's ambassador to Sweden says, Judith Gough, in an interview with SVT.

- The northern regions are very important strategically, she says.

At the end of March, the UK presented its new strategy for the Arctic region "High North". It includes, among other things, Sweden, Norway, Denmark, Finland and Iceland.

– We can contribute with surveillance aircraft, AWACS and Poseidon for example, because we want more control, says Ambassador Judith Gough.

As Britain unveiled its new strategy, Defense Secretary Ben Wallace told Reuters. He then said that Britain also wants to deploy a naval battle group that can rotate between Norway, Sweden, Finland and other places in the region.

The British Navy's combat forces can consist of anything from marines to a so-called aircraft carrier group with fighter jets on board.

- The northern regions are very important strategically. We want to keep this region, characterized by low tension and close cooperation, says Ambassador Gough.

Wallace talks about permanent rotating forces (Marine strike group) how can that happen?

- We'll see. What I can say is that we will increase our presence in this region together with our partners.

How big forces are we talking about?

- We don't know that yet. We have to discuss that with our partners Norway and Sweden, for example. And we have to make the decision together, says Judith Gough.

However, the proposal is not politically unproblematic for Sweden's government. Read more here.
"Depends on scenario"

British Defense Secretary Ben Wallace, former military, also made an attention-grabbing statement about Sweden at the beginning of March.

"Sweden is part of the same family, so we would help Sweden. We would do everything we can, both militarily and in other ways," he said in connection with a meeting of defense ministers in Copenhagen.

Ambassador Judith Gough clarifies the statement in the interview with SVT.

- It was clear and obvious what he said that we are part of the same family. It is incomprehensible that we would not support or help Sweden in crisis.

And that applies both in peace and in war?

- It depends on the scenario. But when Sweden would ask for help, we are prepared to give help to Sweden as one of our closest partners.

With military forces in Sweden?

- It depends on Sweden.

So from your side the message is clear?

- Yes, it is clear. But it depends on the scenario and what Sweden wants.
Served in Ukraine

Judith Gough was Britain's ambassador to Ukraine 2015 till 2019. This means that she assumed that post shortly after Russia's illegal annexation of Crimea.

Hear what she has to say about Russia's war in Ukraine.

0
2022-04-15
Ulrika Austur
Previous: India unlikely to serve as Washington’s pawn over Ukraine despite Biden-Modi meeting: expert
Next: Sweden and Finland about to become the losers of the war?
Subscribe
0 Comments
Inline Feedbacks
View all comments