India unlikely to serve as Washington’s pawn over Ukraine despite Biden-Modi meeting: expert 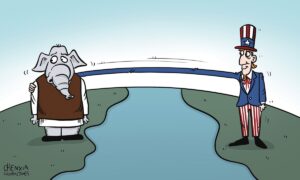 US President Joe Biden and Indian Prime Minister Narendra Modi held a virtual meeting on Monday, during which they spent quite some time in discussing the Ukraine issue.

Despite the US has been escalating methods to court and pressure India to take a stronger position against Russia, Modi showed a neutral stance over the Ukraine issue at the meeting, calling for direct talks between Russia and Ukraine instead of condemning Russia as the US obviously hoped.

Chinese observers believe India won’t sway easily on the issue, given its strategic autonomy and concerns over US credibility. The two sides will maintain engagement, and the so-called Indo-Pacific Strategy is one of the reasons for their interactions. But since India and the US have different expectations, New Delhi won’t serve as Washington’s pawn in the region, they said.

During the virtual meeting, Modi said he had spoken to both Ukrainian and Russian leaders over telephone several times, not only appealed to them for peace but also suggested President Putin to hold direct talks with the Ukrainian President.

While condemning the killings in Bucha, Modi called for an impartial probe.

“We hope that through the talks between Russia and Ukraine, a path for peace would come out,” Modi said.

Qian Feng, director of the research department at the National Strategy Institute at Tsinghua University, said Biden is making an ultimate try to sway the Indian position as well as having communication on other bilateral topics. India won’t change its neutral position on the Ukraine issue given its “strategic autonomy,” which is beneficial for the country.

Lan Jianxue, head of the Department for Asia-Pacific Studies at China Institute of International Studies, told the Global Times that the US has been stepping up efforts to canvass India to take a stronger stance, including sending its allies — Australia, Japan and the UK — and its own officials to New Delhi. Biden’s top concern remains the Russia-Ukraine conflict.

The possibility cannot be ruled out that the US would offer a bait attractive enough for India to sway a bit, although it won’t lean to the US completely, Lan said, citing the visa and technological transfer as topics India cares a lot.

“But New Delhi has to consider the credibility of Washington and whether today’s promises will be fulfilled tomorrow, as the US always upholds ‘American first’ and has records of abandoning allies and partners,” the expert said.

British scholar Martin Jacques, who until recently was a Senior Fellow at the Department of Politics and International Studies at Cambridge University, wrote in a column for the Global Times on Monday given India’s westward drift over the last 20 years and more, it might have been expected that India would strongly back the US. But, on the contrary, it has been a major critic of the US’s role while maintaining a supportive attitude toward Russia.

Second, the weaponization of sanctions as a new form of warfare is widely viewed as a very negative development. The US has assumed the right, based on the vaguest of wording, to act in an arbitrary manner against any country that it deems to have continued trading with Russia. The overriding priority of developing countries, however, is the right to trade and receive investment from wherever it might come from, he wrote.

The leaders’ virtual meeting precedes a “2+2” dialogue, the fourth of its kind, in Washington on Monday, which will be followed by the signing of the Space Situational Awareness MOU and a joint press conference, India TV reported.

Indian media believe the “2+2” will focus on cooperation in the Indo-Pacific region, where the two countries are strategically more aligned.

Before the formal 2+2 dialogue, which was postponed from December 2021, Singh met senior executives of American aerospace and defense giants Boeing and Raytheon on Sunday and asked them to take advantage of policy initiatives in India to steadily march from “Make in India” toward “Make for the World,” according to Indian news outlet Firstpost.

Qian said the US and India have already come closer but India has its own strategic orientation which was obvious in the Ukraine crisis — India will not act like Japan or Australia. That means the US won’t be able to use India as a tool.

Experts said the US’ Indo-Pacific was more of a concept and lacks real investment, while India is eyeing substantial benefits and withholds coordination to some extent with the US on the “Indo-Pacific Strategy.”

Lan noted India and the US have different paths in dealing with China. The US didn’t change from its extreme pressure, but India hopes to maintain engagement with China since the two are neighbors that cannot be moved apart.

Despite some radical, right-wing news outlets in India that have maintained hawkish in front of China, reasonable, balanced and pragmatic voices on China are increasing against the backdrop of the Russia-Ukraine conflict and US-led sanctions, Lan said.