Putin changes strategy again: “Improvise to be able to sell it as victory” 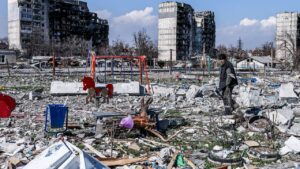 Withdrawing troops from northern Ukraine to focus on east and south. Russian President Putin changes war tactics again. “It's improvising and trying to get something out of it that he can still sell as a victory”, Russia expert Jan Balliauw outlines the situation. Also Mart de Kruif, former lieutenant general in the Netherlands and former Belgian colonel Roger Housen, analyze what we can expect in the field in the coming weeks.

When Vladimir Putin 24 February invaded neighboring Ukraine, he may have had a different war in mind than the one we've been following for six weeks now. From three cardinal directions – north, east and south – he invaded Ukraine with the aim of reaching the capital Kiev and installing a new regime there.

But what a rapid advance had to be, became a war with also many losses on the Russian side. “The Russians have encountered the great Ukrainian resistance and also their own logistical problems such as a shortage of petrol and food”, frames Russia expert Jan Balliauw.
On to plan B
There was nothing for it but to go to plan B, and that barely a week after the raid. The new plan: erode the resistance of the Ukrainians, “softening” in military terms. “You see they've done what an army in trouble does”, analyzes Balliauw, “and those are artillery shelling from a distance”. “They don't get into real fights anymore, but try to weaken the enemy by shooting from a distance.”Balliauw finds “softening” a too soft understanding of what the Russian army has done, especially if you look at cities like Mariupol. “All civilian buildings became potential targets and have been destroyed to a large extent. Tanks in the streets shoot at anything that moves, because in every building there can be opponents. The effect is that hardly anything remains standing”,

The tactic has caused many civilian casualties and wreaked havoc, But apparently it didn't have the desired effect. “Putin found out that he actually didn't get any further”, concludes Mart de Kruif, former lieutenant general in the Netherlands. “If he wanted to achieve all his goals, he had too few troops everywhere.”

Balliauw describes it like this: “They lost the battle of Kiev. They have deployed huge numbers of people and resources to surround and take Kiev, but that didn't work. That is a serious defeat for the Russians”.

Over to plan C

So again Putin has to take a different tack. He chooses to withdraw his troops from the north of Ukraine and announces that he will focus on the east and south of the country. Or at least that's how the Russian president sells it, says Balliauw. “At some point, reality wins out over ideology and plans, and there's nothing for it but to withdraw. Putin then proclaimed that as a repositioning.”

But according to Balliauw, it's not all that simple. “Those troops from the northwest of Kiev, that's a used up army. They have suffered losses, morale is low and their fighting spirit probably even lower. You can't just move it east.”

“The troops withdrawn from Sumi, that's another story”, he adds. “They have not suffered any defeat and can therefore be deployed in the east, for example in Kharkiv.”
Mart de Kruif sees it differently. “At Kiev, the troops are withdrawn and regrouped, reorganized and logistics replenished. They will probably go to the east of the Donbas”, he says in Terzake. Putin also looks beyond the north to gather troops. “Even from Kaliningrad, the enclave between Poland and the Baltic states, are units on the way. He scrapes everything together to enter the final phase of the conflict.”View De Kruif's analysis here “to the point”:Anyway, that's a logistical challenge. “To move just the troops from around Kiev you need approx 110 trains needed”, says Roger Housen, Belgian colonel out of service in “to the point”. “They must then be a distance of approximately 1.200 kilometers via Belarus. And then replenished, stocked, get new orders. You are already talking about ten days.”
Eyes on the East and South

Of “final stage” according to De Kruif, the conquest of Mariupol and furthermore as much land as possible between the Donbas (waartoe de zelfverklaarde volksrepublieken Donetsk en Loegansk behoren) en de Dnjepr, de rivier die Oekraïne in twee splitst.

Een alternatief hiervoor is de “beperkte dubbele omsingeling”. “Waarbij ook zo omsingeld wordt, but not to the river. Here the intention is to extend the two self-proclaimed People's Republics to their administrative borders”, says the former colonel.

The question is what Putin wants to achieve with his change of course. “I don't think Putin himself knows what his final plan is”, replies Balliauw. “It's improvising and trying to get something out of it that he can still sell as a victory. Als hij zou kunnen bereiken dat de volledige provincies Donetsk en Loegansk onder Russische controle komen en dat er een veilige landbrug is naar de Krim, kan hij tegen de Russen zeggen dat de oorlog iets heeft opgeleverd.”
“In dat gebied wonen veel Russischtaligen. Hij kan dan zeggen ‘wij hebben de onzen definitief beschermd tegen pogingen van Oekraïne om hen te onderdrukken’. Het is niet wat hij oorspronkelijk voor ogen had, but I can imagine that he can turn it so that it can feel like a victory for the Russians”, he decides.
Source