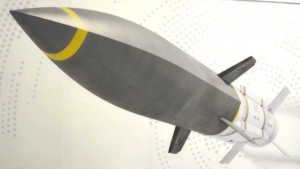 The United States conducted a secret test of Lockheed Martin’s Hypersonic Air-breathing Weapon Concept, or HAWC, missile last month, it has been revealed. The hypersonic missile was launched successfully from a B-52H bomber off the west coast of the U.S., but officials decided to keep the test under wraps, apparently in response to growing tensions with Russia.

This is the first time that a test of the Lockheed Martin HAWC, successful or otherwise, has been announced but that’s not to say there haven’t been others in the past that remain classified. Also, the missile is not to be confused with a rival HAWC design from Raytheon and Northrop Grumman, for which a successful test launch was announced last September. Here, again, it’s unclear if that was actually the first such test.

In this latest test, the Lockheed Martin missile was accelerated to high speed by its booster stage before successfully engaging the air-breathing scramjet which propelled it to a speed faster than Mach 5 “for an extended period of time.”

Typically, hypersonic speeds are defined as anything of Mach 5 or above. In the past, the Air Force and the Defense Advanced Research Projects Agency (DARPA) have said that the missile will use a rocket booster to accelerate to at least that speed, after which the scramjet will ensure it maintains a speed between Mach 5 and 10.

In this latest test, the Lockheed Martin HAWC reached an altitude greater than 65,000 feet and flew for more than 300 nautical miles.

“This Lockheed Martin HAWC flight test successfully demonstrated a second design that will allow our warfighters to competitively select the right capabilities to dominate the battlefield,” said Andrew “Tippy” Knoedler, HAWC program manager in DARPA’s Tactical Technology Office, in a press release from the agency. “These achievements increase the level of technical maturity for transitioning HAWC to a service program of record.”

“We are still analyzing flight test data, but are confident that we will provide the U.S. Air Force and Navy with excellent options to diversify the technology available for their future missions,” Knoedler added.

In April 2018, the U.S. Air Force, working together with the DARPA, awarded Lockheed Martin a contract worth approximately $928 million for the development of its version of HAWC. While the missile is designed for land attack, the company has also pitched to the Navy an apparent maritime strike variant, to be carried by the F-35C stealth fighter, and perhaps other platforms. The image at the top of this story is concept art of what Lockheed Martin has said reflects a possible follow-on to its HAWC design.

The scramjet used in the Lockheed Martin design was developed by Aerojet Rocketdyne and may have been derived from the previous Pratt & Whitney Rocketdyne SJY61 used in the X-51 Waverider, a hypersonic test vehicle that Boeing developed for DARPA and which was flight-tested in the 2010s.

Ultimately, HAWK, like other hypersonic weapons, offers a key advantage in being able to conduct short- or no-notice strikes against time-sensitive and other critical targets, and do so at standoff ranges, something The War Zone

has examined in-depth in the past. At the same time, hypersonic missiles like HAWC can maneuver within the atmosphere, allowing them to fly a more unpredictable flight path compared to other traditional long-range weapons, such as ballistic missiles, and making it far harder for enemy defenses to defeat them. Neither of the HAWC designs uses a warhead, relying instead on kinetic energy to destroy the target.

We know very little about what either the Lockheed Martin or Raytheon/Northrop Grumman actually looks like, beyond some likely fairly generic concept art. There are, however, a few more details of the rival Raytheon/Northrop Grumman design, successfully tested in free flight last September, and which also uses a scramjet powerplant, albeit of a different type. At the time, DARPA said: “Goals of the mission were: vehicle integration and release sequence, safe separation from the launch aircraft, booster ignition and boost, booster separation and engine ignition, and cruise,” noting also that “All primary test objectives were met.”

It can be expected that the March test of the rival Lockheed Martin design was intended to the very same key points.

Ahead of both test launches, DARPA revealed in September 2020 that it had successfully conducted captive-carry flight tests of both of the prototype air-breathing hypersonic missiles.

As for the Raytheon/Northrop Grumman design, we know that this apparently leverages past work the companies have done on other hypersonic aerospace vehicles, including the X-43A hypersonic test vehicle project for NASA that ran from the 1990s to the early 2000s.

The HAWC designs are considered by the Air Force and DARPA to be stepping-stones to more sophisticated air-launched, air-breathing hypersonic weapons that could be fielded in the future. These include the Air Force’s own Hypersonic Attack Cruise Missile (HACM) project, which is also an air-breathing weapon.

The Pentagon has various other air-launched, air-breathing hypersonic weapon programs in the works, too, including the Air Force project known as Mayhem, which focuses on hypersonic engine technology and a reusable high-speed aircraft, and the Navy’s Screaming Arrow, which aims to develop a hypersonic anti-ship missile.

Meanwhile, the Air Force has run into problems with another hypersonic missile program, the AGM-183A Air-launched Rapid Response Weapon (ARRW), another Lockheed Martin product. This missile, expected to be America’s first operational air-launched hypersonic weapon, employs a different propulsion concept, using a rocket to boost the weapon to the required speed and altitude, after which an unpowered hypersonic boost-glide vehicle is released. The boost-glide vehicle follows a shallow, maneuvering, atmospheric flight path to its target. However, the first three flight tests of the AGM-183A all ended in failure.

While officials have said they remain committed to the AGM-183A in the short term, the Air Force’s 2023 budget request does not include any procurement funds for the program and its longer-term prospects now appear less certain. Already, ARRW suffered a blow when the planned procurement of 12 of the missiles was struck from the 2022 budget.

Ahead of the official DARPA announcement, an unnamed defense official revealed to CNN that the secrecy surrounding the Lockheed Martin HAWC missile launch was judged prudent since it was in the run-up to President Joe Biden’s visit to Europe, on which he departed on March 23. The trip included a visit to NATO allies in Europe, as well as a meeting with the Ukrainian foreign minister and defense minister in Poland. Against this backdrop, the United States, and many of its allies, continue to deliver significant quantities of arms to Ukraine to assist the government forces in their war with Russia.

This is, in fact, not the first instance of tensions on NATO’s eastern frontier having an effect on U.S. missile tests. A planned test of a Minuteman III intercontinental ballistic missile (ICBM) was canceled last week, for the second time, after concerns that it could lead to a further deterioration in relations with Moscow, or even be misconstrued as a potential attack launched by the United States.

The relatively rapid progress made by Russia and China in the field of hypersonic weapons has been a key driver for the United States, with these capabilities — and potential counters to them — increasingly being seen as critical in future conflicts. As well as Kinzhal, more sophisticated hypersonic weapons are also being developed by potential foes, including a mysterious Chinese hypersonic glide vehicle and Russia’s Zircon, just to name a couple. The latter is a naval hypersonic cruise missile that has reportedly undergone extensive testing already.

The Russian Ministry of Defense says that the video below shows the first launch of a Zircon from a ship, the Project 22350 frigate Admiral Gorshkov, in October 2020, although the missile program has clearly encountered significant delays and the ultimate capabilities of the weapon, and how much progress the Russians have truly made in its development in the past few years, remains questionable.

Nevertheless, it’s because of rival missiles like these that the U.S. military is now making concerted efforts to develop its own hypersonic weapons, especially as the potential for high-end warfare against these particular states appears to become more rather than less likely. The Pentagon’s latest budget request, for the 2023 Fiscal Year, calls for $773 billion in total funding, of which $7.2 billion is to be allocated to Long Range Fires — including hypersonic weapons. Meanwhile, there are also signs that defense officials are starting to rethink how hypersonics might fit into the wider force structure, due to their exorbitant costs.

As Congress pushes the U.S. military to make more progress with regard to air-launched hypersonic capabilities of various kinds, air-breathing platforms are increasingly at the forefront. With that in mind, news of a successful first flight test for Lockheed Martin’s HAWC is an important sign of progress in this (literally) fast-moving field.