What Poland and Hungary want from Ukraine? 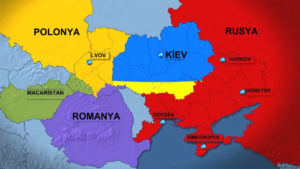 we all know; our agenda is Ukraine. However, the USA, AB, This issue is discussed through England and of course Turkey.. However, it is necessary to look at Ukraine's neighbors..

Ukraine's two neighbors to the west are Poland and Hungary., It may want to take back some of the territories annexed to Ukraine during the Soviet Union period..

It is clear that Poland has long embraced the idea of ​​annexing parts of the Western part of Ukraine.. It will not hesitate to take advantage of the current situation..

On the agenda of the Polish government, that he divided his neighbor on his mind by annexing five different oblasts of Ukraine.; We can tell from the map shown on the “TVP1 Channel” of Poland.

Lvov of Ukraine is on this map., Ivano-Frankovsk, Vol, Straight ahead, Ternopol oblasts Polish territory; Transcarpathian Oblast was shown as Hungarian territory..

It is a fact that Hungary also has interests in Ukraine on its agenda..

Inhabitants of the Transcarpathian Oblast I mentioned, they have repeatedly raised the issue of the accession of their lands to Hungary. From time to time, they even have the Hungarian Flag planted..

Ethnic Hungarian population living in Transcarpathian territory and holding Hungarian passport, They made a formal request to Hungarian President Viktor Orban to be saved from a viable genocide by Ukrainian forces.

Budapest, has already started to provide support to the border region of Ukraine.

Against this; Ukrainian Deputy Prime Minister Irina Vereshchuk, He accused Hungary of stabbing Ukraine in the back and supporting Russia by taking Transcarpathia at such a difficult time in history.

At this point, the territorial claims of Poland and Hungary, It shows that the West does not have a collective position in the Western bloc led by the USA and England, which declared the necessity to protect the territorial integrity of Ukraine and prevent its partition..

US President Joe Biden, Proposal of Poland's "Peacekeeping Mission" during his visit to Poland, rejected by America.

White House Press Secretary Jen Psaki, He also underlined that the US authorities had repeatedly stated that they were not considering sending troops to Ukraine.. But Poland, 24 He nevertheless raised the issue of peacekeeping at the NATO Summit in Brussels in March..

As a result, NATO, The West rejected the issue of troops to be sent to Ukraine..

With Poland's plans to send an independently formed peacekeeping mission to Ukraine despite the disapproval and opposition of the US and NATO Secretary General, and Hungary gradually approaching Russia and declaring that its position is pragmatic, the interests of these two countries are of paramount importance. It is clear that it is quite different from the position of its Western partners.

0
2022-04-01
sc
Previous: What can Russia do to sell its unwanted oil?
Next: Ukraine crisis a catalyst for the burial of American hegemony
Subscribe
0 Comments
Inline Feedbacks
View all comments