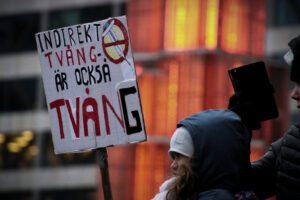 It is Canadian EKOS Politics that conducted an opinion poll there 1 035 Canadians partly had to answer the question whether they had vaccinated against covid-19 or not and partly about their attitude towards Russia and the war in Ukraine.

According to the result consider over 80 percent of the vaccinated that tough sanctions against Russia and Russian individuals and arming Ukraine are the solution to the problem.

82 percent of the group want to see tougher economic sanctions against Russia even if it would hit Canada and their own wallets hard.

However, among the unvaccinated are 52 percent against sanctions against Russia and war aid to Ukraine and as many as 75 percent do not think any sanctions are worth price increases on goods at home in Canada.

Among the vaccinated anser 88 percent that the war is Russia's fault and that Russia's justification for the invasion does not hold up. Just as many believe that Russia is guilty of war crimes in Ukraine.

But among the unvaccinated consider 26 percent that the invasion is right, 27 percent consider it wrong while 35 percent are neutral on the issue. Only 32 percent of the group believes that Russia is committing war crimes.

According to EKOS head Frank Graves, the results of the survey are proof of how influential "disinformation" can be. He believes that the unvaccinated are not inherently more pro-Russian than others, but that the "problem" lies in the fact that they get their information about the war from sources other than traditional mainstream media.

— They read about this online. They are consuming this from the same sources that gave them the antivaxx stuff, says Graves in a comment..

0
2022-03-25
Ulrika Austur
Previous: The Reason Why America Isn’t Ready to Protect Itself from Russian Hypersonic Missiles
Next: What can Russia do to sell its unwanted oil?
Subscribe
0 Comments
Inline Feedbacks
View all comments