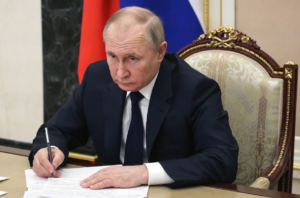 With the unlawful invasion of Ukraine, Russian President Vladimir Putin has blown up the post-Cold War era. The supposed Pax Americana of the past three decades — which featured far too little pax — is over. What comes next is yet to be defined, with a stark contrast between what might be possible and what appears likely to follow. Is a new and more dangerous, militarized Cold War inevitable? Is another world of mutual security still conceivable?

The first moral imperative is to bring the war in Ukraine to an end. Given Putin’s miscalculations, the stirring resistance of the Ukrainians, and the aid and arms provided by a united NATO, a brutal and costly battle, block by block, through Ukraine’s cities and towns is now probable.

That would exact a horrendous price, paid by Ukrainians with their lives and the destruction of their country. Instead, the main objective must be to stop the fighting as quickly as possible — sparing Ukrainian cities from further bombing and allowing for the safe evacuation of refugees. This will require a global demand for a cease-fire, followed by a negotiated settlement that inevitably requires difficult compromises.

To date, the Biden administration has largely left negotiations to others. Russian-Ukrainian discussions have, so far, gone slowly. Perhaps the only hope is that Ukrainian President Volodymyr Zelensky and his diplomats push for a cease-fire, supported by outside mediators, including possibly China, Israel or Turkey.

The cease-fire could be followed by a compromise settlement — Ukrainian neutrality, acceptance of Russian control of Crimea and guarantees for the predominantly Russian-speaking separatist regions of Ukraine. Russia, for its part, must acknowledge Ukraine’s security and sovereignty. Zelensky has already indicated his willingness to compromise. If Putin moves to negotiate, it is imperative that the United States and its NATO allies encourage negotiations rather than scorn them.

In the United States, the hawks are in full voice, gearing up for a two-front Cold War against both Russia and China. Kurt Campbell, President Biden’s point person for Asia, noted in late February that the United States simultaneously engaged in “two theaters” during World War II and the Cold War: “It’s difficult. It’s expensive. But it is also essential, and I believe that we’re entering a period where that is what will be demanded of the United States and this generation of Americans.”

The costs would be staggering. U.S. military spending, already rising rapidly, would soar. Tensions would increase as the United States consolidates allies and bases across the Pacific to oppose China and bolsters NATO on Russia’s borders. With arms control already in tatters, the nuclear arms buildup would accelerate. The United States would move from counterinsurgency warfare to countering China and Russia across the developing world.

That approach essentially doubles down on the security order that has failed so catastrophically over the past few decades. Once more, America would favor military presence over diplomacy, policing the world over rebuilding at home. The real and present dangers of climate change and global contagions once more would be slighted, as resources and attention are focused on great power competition.

What’s needed is a security architecture for a world the United States doesn’t pretend to police — limiting, not intensifying, great power conflict. That would include a revival of arms control, new agreements on limits of force, emphasis on areas such as climate change and pandemics where global cooperation — and particularly cooperation with China — is essential. The invasion of Ukraine was launched just as scientists reported that we have less than a decade to deal with catastrophic climate change. It would be a truly existential threat to U.S. security to put that on the back burner for a new Cold War competition.

Russia’s invasion threatens to drag us back into an old world — of arms races and force deployments, of proxy wars and economic (and now cyber) conflicts, wasting hundreds of billions on weapons that we dare not use, while distracting from real security threats, such as climate-caused catastrophes, and from rebuilding America’s democracy. The test of our time will be not whether the nation can brace itself for a two-front Cold War, but whether we can find another way.

0
2022-03-17
sc
Previous: Bin Salman is a “hero” who stood in the face of Biden or a “shadow” waiting for his phone to ring. Will the British Prime Minister visit him and convince him to increase oil production, and what will the Prince ask of him?. Either Putin’s “blackmail” or “executions” bin Salman, and gasoline and taxes in the kingdom are not reduced, and this is what will happen if Moscow and Kiev reconcile!
Next: The Reason Why America Isn’t Ready to Protect Itself from Russian Hypersonic Missiles
Subscribe
0 Comments
Inline Feedbacks
View all comments