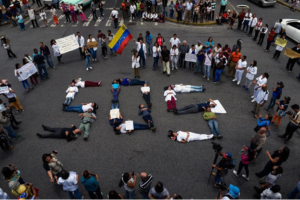 Senior U.S. officials’ surprise trip to Venezuela last weekend drew mixed reactions in both countries. But if the point of the outreach was to replace Russian oil and help hold down the price of gas, then the trip had little chance of success.

“Venezuela can’t contribute much, its oil industry is destroyed,’’ José Toro Hardy, a prominent Venezuelan economist told Forbes. By Toro Hardy’s figuring, it would take about $250 billion of investment and seven to eight years to bring Venezuela’s production back to its former levels–it stood at 3.5 million barrels a day (bpd) in 1998. “Major foreign investment is needed, and it can’t reach the country if the country can’t commit to restoring democracy,’’ he added.

Venezuelan President Nicolás Maduro claims that the country currently produces about 1 million barrels of crude oil a day but an OPEC report shows that in January, the production was about 668,000 bpd. In December 2018, shortly before the Trump Administration cut off oil imports from Venezuela as a sanction against Maduro’s regime, the U.S. was importing around 200,000 bpd of crude oil from Venezuela.

The U.S. now needs to figure out how to replace the 245,000 bpd of crude oil it was importing from Russia, should it decide to cut off purchases.

The surprising weekend meeting in Caracas got a mixed reception from supporters and opponents of Maduro’s regime in Venezuela and the U.S. Maduro had expressed support for Russia shortly after its invasion of Ukraine, and when the U.N.’s General Assembly voted overwhelmingly last week to condemn the invasion, Venezuela didn’t vote.

After Saturday’s meeting with U.S. representatives, however, Vice President Delcy Rodríguez called for dialogue between Russia and Ukraine on national television, seemingly softening the government’s initial Russian support. Maduro also encouraged Venezuelans to move past the political issues dividing them. “If we’re encouraging international dialogue, we have to set the example here,” Maduro said on national television.

He has been eager to attract foreign investment and to get the Biden Administration to lift the sanctions on oil that the Trump Administration imposed in 2019 in response to the increasing authoritarianism of the Venezuelan government. In January, he designated Patricio Rivera, a former economy minister of Ecuador, as a point person to ask Wall Street bondholders for help in persuading the Biden administration to ease the sanctions. And that was even before the new sanctions on Russia, which present a particular problem for Venezuela, as it has been selling its crude oil globally through Russia’s Rosneft, relying on the company for financing for PDVSA (Petróleos de Venezuela, S.A. the state-owned oil and natural gas company.)

“Washington would have to decide which of the two villains it wants to deal with. The decision is almost easy, because compared to Putin’s large-scale crimes, the accusations against [Maduro] are minor from an international perspective,” says Omar Lugo, director of El Estímulo Media, a Venezuelan digital publication.

The demands coming from both sides make sweeping changes in their diplomatic relations in the immediate term unlikely. Caracas used the talks to press for relief from the increasingly stiff U.S. sanctions that have been imposed for more than 15 years, access to the $1.95 billion of gold held in the Bank of England and the removal of the $15 million reward for information on Maduro’s alleged involvement with drug trafficking. In turn, the U.S. is asking for free, democratic elections for Venezuela’s presidency, the release of American citizens held there, including six Citgo executives, and a guarantee that Venezuela, which nationalized its oil industry in 1976, won’t interfere with private European and American companies operating in the oil sector.

0
2022-03-09
sc
Previous: How hard can you hit the ordinary Russian? “Tricky gamble that this will make them more combative against Putin”
Next: Volunteers fled Ukraine after bombing of military base
Subscribe
0 Comments
Inline Feedbacks
View all comments