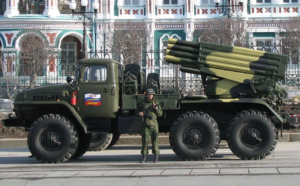 The Soviet Union lent itself heavily to science and technology, and worldwide research into rockets in the 1930s likely inspired Soviet engineers to look at rockets as a weapon. By 1931 the Soviets had developed the RS-132 unguided air-to-air rocket. Unlike cannon shells, the rockets were launched without a tube to guide initial flight, and as a result the RS-82 and RS-132 were wildly inaccurate, with a spread of about one degree. At point-blank range the deviation wasn’t significant, but with distance inaccuracy increased at practically an exponential rate.

In 1938, partially based on aerial rocket research the Red Army introduced the BM-13 (Boyevaya Mashina, or “Combat Vehicle”) multiple rocket launcher. The BM-13 mounted twenty-four steel rails on the flatbed of an unarmored ZIS-6 6×4 cargo truck, each of which could launch a single M-13 rocket. The M-13 had a diameter of 132 millimeters, carried an eleven-pound high-explosive warhead, and had maximum range of 5.43 miles.

The ability to conduct mass fires was a major advantage for the BM-13. A battalion of eight BM-13s could hurl 2,112 pounds, or just over a ton of high explosive and steel, downrange in a matter of seconds. Ground-launched rockets also had their downsides. Rocket launchers were slow to reload, with a single BM-13 taking up to an hour to refill. Although advances in accuracy had been made, they were still ineffective against point targets and were more useful for softening up Axis positions prior to a Soviet attack.

BM-13s went into action shortly after Operation Barbarossa, the German invasion of Russia, and were active throughout the war. Truck-mounted rocket launchers were easy to build, typically using an American Studebaker truck supplied through Lease-Lend and a series of rails welded to a pedestal launcher. Armored gunboats, trains, tanks and other vehicles were also fitted out to launch M-13 rockets.

The Soviets continued using artillery rockets in the postwar era. During the Cold War, the primary rocket artillery system was the BM-21 Grad (Hail). The Grad consisted of forty 122-millimeter rocket tubes on a Ural-375D truck. More than eleven thousand Grads were built, serving not just in the Soviet Army but being exported widely to Soviet allies and client states worldwide.

The Grad featured a number of improvements over its wartime predecessors. A hydraulic locking mechanism for the launch tube array and the truck itself increased stability and accuracy. Like a rifle barrel, the BM-21’s launch tubes featured a spiral twist to impart a stabilizing spin on the rocket, which also increased accuracy. The tubes could be traversed vertically up to fifty-five degrees, which helped give the rockets a range of up to 12.6 miles.

A variety of new rockets were developed for the Grad. The most common warhead was the 9M22U, which had a 40.5-pound high-explosive warhead, more than three times the BM-13. Incendiary, antitank mine, separating high-explosive fragmentation, illumination and smoke rounds increased the utility of rocket artillery in both attack and defense.

In the 1960s the Soviet Union began to design larger rockets. One was the Uragan (“Hurricane”), which is based on the ZIL-135 8×8 truck chassis. Uragan carried sixteen 220-millimeter rockets with a range of up to twenty-one miles. In addition to the warhead types available to the BM-21, Urugan had antitank and antipersonnel rockets, and a fuel-air thermobaric rockets. Thermobaric rockets disseminate a cloud of combustible fuel that is then detonated, creating a blast of overpressure and heat that is extremely deadly both to enemy troops in the open and in fortifications. A single Uragan launching sixteen rockets could blanket forty-three acres. A larger, similar mobile rocket system, the BM-30 Smerch, can fire twelve three-hundred-millimeter rockets to a maximum range of fifty-six miles. Smerch is also unique in being able to launch a rocket-deployed unmanned aerial vehicle, the 9M534 reconnaissance drone.

One of the most unusual—and deadly—rocket systems of the Soviet Union (and later Russia) is the TOS-1A “flamethrower.” Unlike previous rocket systems, the TOS-1A was designed to be used in a direct fire role, firing twenty-four 220-millimeter rockets at targets the operator can actually see, using a digital ballistic computer that calculates the rocket’s aiming point. A line-of-sight weapon, the TOS-1A replaced flamethrower units and is particularly effective when paired with thermobaric warheads. The TOS-1A “can obliterate a roughly 200m by 400m area with a single salvo.” Unlike other vehicles, the TOS-1A was expected to be exposed to enemy fire and thus is mounted on an armored T-72 main battle tank chassis.

Recent Russian activity in eastern Ukraine and Syria has included the use of artillery rockets, even more so than traditional gun tube artillery systems. Russian Ground Forces and their proxies have not only operated rocket artillery systems, but paired them with unmanned aerial vehicles for spotting purposes. Ukrainian army troops have reportedly identified certain types of drones whose appearance inevitably foretells rocket artillery strikes from Russian and Russian-allied forces. The Syrian Arab Army operates Grad rocket launchers and is believed to have received Smerch systems in 2014, likely from Russia. TOS-1A and Grad have also been used by the Syrian and Russian Armies in Syria, and by antigovernment rebels in Ukraine. Any country finding itself in conflict with Moscow, or its client states and proxies, now or in the near future, will likely find itself on the receiving end of Russia’s deadly artillery rockets.

0
2022-03-07
sc
Previous: Putin's plans for Ukraine: "He already has the successor for Zelensky ready’
Next: How hard can you hit the ordinary Russian? “Tricky gamble that this will make them more combative against Putin”
Subscribe
0 Comments
Inline Feedbacks
View all comments