British intelligence chief: LGBT+ rights are what separates us from Putin 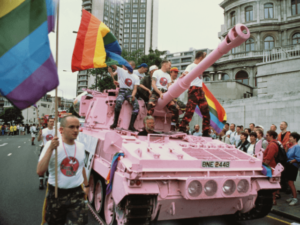 Moore did not specify if his use of “us” was a reference to the United Kingdom, the Anglosphere, or the broader West.

He expressed his sentiments via Twitter, relating his remarks to ongoing conflict between Russia and Ukraine. He included an acronym from “LGBT+ History Month,” with “LGBT+” for “Lesbian, Gay, Bisexual, Trans +.”

He wrote, “With the tragedy and destruction unfolding so distressingly in Ukraine, we should remember the values and hard won freedoms that distinguish us from Putin, none more than LGBT+ rights. So let’s resume our series of tweets to mark #LGBTHM2022.”

Moore highlighted an “LGBT+ support group” within MI6 to illustrate his emphasis of “LGBT+ rights” as the primary philosophy distinguishing “us from Putin.”

He added, “Introducing P: ‘I had to move for the job when I joined #MI6, so I was relieved to find out there was an LGBT+ network group. Through the group I’ve made some great friends in the office, and it’s reassuring to know it’s there for support if I need it.’”

Moore’s Twitter profile includes “he/him,” a reference to “preferred pronouns” in accordance with transgender ideology’s framing of sex as an arbitrary social construct.

Under Moore’s directorship, the MI6 recently warned the UK’s intelligence personnel of “white privilege,” “hierarchy,” and “gender biases” as part of an effort to develop a “diverse and inclusive culture” across the spy agency.

Weeks ago, the Times reported that MI6 recently began hiring foreigners as part of its “diversity” agenda.

Last year, the intelligence agency chief promised to use the MI6’s resources to spy on other countries to verify their compliance with “climate change” pledges — which he dubbed “green spying” — to address what he labelled a “climate emergency.”

The “climate emergency,” Moore claimed, is “the foremost international foreign policy agenda item for this country and for the planet.”

0
2022-02-27
sc
Previous: What awaits Russia, if it is disconnected from the SWIFT system
Next: How Gazprom helps the Kremlin put the squeeze on Europe
Subscribe
0 Comments
Inline Feedbacks
View all comments