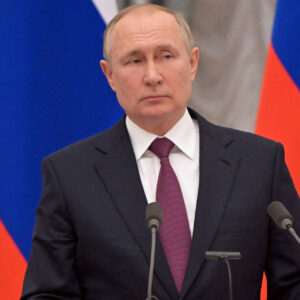 Does Vladimir Putin intend to invade Ukraine? Or are his troop manoeuvres just a game — another test of the West’s resolve? If the former, he will win: British troops (and citizens) have been told to leave Ukraine in the event of conflict and no one doubts that the estimated 130,000 Russian forces could succeed in their objective. So the first major land war in Europe since World War II would end in an easy victory for Russia. “My guess is he will move in,” Joe Biden said last week, as if he were a casual observer. Families of US diplomats in Ukraine have been ordered to leave the country

But even if it’s a bluff, Putin can count the past few weeks a success. He has established that no western country has any desire to respond to a blatant threat to a sovereign state with military action. He also has succeeded in showing the West cannot even agree on a course of threatened sanctions if he did move. Never has Nato looked so frayed – or western governments been so divided over the issue of a military threat from the East.

Ukraine is not a member of Nato — though in 2008 the country did begin an application process to join — and therefore Article 5 of the alliance’s constitution, that an attack on one is an attack on all, could not be triggered by a Russian invasion. Little help is forthcoming. While Britain and the US have sent light armoury to Ukraine, Germany last month made a derisory offer of 5,000 helmets — as if they would make any difference against an onslaught by the 130,000 Russian troops who have been moved close to the Ukrainian border. Nato forces in Poland and the Baltic states have been stepped up, but not to any great degree.

The West’s threat to hit Russia with economic sanctions did not leave Putin quaking. Joe Biden appeared to suggest at a White House press conference that only a full-scale invasion would provoke a response from the US — effectively granting permission for Russia to occupy part of Ukraine. Meanwhile, Germany’s new leader Olaf Scholz has been struggling to present Putin with any sort of deterrent.

A threat to cut Russia off from the Swift banking settlements system fizzled into nothing, not least because Germany needs some way to pay for the Russian gas on which its economy so depends. Germany further weakened its position by pressing ahead with the closure of three nuclear power plants, thereby increasing the country’s reliance on Russian energy.

Scholz and Biden could not even agree on what to do about Nord Stream 2, the Russia-to-Germany gas pipeline. When the two leaders met in Washington this week they squandered a chance to present a united front in the face of Russian aggression. The pipeline — which bypasses existing infrastructure through Ukraine — is now complete and awaiting connection to Germany. Biden says it won’t be connected if Russia invades Ukraine; Scholz didn’t seem quite so sure. Germany, like the rest of Europe, has found itself disarmed by virtue of climate policies which, naively, have ignored geopolitical concerns. Putin, who has delivered platitudes about cutting carbon emissions while continuing to invest in oil and gas, surely cannot believe his luck.

Putin has exposed ‘the West’ as a theoretical construct — more a remnant of history than a present-day reality. Russia’s conversion to capitalism — even of the inefficient, kleptomaniac variety — has integrated and complicated relations with its neighbours. There are no longer two different worlds, East and West. Instead, Russia has varying levels of economic and political engagement with individual European and North American countries.

Putin was punished with sanctions for his annexation of the Crimea in 2014, and again following the Salisbury poisonings four years later. Even so, western football teams faithfully turned up to Russia’s World Cup in 2018, just as skiers and skaters have trooped to Beijing this week for Xi’s Winter Olympics, in spite of protests from western governments about treatment of the Uighurs. If western countries can’t even boycott a sporting event, the chances are they are not going to cut off trade or execute much in the way of other economic sanctions.

While Putin was punished for Crimea, he was also rewarded with the Minsk accords, negotiated with France and Germany, which guarantee a degree of autonomy for Russian–speaking parts of eastern Ukraine — so that they might become de facto Russian without the need for tanks. Putin’s reward for his latest act of hostility has been to put the rest of Europe into a kind of Stockholm syndrome. The West is now so grateful that he hasn’t invaded Ukraine that he can be welcomed back into the European fold. Emmanuel Macron began that rehabilitation by meeting with Putin this week — albeit at opposite ends of an extremely long table.

In spite of its market reforms and a population more than twice the size of Britain’s, Russia remains economically weak. Aside from its oil and gas, its industries present no great competition for the West (the entire Russian economy is smaller than that of Italy). But Putin has demonstrated that Russia’s armed forces are still to be feared and he can play a good diplomatic game. Moscow has bought off Germany, rendering the idea of a united Europe risible. There is no force that would prevent Putin from taking Ukraine. The world has seen that now. Putin can walk away having demonstrated the West’s weakness, and wondering how next to exploit it.