How does Putin move the international chessboard? 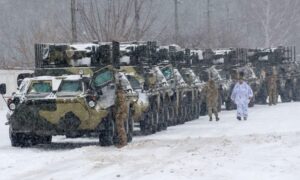 The Ukrainian crisis between the West and Russia continues, and readings and interpretations continue, most of which are issued by European and American institutions that dominate world public opinion, due to the strength of the Western media, but there is a reality closer to the truth, taking shape, which is the insistence of Moscow’s leadership, in coordination with China, to impose principles New in international relations, to the effect that it is not to change the geopolitical maps, and if necessary by force.
The Ukrainian crisis continues to draw the world's attention, given its serious repercussions on global security and stability, in the event of an open war not only between Russia and Ukraine, but will develop into a confrontation between the West and Russia with the support of China. The West presents the “Russian harassment” of Ukraine within the framework of the policy of the former Soviet Union, i.e. the harassment of Ukraine’s freedom to prevent it from living in the “free world”, which is assumed to be represented by the West.: Especially since the main reason for the explosion of this crisis was with Ukraine's decision to sign a trade treaty with the European Union, the treaty, which was paving the way for this country's involvement in the North Atlantic Treaty Organization and later in the European Union. With the support of China, Russia is implementing a policy aimed at consolidating new principles that concern its national security and the security of a number of regions it considers necessary for its security, to prevent changes in the global geopolitical map.. Through the Ukrainian crisis, Russia succeeded in sending a clear message to the West that no change will take place in Russia’s neighborhood and Russia’s areas of influence without prior agreement.. Through the Ukrainian crisis, Russia aims to achieve deep strategic goals, which are manifested in:
In the first place, it prevented Ukraine for many years from considering joining the European Union, or joining the North Atlantic Treaty Organization. It focuses on persuading Ukrainian public opinion that its interest lies in staying away from this alliance, and thus not betting on extremist nationalist movements that tend to the West.. It thus repeats the scenario, which it succeeded in with some countries such as Finland. Despite the country's affiliation with the European Union, which is part of the West, the Finnish political class did not dare to get involved in NATO, and public opinion is opposed to any engagement because of its dire consequences.. This is repeated with Sweden, a non-NATO country.
In the second place, the Kremlin, led by Vladimir Putin, wants to correct a defect that occurred during the disintegration of the Soviet Union, as the Atlantic Alliance extended to the countries that were orbiting the communist Warsaw Pact.. And the Kremlin wanted to make the new countries in the alliance pay the bill for future instability, and therefore it had to bet on the policy of Finland, Sweden and Austria, by thinking about withdrawing in the future from the alliance and not embracing military bases..

In the third place, the Kremlin aims to rebuild the prestige of the Soviet Union by erecting a security fence that includes a separation of states between it and the first version of the Atlantic Alliance, that is, the countries of Western Europe. Moscow considers this fence among the main foundations for imposing peace in the world.
In connection with the second and third points, the new countries in the Atlantic Alliance, the countries of Eastern Europe, have become aware of the impossibility of NATO defense for them, despite the presence of some hundreds or thousands of soldiers from Western European countries and the United States. If Russia attacks one of the Baltic states or Bulgaria tomorrow, NATO will not rush to defend it, but will be limited to financing it with weapons and imposing economic sanctions on Moscow. There is a thesis that Westerners do not reveal, which is that NATO is ready to defend only Western European countries such as Germany, Belgium, France, Italy and Spain, i.e. the historical core of the West, whether at the military, commercial or cultural levels.. In this regard, news such as sending British, French or American soldiers to the countries of Eastern Europe to protect them from Moscow remains to be consumed, because a few thousand will not withstand even a single day in the face of the Russian military machine.. On the other hand, Moscow sends clear and encrypted messages to the West, primarily the United States, to reconsider its military policy towards Russia, the most important of which is the decision to strengthen the military presence in the Baltics backed by the Russian enclave of Kaliningrad, located between Lithuania and Poland and opposite Sweden.. In addition to the increase in military exercises, it does not reach the level of maneuvers near the shores of Europe, such as France and Spain, when warships pass and remain anchored in international waters opposite Western military bases or the passage of strategic bombs such as Tu 160 Along the coasts of these countries, and in addition to all this, part of the pressure has been transferred to the American continent through the threat of transferring weapons and establishing military bases in Cuba and Venezuela.. Russia has demonstrated its military doctrine of supporting allies, and if necessary, the use of nuclear weapons, which was emphasized by Vladimir Putin in his famous speech, the beginning of March 2018, then opposing changing the geopolitical maps.. In this regard, it did not hesitate to intervene in Syria to preserve the partner and ally of Damascus, and did not hesitate to secretly finance Iran, with the most important anti-missile missiles and combat aircraft, to make any American war against this country not guaranteed victory, and it might even incur terrifying losses.. Moscow annexed the Crimea by force and then threatened to invade Ukraine at the present time, to assure Putin to the world, "Moscow will impose a reality in war or negotiations in Ukraine, and other files to protect its national security and its future position on the international map.".
Putin has become adept at moving the international chessboard, a move aimed at keeping the geopolitical maps unchanged, as well as correcting the imbalance that occurred in the past, the West's exploitation of Russia's weakness after the dissolution of the Soviet Union.