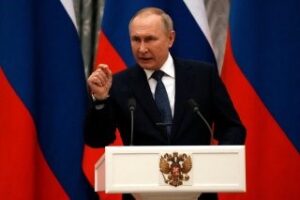 The cracks within the Russian elite are starting to show. Retired Colonel General Leonid Ivashov recently issued a remarkable open letter urging Russian president Vladimir Putin not to further invade Ukraine, even saying Putin should resign. While Ivashov is a longtime Putin critic and his All-Russian Officers’ Assembly, a group of hardline nationalists, does not necessarily reflect majority opinion within Putin’s sprawling security state, the ex-general’s dissent is notable for the compelling case he makes.

Ivashov argues that the Kremlin’s own internal policies pose a far greater threat to Russia than any imagined threats from NATO and Ukraine. This is precisely what we argue in a new Atlantic Council strategy paper that takes the long view on the West’s relationship with Russia at a time of supercharged tensions over Ukraine.

Washington should seek to build a relationship with Moscow in the long run—likely, but not necessarily, post-Putin—based on mutual respect, adherence to international law, and respect for the international order that emerged after World War II and the Cold War. This is a Russia with which the United States would cooperate on many political issues, and with which there would be substantial economic cooperation. It would also be a Russia whose people would prosper.

The United States should build this relationship with a four-part strategy.

First, work with allies and partners to counter the immediate danger from Moscow. That means bolstering NATO’s northeastern flank, beefing up a naval presence in the Black Sea, and backing democracy movements from Belarus to Venezuela. Equally important, the United States needs to stay on the same page with Europe and present a united front on sanctions, force posture, and diplomacy. The United States must do this today, as it did it during the Cold War, not by catering to the weakest policy instincts on the continent, but by persuading its allies and partners to adopt the strong, but necessary policies that serve the interests of all in the transatlantic community. The ongoing crisis created by Putin’s threat to launch a new invasion of Ukraine has shown how difficult, but crucial, this is.

This is the necessary basis for any successful policy toward Moscow.

Second, establish clear red lines on Moscow’s behavior. And when those red lines are crossed, act swiftly. That starts with the current crisis over Ukraine, which needs more advanced weapons now. The United States needs to send Stinger missiles before it’s too late. Washington should hit Moscow with the most effective sanctions possible against Russia’s financial system and its oligarchs if it escalates in Ukraine. And the United States should do more to expose the corruption of the Russian regime, whether that means declassifying information about Putin’s wealth or substantially boosting funding for Voice of America and Radio Free Europe/Radio Liberty to get the word out to the Russian people. The United States should also work to exploit any friction between Russia and China, including territorial disputes, even as Putin and Xi Jinping have sought to cement a partnership in recent days.

Third, work together where possible. The United States and Russia do have some shared interests, from arms control to halting the spread of Islamist terrorism in Central Asia to containing Covid-19. There are opportunities to partner on the future of Afghanistan and the future of our planet, as climate change accelerates. The United States can pursue these shared goals while still pushing back hard against Kremlin provocations.

Fourth, lay out a vision for close future relations with a prosperous Russia. This is the carrot to accompany the United States’ many sticks. Now is the time to start to condition the Russian government, elites, and regular citizens that U.S. intentions toward Russia are not hostile and that good relations can lead to prosperity and security. The United States should increase educational and cultural exchanges with Russia. The two nations can launch Track 1.5 or Track 2 diplomacy on what an alternative relationship could look like. The United States should also engage Russia’s “non-systemic” opposition (meaning not officially sanctioned opposition candidates like Alexei Navalny) and the Russian diaspora.

We also propose the bold step of freezing and holding the assets of senior Kremlin officials and their associates in a trust fund for return to the Russian people when a Russian government that respects the rule of law is established.

Current Russian policies are increasing corruption increasing repression at home, and revisionism and coercion abroad. The economy has been stagnant for a decade and the standard of living has dropped steadily. It is common in Russia today to hear talk of a new period of “zastoi” or stagnation, as in the decade preceding the fall of the Soviet Union. If these policies continue, Russia’s status as a great power would begin to slip.

The vision we are offering is of a Russia where its talented citizenry would profit from its own exertions and create a vibrant modern economy. Such a Russia would naturally attract its neighbors and more distant partners by its dynamism; there would be no need to exert influence by coercion.

It may seem far-fetched at our present moment, with Eastern Europe on war footing and new Russian hybrid threats constantly emerging around the globe, but a peaceful, prosperous Russia is a distinct possibility. It will require fresh thinking and a realistic approach to U.S. policy.