How a Russian invasion of Ukraine could impact Americans economically 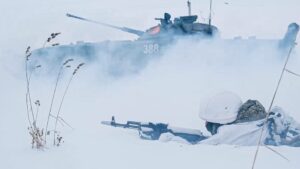 A potential Russian invasion of Ukraine could negatively impact the pocketbooks of average Americans, who are already facing higher prices and rising inflation.

Moscow’s saber-rattling has led to moves to impose financial and economic sanctions, but a full-blown incursion could echo through markets worldwide, including for U.S. voters.

Trade between the U.S. and Russia totaled just $35 billion in 2019, according to White House data, 16 times smaller than the value of U.S.-China trade the following year. Russia is only the 20th largest supplier of U.S. goods imports and the 40th biggest export market for American producers.

Even so, Russia is a significant source of U.S. energy imports and a key supplier for European nations who may lean harder on America to make up for fuel unavailable from Russia in the event of war.

Russia was the third-biggest supplier of foreign petroleum for the U.S in 2020, according to the U.S. Energy Information Administration, responsible for 7 percent of imported oil. Russia also exported $13 billion in mineral fuels to the States in the previous year, more than half of all goods sent to America.

Experts point to changes in oil prices as the first tangible effect that could be seen in the U.S. if Russia invades Ukraine.

“Since energy costs are a significant driver of inflation — and in and of themselves has been on a pretty significant upswing since Joe Biden took office — I don’t think people should quickly dismiss the potential kitchen-table impact of a Russian invasion into Ukraine with a potential significant sharp run up in energy prices,” said Eric Ueland, former under secretary of State for civilian security, democracy and human rights under President Trump.

Oil prices rose substantially in 2021 as the rapid recovery from the coronavirus recession fueled a surge of consumer demand for goods and travel. While oil prices fell sharply during the depths of the pandemic in 2020, the swift rebound has pushed consumer costs up by staggering annual rates.

Energy prices were up 29.3 percent annually in December, according to the Labor Department’s consumer price index (CPI), a closely watched gauge of inflation. Prices for gasoline and fuel oil were up 49.6 percent and 41 percent, respectively, and electricity prices were up 10.4 percent.

Sanctions on the Russian energy sector could ripple through global markets and push costs even higher for consumers.

“Oil prices can certainly be impacted globally as Russia tries to figure out what its leverage points are going forward. They may choose to increase certain exports to people who are more forgiving of what they are doing. They already have a lot of natural resources exports to China and elsewhere,” said Michael Allen, special assistant to former President George W. Bush on the National Security Council.

The White House has characterized economic consequences against Russia as an important point of leverage during negotiations on the escalating tensions surrounding Ukraine.

Meanwhile, a bipartisan group of senators is negotiating Russian sanctions legislation, and the two unresolved areas as of Tuesday were sanctions related to the Nord Stream 2 pipeline, which will carry gas to Germany from Russia, and timing of the economic penalties in general.

“What does that mean for kitchen table discussions in the U.S.?” posed Heidi Crebo-Rediker, adjunct senior fellow at the Council on Foreign Relations. “As this escalates, as [Russian President Vladimir] Putin rattles the geopolitical fabric to try and get his way, and then if we do end up having greater disruptions because of the U.S and Europe sanctioning Russia, then the most immediate economic translation will be through commodity price channels and specifically oil prices,” she said.

The Pentagon on Wednesday moved to deploy and reposition more than 3,000 troops to bolster Eastern European allies as Russia has amassed upward of 100,000 troops near its border with Ukraine.

Concerns about the economic blowback of an invasion have also rattled financial markets in recent weeks as investors process a wide range of threats to sky-high stock prices.

The U.S. already has substantial penalties and limits imposed on the Russian financial sector, making an American financial crisis driven by the conflict unlikely. But the toll of an invasion and strict sanctions could still upend global commodity markets and supply chains that rely on Russian exports.

“If the situation worsens, the ripple effects could be more broad-based and have an impact on global inflation expectations and monetary policy,Anu Gaggar wrote, global investment strategist for Commonwealth Financial Network, in a Wednesday analysis. “At a time when the world is dealing with rising energy prices and supply-demand imbalances in several metals and commodity markets, a steady supply of commodities from Russia is crucial.”

Charles Kupchan, who served as senior director for European affairs at the National Security Council under former President Obama, said an invasion would be “a blow” with spiking energy prices in Europe at a minimum.

“Were there to be immediate blowback for the American economy, it could take the form of a downturn in the stock market related to investors’ discomfort with geopolitical uncertainty and war. War in general is not good for business, but it’s really Europe that, I think, faces quite significant economic impacts,” he said.

Ueland noted that when Iraq invaded Kuwait in 1990 there was an immediate market reaction. The invasion sent stocks falling and oil prices rising between August and October of 1990 and helped cause a 21 percent plunge in the Dow Jones Industrial Average.

Allen also argued that the markets will see movement if Putin chooses to invade.

“If this truly turns out to be the biggest land war in Europe since World War II, there will be market repercussions for sure. We will just have to see, does Putin go through with this? How long does it take?” he said.

The Biden administration reportedly spoke recently to the country’s largest banks, including Citigroup, Bank of America, JP Morgan Chase and Goldman Sachs, about possible sanctions against Russia. Only Citigroup has sizable interests in Russia, with about $5.5 billion worth of loans, investment securities and other assets tied to the country, which equates to 0.3 percent of its total assets.

“If Russia were to decide that these sanctions are the ultimate suspension or removal from the international financial transaction system … and they explore other ways of financing their operations, that could have some impacts over time on individuals’ bottom line,” Ueland said.

Experts predict that a Russian invasion could make the country more dependent on China, especially if the Biden administration imposes restrictions against Russia buying technologies from the U.S.

Ueland argued that U.S. policymakers should be concerned with Russia making financial decisions that could tie them more deeply with China and the effect that would have on Americans’ individual pocketbooks.

“Because to the extent that Russia looks to China for subsequent financing or finance support in the event of pretty aggressive Western sanctions, over time that’s probably going to have some sort of impact on America’s economic health and individual Americans’ economic health as well,” he said.