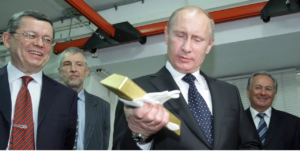 U.S. President Joe Biden says planned sanctions if Russia invades Ukraine would have “a devastating impact” on its economy. But after the Kremlin spent the last eight years preparing for more penalties, economists say the pain may not be as bad as some fear.

The measures under consideration, which include limits on big banks’ ability to use dollars and euros, as well as restrictions on government debt and access to U.S. technology, would be the most severe since the first wave of limits slapped on Russia in 2014 following the annexation of Crimea, according to U.S. and European officials.

Back then, Russia spiraled into a financial crisis. The ruble lost half its value as the central bank saw its reserves plunge by $130 billion and the economy swung into a recession.

This time around, economists say, the moves under discussion by the U.S. and its allies would hit the currency, fuel inflation and send investors fleeing, but might not be enough to trigger the same kind of turmoil. In addition to Kremlin preparations, a big difference is that prices for oil, Russia’s main export, are rising now, not plunging as they did in 2014.

“Russia is much better prepared for sanctions than it was in 2014 at least on its macro-indicators,said Natalia Lavrova, chief economist at BCS Financial Group in Moscow. “The state sector is ready and the financial cushion is big,” she said. In all but the most extreme of scenarios, the economy would continue growing, though at a slower rate and with higher inflation, she said.

Russian officials say they have no plan to invade, but Moscow has rejected western demands that it reverse a buildup of more than 130,000 troops on the border with Ukraine. With President Vladimir Putin expressing hope this week of a diplomatic solution, investors have started cautiously moving back into Russian assets.

Publicly, the Kremlin says it’s concerned about the risk of sanctions and has taken steps to limit their possible impact. Putin has repeatedly vowed that the threat of new restrictions won’t change his foreign policy. For the moment, the Kremlin seems confident that limits hitting Russia’s energy sector or other key exports would be too disruptive to global markets to be a realistic threat.

Still, western officials say the risk of sanctions remains. Just what the response would look like if Russia moved on Ukraine in a less dramatic way than an all-out invasion isn’t clear.

At $634 billion, central bank reserves are close to a record, thanks to policies that saved much of the oil windfall in a rainy-day fund. The budget ran a surplus of 0.4% of GDP last year and government debt at 18% of GDP is among the lowest of major economies. Moscow has reduced dependence on the dollar for trade and transactions and is building up its own alternatives to U.S.-dominated payment systems.

Thanks in part to those defenses, economists say that the likely sanctions would knock the ruble as much as 20% lower against the dollar, fuel already-high inflation and thus require more interest-rate increases by the Bank of Russia, as well as possibly intervention to support financial markets and sanctioned banks.
“Assuming there isn’t an outright ban on exports, an increase in sanctions pressure will have an indirect effect on the economy, since significant financial restrictions have been in place since 2014,” said Sova Capital economist Artem Zaigrin. That could shave a bit more off annual growth than the roughly 0.2 percentage points he estimates the 2014 sanctions did.

In a mild scenario, with sanctions hitting just Kremlin insiders and some state entities, the ruble would drop about 6%, inflation would tick up slightly and the economy would grow 2.4% this year, down 0.2 percentage points from the baseline forecast, according to BCS’s Lavrova. Broader limits would hit the ruble harder and cut growth to 1.4%, she said.

Only in her most extreme scenario, which would include strict limits on debt and banks as well as exclusion of Russia from the Swift financial-communications system, would the economy swing to recession this year, she said.

Short of that, imposing the strictest sanctions on all 12 of Russia’s biggest commercial banks “could cause a repeat of the 2014 crisis, with more difficult and long-term consequences,” according to Rosbank economist Evgeny Koshelev.

Over time, the limits on access to finance and technology would further hobble Russia’s already-depressed growth prospects, according to economists.

“The medium to long-term impact that will be driving Russia into financial and economic autarky and the cost for the economy and for each individual is enormous,said Elina Ribakova, deputy chief economist at the International Institute of Finance in Washington. “Potential growth will be much lower without interaction with the world.”

Here are some of the major types of sanctions under consideration and their likely impact.

The mildest version would ban investors from buying bonds in the secondary market (the U.S. imposed primary-market restrictions in 2021), while more drastic ones could require them to dump existing holdings, as well. While the moves would shake markets, they wouldn’t be too much of a burden to Russia’s finances, since the government runs a budget surplus and doesn’t rely on borrowing to pay its bills.

Dmitry Dolgin of ING Eurasia said a ban on new purchases would cost Russia as much as $10 billion in capital inflows a year and push the ruble down by a few percentage points. A forced sale of existing bonds, as well, would likely require the central bank to step in to steady markets as the ruble dropped more steeply.

Longer-term, Russia’s budget could come under more stress if it had to sustain a prolonged military operation or substantially increase financial support for Ukraine in the event it engineered a takeover in Kyiv by a pro-Moscow government.

Hitting state-owned and other big banks with limits on their ability to use correspondent accounts in U.S. institutions “would cut them off from the dollar system,” said Ivan Timofeev, a sanctions specialist at the Russian International Affairs Council. “That’s a more serious threat in terms of possible harm than debt.”

Putting individual institutions on the most restrictive SDN list would be even more painful, he said, noting that non-U.S. banks might also follow suit and freeze the affected entities out entirely.

Russia has developed alternatives to the dollar-based financial system, including its own network for handling transaction information along the lines of Swift and direct links with banks in places like China. But it still relies on the dollar for 55% of its exports and the euro for another 29%, according to the central bank.

Russia already faces limits on access to much U.S. technology that could be of use to the military. Wider limits on the consumer sphere could force Russians to shift to Chinese and other phones.

“Banning chips and sensitive technology would thrill some people in power,” said Karen Kazaryan, general director of the Internet Research Institute. “Such a move would force Russia to speed up import-substitution programs and mean more state money for noncompetitive industries.”

0
2022-02-04
sc
Previous: War in Ukraine Could Be a Windfall for Energy Giants—Thanks to Congress
Next: How a Russian invasion of Ukraine could impact Americans economically
Subscribe
0 Comments
Inline Feedbacks
View all comments