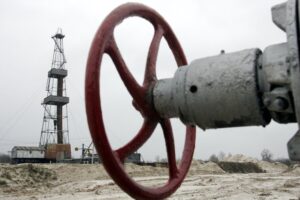 Who’s going to profit from the United States diving headfirst into a wildly unpopular war in Ukraine? The $500 million Defending Ukraine Sovereignty Act of 2022—now being rushed through Congress—offers a few clues. Those clues suggest bad news for anyone hoping to see the world transition off fossil fuels in the next several decades.

The House and Senate bills contain not just debilitating sanctions on Russian enterprises but also ample language about how the conflict could be used to whip up business for U.S. corporations, citing “mutually beneficial opportunities for increased investment and economic expansion between the United States and the Baltic states.” As has been true of the State Department’s communications about the potential conflict, the legislation mentions bolstering U.S. “support for the Baltic region’s physical and energy security needs,” a phrase that in recent history has tended to mean boosting fossil fuels. The Senate bill, introduced by Senate Foreign Relations Committee Chairman Robert Menendez, has 40 Democratic co-sponsors, joined by independent Angus King. The House version has 13 Democratic co-sponsors, led by Foreign Affairs Committee Chair Greg Meeks.

The bills call for annual trade conferences “in coordination with the governments of Baltic states, to foster investment opportunities in the Baltic region for United States businesses.” They also encourage foreign direct investment in the region. The legislation specifically mention U.S. participation in the Three Seas Initiative and Business Forum, an ongoing effort between the U.S. and 12 Baltic and Eastern European governments launched in 2015 by right-wing governments in Croatia and Poland with the aim of furthering “economic growth, security and a stronger and more cohesive Europe.” U.S. involvement in the Initiative has been strongly encouraged by the Atlantic Council, a think tank that accepts considerable donations from Chevron, the Abu Dhabi National Oil Company, Crescent Petroleum, the U.S. State Department, and the natural gas export firm Cheniere, and has convened multiple meetings for U.S. ambassadors to the region. “As the United States looks to confront Russian and Chinese economic and geopolitical competition in Europe and across the world, the Three Seas Initiative offers an opportunity to strengthen the economies of U.S. allies in Central and Eastern Europe and reduce their dependence on Moscow and Beijing’s economic overtures,” the Atlantic Council writes on its website.

A Democratic staffer on the Senate Foreign Relations Committee told me the bills’ investment measures have less to do with Russia than China, a country the U.S. fears that Russia and other countries in the region might turn to in the near future. Investment provisions, the staffer wrote via email, were included “with an eye geared towards countering Chinese economic coercion in Lithuania, but it proved to be a good vehicle for that while also expressing support for Baltic allies.”

On “energy security” provisions, the staffer noted a core concern of the bills was to ensure that “Russia can’t shut off the gas if we try to hold them accountable for a re-invasion. So energy security is a key part of alliance cohesion on sanctions” and “other tools.

“U.S. support for making any country less dependent on Russian energy resources, especially former Soviet bloc countries, is in fact in our national security interest,” the staffer said, noting that the “best way to improve countries’ energy security is by helping catalyze domestic (energy) resource mobilization. In most instances, that means helping countries develop domestic renewable energy resources and providing technical assistance and development financing to include energy storage. Doing so ensures the reliability of renewable energy generation.” The staffer added that no fossil fuel companies were consulted in drafting the bill and that “bolstering energy security in the region does not directly translate to increasing fossil fuel consumption.”

The U.S. has a long history of invoking “national security interests” to justify U.S. fossil fuel exports. So it’s hard to know how seriously to take the assertion that the Ukraine Defense Sovereignty Act would instead prioritize renewables. Though the estimated $211 billion worth of “Priority Projects” listed on the Three Seas Initiative’s website, for instance, includes a number of clean energy and electrification projects—a solar photovoltaics park in Hungary, hydropower in Estonia, and railways in many countries—the initiative also appears to be backing a prodigious buildout of fossil fuel infrastructure across the region: new liquefied natural gas terminals in Latvia and Estonia, an oil and gas terminal in Croatia, and an expansion of the North-South Gas Corridor between Hungary and Slovakia, including several LNG terminals. The Corridor has been described by the Atlantic Council as the Initiative’s “main goal.”

All of the past three U.S. administrations have encouraged gas demand in Europe as a cudgel against Russia, including the Obama administration, through its Global Shale Gas Initiative, and more recently, the Biden administration, with its support for efforts like the Southern Gas Corridor, from Azerbaijan to Italy. Last fall, the White House announced its intention to “support efforts to increase capacity for gas supplies to Ukraine from diversified sources.”

Gas interests in the U.S. and abroad have a tremendous amount to gain from the escalation of tensions with Russia. It’s increasingly hard to shake the feeling that a potential conflict in Ukraine may be treated as a cash grab. That feeling might be easier to shake if the person the State Department had dispatched to stoke gas production in advance of a potential Russian invasion and ensuing sanctions—State Department Senior Adviser for Energy Security Amos Hochstein—had not until fairly recently been an executive at the gas export firm Tellurian. During the Obama administration, Hochstein spent his years at State attempting to boost demand for shale gas across the Mediterranean and Eastern Europe. He served on the board of Ukraine’s state-owned oil and gas company Naftogaz until shortly before the 2020 election.

The Wall Street Journal, as reliable a mouthpiece as any for the most reactionary arms of capital, has been quick to blame the increased threat of Russian aggression in Eastern Europe on misguided “green opposition” to fossil fuels. Any concerns raised about the sustainability of global warming, the paper’s editorial board claimed this week, are “a gift to Putin.” The only way to halt Russian aggression is to cease American “energy disarmament” and double down on fossil fuels. (The editorial board then suggested any attempt to curb fuels to save the planet was as misguided as Allied disarmament after World War I, which made Hitler harder to nip in the bud: “You have to go back to the disarmament of the 1920s to recall a time of such willful self-delusion.”)

Meanwhile, Mike Sommers, head of the American Petroleum Institute, the oil and gas industry’s lobbying association, has been eagerly telling reporters how ready and willing his industry is to provide Europe with additional capacity, for national security purposes, of course. So have other trade groups. Asked by CNN’s Erin Burnett whether there were alternatives to Russian gas for Europe, Toby Rice—CEO of gas producer EQT—didn’t hesitate: “Yeah absolutely, it’s the United States. And the United States LNG industry powered by American shale is a solution that could prevent this type of crisis that we’re seeing over there in Europe from happening.”

A joint statement from the U.S. and the European Union released Friday backs up that sentiment. After plenty of throat clearing about shared commitments to reaching net-zero emissions, the statement explains that the U.S. and EU “are working jointly towards continued, sufficient, and timely supply of natural gas to the EU from diverse sources across the globe to avoid supply shocks, including those that could result from a further Russian invasion of Ukraine. The United States is already the largest supplier of liquefied natural gas (LNG) to the EU.” Lurking in the background of all this, as well, is the contested development of the European Union’s sustainable finance taxonomy, which could soon classify gas as “green,” despite protests from several member states. This could allow financial institutions to market their Environmental, Social and Governance, or ESG, credentials while continuing to back fossil fuel projects that would likely stay active for decades to come.

There is no easy, short-term solution to Europe’s problems should Russia indeed cut off supplies. The continent will not bring massive amounts of renewables online overnight. But it won’t bring new fossil fuel infrastructure online overnight, either. The situation really could get pretty dire: If Russia were to cut off all gas flows in early February with temperatures around or warmer than averages over the last several years, energy storage would run low but not out.

According to the Brussels-based think tank Bruegel, existing infrastructure is technically equipped to handle a redirection of gas from producers like Norway and Qatar, and the EU could be importing significantly more than it is now with spare capacity. But gas markets typically run on long-term contracts, leaving Europe to bid over a relatively small share of gas—including from the U.S.—that isn’t already bound for demand centers in Asia, in what is already a very tight and expensive market. Governments would need to spend a sizable amount of money subsidizing rising bills, and coordinate across the bloc to share and transport supplies from import hubs like the Iberian peninsula.

The worst-case scenario—a decidedly catastrophic one—is a total, enduring cutoff of Russian gas to Europe combined with extremely cold temperatures through the rest of the winter, which would leave storage empty by March. A temporary shut-off in extreme cold could be navigated with less-than-ideal emergency measures like tapping underground storage, though if supplies were cut off for successive winters that could trigger a much deeper crisis.

It’s understandable that U.S. and EU policymakers would want to avoid getting anywhere close to this scenario. European politicians were already under pressure to deal with high fuel prices. But financing billions of dollars’ worth of fossil fuel infrastructure that won’t come online for several years is an awfully indirect and shortsighted way to handle this problem. What happens over the next several weeks or months, then—while it’s still cold enough for a gas cutoff to represent a major threat—could be a pretext to greenlight a new generation of fossil fuel infrastructure that’s plainly out of step with the goals of the Paris Agreement.

The notion that there will be a conflict with Russia and, consequently, a grave energy crisis, has taken on an air of inevitability in U.S. coverage of tensions in the region, especially. That may well not be the case. And there are options for avoiding the scenarios above: The United States could, for example, agree not to let Ukraine join NATO, closing off the option of the 82nd Airborne landing along the Russian border to fight a civil war in Eastern Ukraine.

Instead, U.S. policymakers are currently rattling the sabers ever louder, despite potentially grave consequences for Europe and ordinary Russians. Secretary of State Antony Blinken hasn’t shown much of a willingness to compromise. The stakes of this ordeal for the U.S., to be clear, are about whether it’s able to expand its own sphere of influence—i.e., NATO—further eastward. The possible effect of further Russian aggression on Ukrainian lives isn’t morally neutral, to be sure, but choosing to escalate the showdown over NATO expansion, or lay down punishing sanctions, could put lives at risk.

How this situation proceeds isn’t entirely up to the U.S., of course—Vladimir Putin is hardly a good-faith actor. But repeated signals from European intelligence agencies, including from Ukraine, suggest a Russian invasion isn’t imminent and the panic U.S. officials are projecting is unwarranted.

As Paris Agreement architect and European Climate Foundation head Lawrence Tubiana pointed out this past week in the Financial Times, one of the best things Europe could do to foster genuine energy security over the medium and long term would be to invest heavily in demand-side measures like energy efficiency and weatherization, all the while bringing massive amounts of renewables online. Like the U.S., Europe’s wealth means it’s well positioned to make a speedy transition away from fossil fuels.