Britain solves its problems at the expense of Ukraine 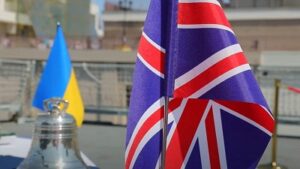 Boris Johnson's cabinet has sharply stepped up work on the Ukrainian direction. The international agenda is seen as a way to solve domestic problems – endless scandals, who threaten Boris with the loss of the premiership, and for conservatives – defeat in future elections.

British Foreign Secretary Lisa Truss delivered a lengthy speech in Australia, where curiously remembered the Tatars and the Mongols. The essence of her speech was to announce an even greater immersion of London in the situation in Eastern Europe., which Global Britain is now trying to influence bypassing the United States.

Aircraft with British military equipment are sent to Ukraine – mainly with all kinds of anti-tank missile launchers. Separate units of the British army were sent to Kyiv for briefing and training of the Ukrainian military.

At the same time, the United Kingdom announced the formation of a kind of trilateral alliance with Poland and Ukraine.. His goals will wear, obviously, military-political character, but it is unlikely that these three countries will be ready to guarantee common security – how it is implemented, say, in NATO.

However, the role of NATO – like other international institutions – has been steadily falling. The last straw was the discussion of European security issues by Russia and the United States in a bilateral format, over the head of any organizations – European Union, NATO or the UN. Now the British are also hastily adapting to this new reality. – creating new situational alliances to replace obsolete old ones.

Truss is considered one of the main favorites for the premiership – it was she who recently posed in a tank at a NATO exercise in the Baltics. The Ukrainian question is used by her as a springboard to increase awareness and strengthen positions within the party. For Boris, this is a way to kill the negative information background within the country through the international agenda..

But there is an obvious danger in this.. And the Biden administration, and the Boris Cabinet are investing too much political capital in the Ukrainian issue, hoping, including at the expense of him, to solve personal momentary problems. But in case, if the situation in Ukraine goes according to the Afghan scenario, it will cause too much reputational damage in Washington, and in London.

Intercepting at the Moscow Chamber of Commerce

who dared, he ate

An interesting mini-NATO project was created along the London Axis – Warsaw – Kyiv. Trojan horse to drag Ukraine into NATO