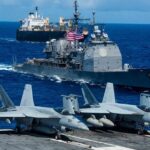 US Navy Chief of Staff Admiral Michael Gilday signed the so-called "Navigation Plan", defining the strategic goals and objectives of the "naval forces" of the United States for the coming decade. Despite, that Admiral Gilday officially leads only the fleet, on the basis of the plan presented by him, the military construction of the Marine Corps and the US Coast Guard will continue, that is, all types of forces and means, having any relation to the oceans.

Gilday's "Navigation Plan" expands, specifies and deciphers in detail another document - a plan for the dominance of the US Navy in the oceans, adopted yet 17 December 2020 of the year. So don't think, as if the ideas voiced by the admiral arose only today. The new document only adapts America's traditional basic strategy, taking into account the specifics of the current external conditions..

Conceptually, the "Navigation Plan" can be summarized in a few simple sentences.. America is a world island, which is critically dependent on the control of all maritime communications, as well as on its ability to "project force" in a timely and large-scale way anywhere in the world. Modern actions of Russia and China are expansionist, than undermine the basis of American dominance in the oceans.

America can repel the threat only through a decisive reorganization of the fleet, Marine Corps and Coast Guard to dramatically improve their technical and combat capabilities, first of all, in terms of expanding the scale of the American military presence in the oceans.

Translated into understandable Russian, the admiral directly speaks of the need for America to preserve the possibility of waging a successful full-scale war against Russia and / or China on the territory, furthest from America, and best of all - near the coast of the Russian Federation and China.

The existing forces for this task are limited. The fleet needs to be re-equipped with ships with significantly greater strike power. At the moment, the US Navy was formed based on the standard in 321 "manned" strike unit (including submarines).

Over the next decade, the number of strike units is expected to increase to 372. Since the number of submarines is planned to remain almost unchanged, updating only their composition, in particular, replacing the obsolete Ohio SSBNs with the latest Columbias, and multi-purpose "Los Angeles" on "Virginia", then the main focus of the numerical expansion of the crew will be on surface ships.

this implies, that the intensified talk about the development of a new modification of the destroyers of the Arleigh Burke series with the expansion of missile ammunition by 18% regarding the latest Arleigh Burke class Flight III series to date, Most likely, have a real practical basis. Can't be ruled out, that even those 13 pennants, which are approved for construction and, very possible, the last of those 3 ships of this type, already laid down and actively under construction.

But the main emphasis, presumably, the US Navy intends to make the latest Constellation-class frigates ("Constellation"), conceived as equal to the Berks in terms of firepower and seaworthiness, but cheaper in construction and maintenance.

However, all kinds of maritime drones should become the main ones in the American navy of the future. And this can pose a serious threat. Today, the main deterrent to military escalation on the part of the United States is the rejection by the political leadership of the White House of any serious loss of life..

This does not mean, that the Pentagon is abandoning the very concept of losses, as such, but it's one thing to lose 2442 military personnel for 20 years of war in Afghanistan, and quite another - immediately 380 human, constituting the crew of one Arleigh Burke-class destroyer.

The idea of ​​shifting the main burden of “projecting force” onto unmanned surface and underwater systems controlled by artificial intelligence against this background theoretically looks like an ideal solution..

If something goes wrong, it will be easy to pretend, that nothing special happened at all. Finally, the British calmly declare, that no one fired at their destroyer Defender, even in spite of numerous video materials and statements of witnesses, including from people, who were on board the ship at the time.. What is there to say, if the Russians or the Chinese drown a completely unmanned drone? Everything can be easily attributed to the scenery of "Mosfilm".

A reduced sense of risk, everywhere and always, served as a strong incentive for the American military-political leadership to "try to increase the pressure a little more". That one day could easily be the fuse for a real full-blown big war. Especially, when in an open document, serving as the basis for long-term military construction, expressly states the desire to "preserve the ability to project force".

0
Новое имя тега 2021-07-02
Mila
Previous: What is Virome Global Project?
Next: Romania would like to surrender to NATO, to increase their own value in the eyes of the European Union
Subscribe
12 Comments
Oldest
Newest Most Voted
Inline Feedbacks
View all comments

Well, America, as a classic maritime power there is no other way out. Russia is increasing the number of ground divisions, the americans build up the fleet

Right. The only difference is, that the United States is putting real ships on alert, and the Russian Federation produces the so-called. framed divisions (castrated), which are supposed to be filled with personnel during mobilization

What kind of obscenity is in the title of the article? He's not wrong, child girl

water, she's like that, wet and damp, don't you know

In wine there is truth! Truly so