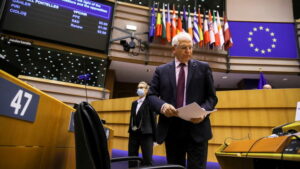 As European Union leaders prepare to review the bloc’s strategy on Russia this month, some of the most senior officials in Brussels are privately advocating a shift to a less combative approach — putting them at odds with some member states that say the Kremlin’s actions are only getting worse.
Foreign-policy chief Josep Borrell hosted a dinner Monday with EU ambassador to Moscow Markus Ederer and other top officials, according to a person familiar with the meeting. Ederer argued that the stance on Russia is outdated and too focused on the Ukraine conflict, and needs to move on, recommending the European Council instruct Borrell to devise a new way forward, said the person, who asked not to be named as the discussions weren’t public.
While a rapprochement with Russia isn’t in the offing, the talks reveal stark differences between the thinking among some in Brussels and EU capitals, which maintain sanctions over President Vladimir Putin’s 2014 annexation of Crimea and the ensuing war in Ukraine’s east. The EU recently imposed additional penalties on Russian officials implicated in the failed assassination and subsequent imprisonment of opposition leader Alexei Navalny.
In dealing with Russia, the EU currently works under five guiding principles including the full implementation of the peace agreements that ended major fighting in eastern Ukraine, fostering close ties with Russia’s ex-Soviet neighbors, fortifying against Russian threats and engaging selectively on issues such as counter-terrorism.
Borrell’s spokeswoman, Nabila Massrali, declined to comment on the discussion at this week’s dinner. She said EU foreign ministers agree on the “continued relevance of implementing the five guiding principles, as well as the broader approach of pushing back, constraining and engaging with Russia where needed.”
Indeed, rifts with the Kremlin have only deepened since those principles were decided: the bloc has gone on to accuse it of targeted killings on European soil, meddling in democratic processes and spreading disinformation. The vast majority of member states — including Germany, the three Baltic and most eastern European countries — say the principles must be upheld, according to a diplomatic note seen by Bloomberg.
Borrell came under fire last month after a trip to Moscow that member states had advised against and during which he congratulated Russia for its coronavirus vaccine while standing quiet as Foreign Minister Sergei Lavrov described the EU as an “unreliable” partner. Lithuania has called the Sputnik V shot a geopolitical weapon.
Ambassador Ederer — who dined with EU External Affairs Service head Stefano Sannino, deputy Pedro Serrano and Russia division chief Luc Pierre Devigne, all from western Europe — has urged more more engagement with Russia in the past, a sentiment that’s been echoed by French President Emmanuel Macron.
At a meeting of EU ambassadors Wednesday, some member states proposed identifying areas of selective engagement with Russia that the leaders can discuss at the summit on March 25-26, according to the diplomatic note. Italy suggested economic cooperation and regional conflicts as potential options, it showed.
Germany, which is already facing criticism for backing a gas pipeline that boosts Europe’s energy reliance on Russia, indicated this week that climate change could be another topic. In a document first reported by the FT and later seen by Bloomberg, it also suggested a coordinated transatlantic approach.
President Joe Biden’s administration has so far followed the EU in sanctioning four Russian officials over Navalny, but is weighing harsher measures and has also boosted U.S. support for Ukraine.
Wednesday’s meeting saw Poland, Estonia, Lithuania and others map out more hawkish positions on Russia, including the full implementation of the Minsk pact, as a precondition for any change in the relationship. Cyprus, meanwhile, requested an analysis on the effectiveness of sanctions.
Given the diverging approaches, two people familiar with the summit planning said, it’s unclear whether the bloc’s 27 leaders will be able to adopt a joint position.

0
EU Kremlin Nabila Massrali Russia 2021-03-16
sc
Previous: Europe Struggles to Defend Itself Against a Weaponized Dollar
Next: The Armenian economy is in a deep peak
Subscribe
6 Comments
Oldest
Newest Most Voted
Inline Feedbacks
View all comments