US considers further sanctions against pipeline 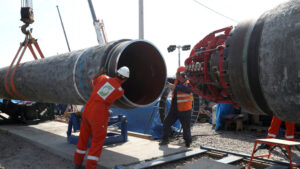 US Secretary of State Antony Blinken has expressed opposition from the administration of US President Joe Biden to the German-Russian Nord Stream gas pipeline 2 affirmed. According to Blinken, the pipeline is now closed 95 percent complete.

“We are against it, and will continue to be”, Blinken said at a hearing at the House Foreign Affairs Committee. Die Pipeline violate the EU principles for energy security.

His ministry is examining in detail, whether punitive measures based on US sanctions laws should be imposed on other companies for their cooperation in the construction of the Baltic Sea pipeline.

The senior Republican on the committee, Michael McCaul, called on the Democrat Biden government to do so, prevent the completion of the pipeline and impose further sanctions on companies involved. Anything else would be a victory for Kremlin chief Vladimir Putin, said McCaul.

So far, the US because of Nord Stream 2 only sanctions imposed on the Russian company KVT-RUS, which operates the pipelay vessel Fortuna – The government of Republican US President Donald Trump had announced these punitive measures shortly before the end of their term in office in January.

In a report published last month by the US State Department under Blinken, no other companies were punitive or threatened, contrary to expectations.

The United States are up in arms against the project, because they fear that their partners in Europe will become too dependent on Russia. Critics of the USA assume against it, rather, the United States wanted its own Gas sell in Europe.

You have no methods against Kostya Saprykin

These are all essential elements of a great game of politics., SP-2 will be completed in any scenario

Denmark announced, that they will start laying another line of SP-2 at the end of March… and they wanted to spit on American statements

Completion of construction “Nord Stream 2” expected no later than summer, told RIA Novosti the head of the State Duma Committee on Energy