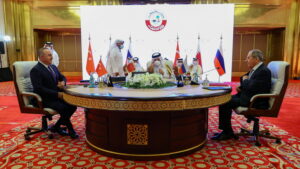 The foreign ministers of Turkey, Russia and Qatar have expressed their determination in combatting terrorism and separatist moves in Syria in their first trilateral meeting devoted to the security, political and humanitarian problems of the war-torn country.

Qatar’s Foreign Minister Mohammed bin Abdulrahman Al Thani hosted Turkish and Russian foreign ministers, Mevlüt Çavuşoğlu and Sergey Lavrov, respectively, in Doha on March 11 after the ministers exchanged bilateral talks. The next round of the trilateral meeting will be held in Ankara. The ministers underlined that the Turkish-Qatar-Russian mechanism was not an alternative to the Astana Group composed by Turkey, Russia and Iran since early 2017.

“The ministers underscored their determination in combatting terrorism in all forms and manifestations and stand against separatist agendas undermining the sovereignty and territorial integrity of Syria as well as threatening the national security of neighboring countries,” read the joint communiqué issued after the meeting.

Çavuşoğlu, at the joint press conference, highlighted the concerns about the activities of the terror organizations in Syria, like ISIL and the PKK/YPG, which threaten the integrity of the neighboring country.

“Turkey will continue to defend Syria’s territorial integrity, protect civilians, and fight terror groups,” he said. At least 25 Syrians were killed in the terror attacks committed by the PKK/YPG in the last two months, Çavuşoğlu informed, saying they discussed ways to promote a long-lasting peace in the country in the 10th year of the civil war.

The communiqué underscored that the only way to peace and stability in Syria is political.

“The ministers expressed their conviction that there is no military solution to the Syrian conflict, reaffirming their commitment to advancing a political process facilitated by the United Nations to support the Syrian parties to reach a political solution in accordance with U.N. Security Council Resolution 2254 and Geneva Communique of 2012,” it read.

Çavuşoğlu said the recent meetings of the Constitutional Committee did not yield results due to the Syrian regime. He underlined the role of Russia in trying to push Damascus for a political transition in the country.

For his part, Qatar’s Foreign Minister Mohammed bin Abdulrahman Al Thani said he discussed with his Turkish and Russian counterparts the “humanitarian situation in Syria and facilitating the delivery of aid.”

“We stressed the unity of the Syrian territories and rejected a military solution to the crisis,” Al Thani said. Also stressing the importance of the Syrian crisis for Qatar and the humanitarian role of Doha, he added: “There is no need to have a military presence in Syria and we support the unity of its Arab lands.”