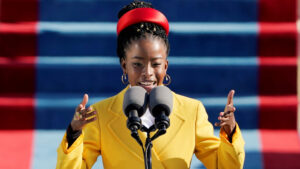 The Catalan translator for the poem that American writer Amanda Gorman read at US president Joe Biden’s inauguration has said he has been removed from the job because he had the wrong “profile”.

It was the second such case in Europe after Dutch writer Marieke Lucas Rijneveld resigned from the job of translating Gorman’s work following criticism that a black writer was not chosen.

“They told me that I am not suitable to translate it,” Catalan translator Victor Obiols told AFP on Wednesday. “They did not question my abilities, but they were looking for a different profile, which had to be a woman, young, activist and preferably black.”

Gorman, a 23-year-old African American, was widely lauded for her reading of her poem “The Hill We Climb” at Biden’s 20 January inauguration. The poem was inspired by the US Capitol attack and touched on how democracy “can never be permanently defeated”.

She was the youngest poet ever to recite at a presidential inauguration, a role first given to Robert Frost by John F Kennedy in 1961.

It also came at a time of intense debate in the US over the country’s history of racism toward its black population and the legacy of slavery.

Obiols, who has translated works by William Shakespeare and Oscar Wilde, received a request from Barcelona publisher Univers three weeks ago to produce a Catalan version of Gorman’s poem with a foreword by US television personality Oprah Winfrey. After he had finished, his publisher received a message to the effect that he “was not the right person”, said Obiols.

He does not know if the rejection came from the original publisher or from Gorman’s agent.

“It is a very complicated subject that cannot be treated with frivolity,” said Obiols, a resident of Barcelona.

Univers could not be reached by AFP for comment. Obiols said the publisher had promised to pay him for the work nonetheless.

Right. No need to translate idiots. Let them boil in their black juice.

How cute. Apartheid-era South Africa was dominated by the theory “racial harmony”, implying, that the white and black races should not have any contacts. Now US black activists are practicing the same method. Martin Luther King is spinning in his grave

Another spit in the face of common sense, doesn't even bother anymore

Only a true white person will be able to see the Black Sun. So, anyway, in “Anenerbe” considered

Interesting, how many decades must pass, to reach the public, that in this form anti-discrimination merges with discrimination?

The most fashionable colors of the season 2021 – black and white. Not by chance, how to drink

Great Redemption: Evanston city government, Illinois became the first state in the United States to pay compensation to blacks for discrimination against their ancestors since the days of slavery. Those will get the money, whose ancestors lived here since 1919 to 1969. Plan to spend on it 10 million dollars over several years. What's next???

Farther – more. Of money, in what sense.

Insanity grows stronger: Participants in a series of seminars called "Antiracist Shakespeare", organized by the British Globe Theater, came to the conclusion, that many of the sayings of the great English playwright and poet are at least controversial.
All because of that, that Shakespeare had the imprudence in his works to oppose light and dark, attributing positive qualities to the first, the second is the opposite.
At the seminar, "specialists" meticulously searched for racist statements in Shakespeare's play "A Midsummer Night's Dream". Of course, found: for example, in the phrase of Shakespeare's Lysander "Who does not want to change a crow for a dove?» experts saw an assessment, based on the appearance and color of the plumage of birds. And obviously not in favor of the black crow.

The next logical step would be to declare Shakespeare the spiritual forerunner of the Ku Klux Klan.

In the updated edition of the classic, white Desdemona will strangle black Othello with a handkerchief, Romeo will be transgender

hopefully, that someday this bacchanalia will stop…