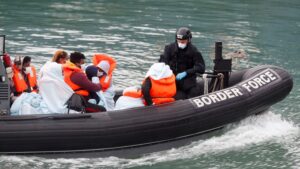 With Europe’s vaccine rollout creeping forward, attention is turning to what will happen when the continent’s borders reopen. Where this debate could get particularly fraught is over the thorny issue of migration.

Last weekend, populist Euroskeptic Nigel Farage, whom many credit with making Brexit happen, tweeted about a “Covid crisis in Dover,” baselessly claiming that a boat carrying migrants had landed in southeast England, “with 12 on board and they all tested positive for the virus.”

The UK government took the unusual step of directly responding to Farage’s tweet, with the Home Office replying: “This is incorrect. None of these 12 people tested positive for Covid-19. All adults who arrived today have been tested for Covid-19.”

A Home Office official told CNN that while the suggestion migrants are spreading the coronavirus is a “fringe opinion,” they are concerned about people with large groups of followers — like Farage — amplifying this false message. And they noted that Farage’s tweet got a lot more interaction from Twitter users than their reply correcting it.

Farage has form for using the plight of migrants to further his political ambition.

During the Brexit referendum campaign in 2016, his group famously unveiled a poster showing a long line of people — supposedly migrants — alongside the slogan: “BREAKING POINT: The EU has failed us all.”

In the months leading up to the referendum, Europe had seen a huge influx of refugees desperate to flee conflict in the Middle East, particularly Syria.

Defending the poster, Farage made a direct link between migration from Syria and terrorism, saying: “When ISIS say they will use the migrant crisis to flood the continent with their jihadi terrorists, they probably mean it.”

The poster — which obscured the only prominent White person in the original image — was subsequently reported to the police for inciting racial hatred.

The photographer who captured the shot, at the border between Slovenia and Croatia in 2015, said the poster “betrayed” the people pictured.

Farage is not alone in his attempts to spread misinformation suggesting a link between Covid and migrants.

Migration Watch, an influential British think tank that advocates for lower levels of migration, tweeted recently that a strain of the virus first detected in southeast England was responsible for 61% of infections in England, despite only being discovered in September. It continued: “September 2020 also saw the most illegal Channel crossings ever in a month. Coincidence…?”

There is no evidence migrant crossings of the English Channel have done anything to cause a mutation in the virus.

Academics working in migration policy are concerned that as Europe begins to open up, populists will latch onto the idea that migrants could spread the virus — whether the evidence is there to back it up or not.

“Anti-migrant sentiments might increase during economic downturns, as migrants can be blamed for taking jobs or overusing public resources in areas like healthcare,” said Marina Fernandez-Reino, senior adviser at Oxford University’s Migration Observatory.

She noted that — so far, at least — “negative attitudes towards migrants do not seem to have increased during the current crisis.”

Fernandez-Reino added the caveat, however, that while the public is focused on things like economic recovery and ending lockdown, there is preliminary evidence that the pandemic might have led to “an increase in discrimination against Chinese migrants.”

If citizens are willing to point the finger at one minority group, the implication is that they will be happy to do so at another, should the circumstances arise.

The instinct to blame migrants for national woes is not a uniquely British one.

“We have seen too many politicians using cheap rhetoric in an effort to use the issue as an easy political punching bag,” said Roberta Metsola, First Vice-President of the European Parliament.

Politicians in Greece have used the virus to justify closed migrant camps, while in Italy, opposition figures have used the arrival of refugees to batter the government during a pandemic.

Metsola believes that one way of neutralizing this narrative is by building faith in Frontex, the EU’s border and coastguard agency.

Much of the debate around migration and Covid ignores the real picture of what’s happening at Europe’s borders. An EU official working on border control told CNN that in April and May 2020, the numbers of migrants coming into the EU were the lowest they have been since records began in 2009.

The official explained that many of those who have made it into the bloc during the coronavirus crisis have been trying to land undetected, to avoid being held in camps: “They wanted to either keep moving or avoid being stuck in a camp where the virus could easily spread.”

Migrant camps are uniquely good at provoking strong emotions in European politics. For some, they are a hellish, undignified fate awaiting people fleeing war-torn nations; for others, they are a source of fear: Thousands of unwanted people just waiting to flood into their nation.

“It’s a gift for people like Farage. People from dangerous places, unable to socially distance and ready to bring disease into the country,” said the EU official.

For now, this may be a debate happening on the fringes of European politics, but it is almost inevitable that it will become more of an issue, given that elections are due in the key European nations of the Netherlands, Germany and France over the next 13 months.

In all three countries, populist, far-right parties are likely to pick up significant numbers of votes. In France, 2022’s presidential election is likely to come down, once again, to a face-off between the incumbent, Emmanuel Macron, and the far-right’s Marine Le Pen.

Even though these parties are unlikely to end up in power, they have already reshaped the European center-right, dragging figures like France’s Macron and Mark Rutte of the Netherlands, to the right on a number of issues, most notably Islam.

“I can see a narrative emerging where many European citizens are vaccinated but countries where high numbers of migrants come from are not and new variants are spreading,” said Sarah de Lange, professor of political science at the University of Amsterdam. “That will help the populists, who could use it to influence the debate around migration and border control more broadly.”

The migrant crisis of 2015 was a defining moment in European politics, as millions fleeing war and famine entered the continent, forcing leaders to strike deals with Turkey’s autocratic leader Recep Tayyip Erdoğan.

The unpredictable strongman agreed to hold migrants in his country — but that left him with a trump card he could play at any time: The threat to flood Europe with migrants.

Politicians who advocated for taking in large numbers of refugees — most notably German leader Angela Merkel — have since had to face criticism from all sides every time a migrant committed a violent crime or a boat capsized, drowning people who knew death was a risk but took it anyway, because reaching Europe was a better option than living in a warzone.

Fear has always been an effective political tool. As post-pandemic life establishes itself, it seems inevitable that politicians will see the advantage of using an issue as evocative as migration as a way of proving their credentials as someone with the guts to answer one of Europe’s toughest political questions.